F-35 and Patriot: Poland seriously conceived to fight with the Russians

18 September 2019
10
The deal on the acquisition by Warsaw of fifth-generation American multirole fighters, initiated by the talks between the presidents of the two countries at the White House in June of this year, is acquiring more and more specific features, moving from ambitious plans to the stage of practical implementation. However, this agreement is only the most “high-profile” part of the grandiose military modernization carried out by Poland. Far from being a beggar, but far from the richest country in Europe, he intends to invest fabulous sums in the realization of his own militaristic ambitions. 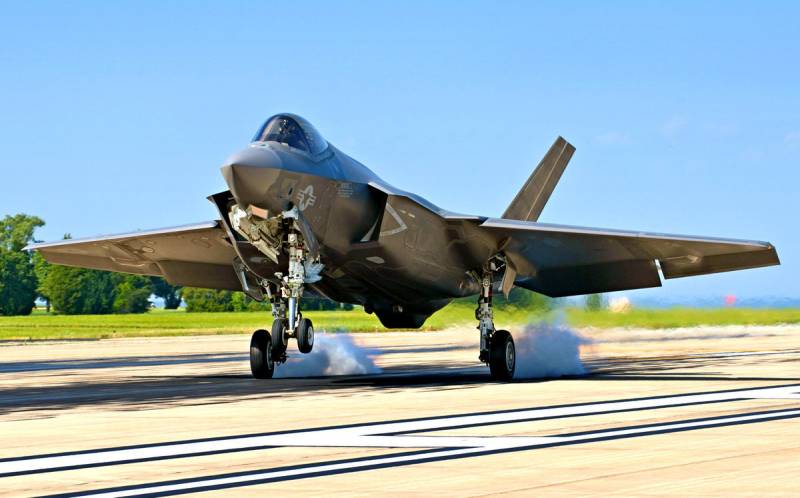 For what specific purpose can all this be done? Against whom exactly do the Poles intend to use the "sword" forged by the Americans, to which they are so eagerly drawn today?

The first thing is airplanes ...

The theme of updating the Polish Air Force fleet has been exaggerated by Warsaw for a long time. Hand on heart, one cannot but admit - in this matter, the Polish army is really "not so hot". Of particular discontent there is the fact that the bulk of the country's military aviation, in fact, is the legacy of that “terrible Soviet past” from which the Poles today so zealously reject - MiG-29 fighters and Su-22 fighter-bombers, manufactured in USSR in the 80s of the last century. In principle, the problem (at least partially) could be solved by modernizing these machines, first providing them with quality technical maintenance and repair, but they don’t want to hear about any military cooperation with Moscow in Warsaw. And they try to expose every emergency situation that occurs with these long-standing aircraft without proper care as “proof” that Soviet (and, incidentally, Russian) equipment is “worthless” and must be replaced. Ideally, the American, of course. However, about five dozen US-made F-16 fighters, which are almost the pride of the Polish Air Force, are almost the same age as Soviet military vehicles and have approximately the same state. In any case, hardly every fifth of them can take off.

As you can see, we decided not to waste time on the issue of acquiring new aircraft, deciding: “To buy is the best!” Well, about the best question is very controversial, but the fact that Warsaw stopped at the most expensive example of a fighter-bomber of all available on the world market is a fact. It was originally planned to purchase 35 aircraft, but had to be limited to 32. However, this shortened version will fall to Poland at 6.5 billion dollars. They plan to get the first 4 fighters there already in 2024, two years later add another dozen to them, well, and the remaining half are expected by 2030. In this case, the question immediately arises, as one wonderful joke says, “the relevance of the use of keyboards in the midst of clergymen”. Roughly speaking: “But why the priest (in this case) this“ accordion ”of the fifth generation at the price of six and a half billion ?!” Warsaw intends to put into service a smaller F-35 than Japan or the UK, but in an amount comparable to South Korea or Israel. Everything is clear with Seoul - there they are afraid of Kim Jong Un. Tel Aviv is in a state of permanent war with almost half of the Middle East. So much for the Poles? Against whom to apply? Let them keep the tales of “containing Russian aggression” for their own diet. It smells of completely different things ...

Poland is not going to limit the process of “pumping up” its own “military muscles” to combat aircraft alone. In the same United States, in addition to the F-35, they are going to buy a very large range of different weapons there. For example, the Patriot PAC-3 SAM, from which the so-called “Vistula Air Defense Line” will be formed. Two full-size batteries: with a radar, 16 launchers and an ammunition load of more than two hundred missiles - all this pleasure will cost Warsaw 4.7 billion dollars. Add to this two dozen M142 HIMARS MLRSs for half a billion dollars, about two hundred ATGMs FGM-148 Javelin, already ordered from the Americans, well, and something else, as they say, "on the little things." In addition, the AHS Krab self-propelled howitzers alone, the Poles intend to stamp at least 120 units in the near future - for as many as five regiments! Warsaw is also trying on the purchase of attack helicopters and even submarines. In a word, of all, more and as deadly as possible. In addition, the most active pace is the buildup in the country of the US military group, and not only in quantitative terms. Among other things, the squadron of American reconnaissance UAVs MQ-9 will soon settle there. Obviously this will be done to make up for more than the meager capabilities of the Polish army in the field of intelligence.

Your will, but all these militaristic attempts are not at all like the declared “strengthening of defense capability”! This year, having built up its own military expenditures to more than two percent of GDP, Poland is beginning to drive into the purchase of American weapons funds that are absolutely impossible for the state to economic opportunities. Such things look logical only in one case - if the country is conducting forced preparations for war, and with a very serious potential adversary. It is also impossible to explain everything that is happening with Warsaw’s only desire to “bend” as low as possible before Washington in order to become his main and most plenipotentiary representative in Europe (at least, Eastern). With such costs for "deflection" and the ridge is no wonder to break! Moreover, conducting the current military-technical policies, the Poles are completely contrary to the actions of the European Union, which has just taken a course at the maximum distance from the United States in matters of modernization and development of its own armed forces. The same Germany and France, instead of throwing money into the American “flying miracle,” prefer to develop their own fighter. And not even the fifth, but just the sixth generation! Italy is also preparing to join them, at one time being one of the most active participants in the F-35 program, but now thinking, if not about leaving it, then about a sharp reduction in purchases of these aircraft.

Again against the Russians?

Say what you like, but there’s no other opponent for a conflict with which Poland might need armaments of this class and in such quantities, except Russia, in nature does not exist! The catch here is that we are not going to attack her (and no one else!). Therefore ... For those who think Warsaw’s possible intentions to unleash a conflict with our country will seem like the author’s wild fabrication, I want to remind you: it was with this country that Russia waged almost the greatest number of wars throughout its history. The most well-meaning historians regarding Poles speak of a dozen of them. Those who look at the question more broadly, looking to the times of the formation of both states, count them twice as much. Alas, observing objectivity, it should be recognized - Russophobia in Poland has been a state ideology and state policy for centuries. Do you think something has changed in the heads of the “hawks” over the centuries that have passed since the attempt to seat his king in Moscow and swallow Russia as a state? I’d venture to upset you very much - just yesterday, September 17, speaking about the 80th anniversary of the accession of Western Ukraine and Belarus to the USSR, torn away by Poland in 1921, its current president, Andrzej Duda, was very penetrating about the “Soviet occupation”, which “cost lives hundreds of thousands of Poles, "tortured and taken to Siberia", calling it "one of the greatest tragedies of the Polish people." They didn’t change their minds and are not even going to.

Naturally, the idea of ​​a one-on-one military confrontation with Russia is too crazy even for the most inadequate politicians in Warsaw. So, after all, they are not going to fight with us alone there. Again, I will give more than relevant historical parallels in this case: in 1812, the Poles marched to Moscow as part of the “united Europe” army under the leadership of Napoleon Bonaparte. In 1939, they dreamed of repeating this experience shoulder to shoulder with the "soldiers of the valiant Wehrmacht." It was not their fault and their merit that the Führer had a completely different opinion on this matter ... It seems that today Warsaw has found another “elder brother”, under whose star-striped banners it’s ready to go on a new “great campaign for East". For the sake of such an exciting event, you can seriously spend money on it, hoping for another attempt to bring to life “Greater Poland is possible”. As a confirmation of my own position, I will also mention the moment that precisely in the United States the actions of the newfound allies are regarded absolutely unambiguously. Headlines like "Great plans for Poland to war with Russia" are full of just the American media. Given that Washington’s global strategy has always been to search in Europe for those who are ready to start a war there for the greater benefit and well-being of the United States, their enthusiasm is understandable.

And you can reproach me with any "thickening of colors" and "escalating the situation." You will find weighty arguments in favor of another explanation for the frantic militaristic fuss of Warsaw, its attempts to build up its own military power beyond all reasonable limits - then we'll talk. In the meantime, Russia, perhaps, should attend to the maximum strengthening of its western borders.
Ctrl Enter
Noticed oshЫbku Highlight text and press. Ctrl + Enter
We are
Wars on distant approaches: Russia has already begun to act
Ten "defeats" of Putin
Reporterin Yandex News
Read Reporterin Google News
10 comments
Information
Dear reader, to leave comments on the publication, you must sign in.