5 September 2019
10
And again about Yellowstone. The American supervolcano is not a topic that is easy and simple to brush aside. The problem is that he increasingly gives occasion to talk about himself. But, as you know, the trouble does not come alone. The recent discovery of scientists in Antarctica presented a much more unpleasant surprise. 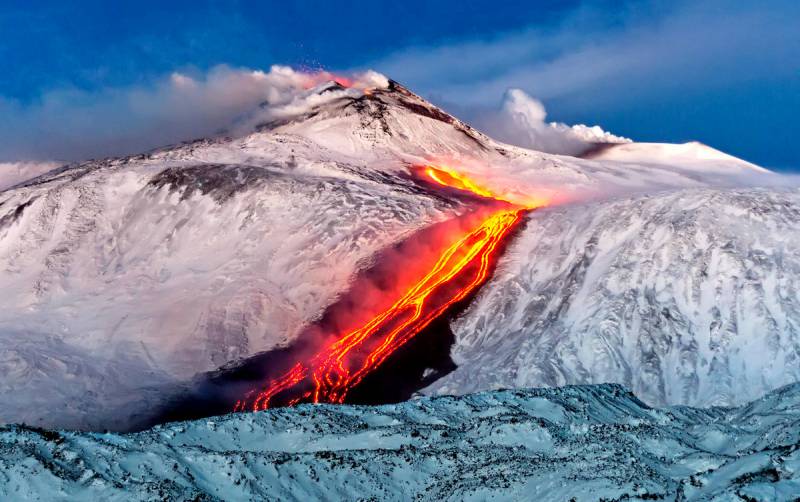 The Yellowstone Super Volcano, or rather, the caldera, is located in Wyoming in the national park, occupying a third of it. From the point of view of geology, this is in every sense of the word "hot spot": a huge bubble of molten magma, a covered plateau.
Three eruptions of Yellowstone are known: 2,1 million years ago, 1,3 million and 640 thousand years ago. It is not difficult to see a certain pattern in these geological phenomena that occur with a frequency of 600-800 thousand years. Judging by the dates, then right now we are in that historical interval when "it is time".

The volcanic specialist, Brian Walsh, describes the inevitable eruption. First, a strong earthquake will occur, which will indicate the movement of magma to the surface. Then an explosion of the caldera will follow, and the lava will flood within a few days, all within a radius of 65 kilometers from the volcano. Clouds of hot ash will destroy vegetation at great distances, damage infrastructure, power lines, and disrupt water supply.

Even for a superpower like the USA, this will be a real disaster. But not only Americans will get it. The release of ash into the atmosphere will cause an ongoing long-term winter, which will lead to enormous damage in agriculture on the whole planet, starvation and the extinction of many species of animals and plants. Mankind as such will survive, but will face the grave problem of hunger and the inevitable in this case armed conflict over resources. Civilizations in the form as we know it will be dealt a crushing blow. After Yellowstone, everything will be different.

The facts are such that it is simply impossible not to notice the gradual awakening of the volcano. Earthquakes are becoming more frequent. Around Yellowstone, more and more thermal zones are discovered, places where magma comes very close to the surface. So, a week ago a thermal zone appeared, the temperature in which is so high that the trees turned into coals, and the earth was simply burnt out.

By the way, American researchers have calculated and established that a blow to the planet of a large celestial body (meteorite) will inevitably cause an eruption of already boiling Yellowstone. The idea of ​​a hypothetical nuclear strike on a supervolcano in the event of a war with the United States was even discussed in domestic media and social networks. However, the following must be considered.

According to PlanetToday, recently under the ice of Antarctica, scientists have found a whole group of volcanoes. It turned out that one of them is even bigger and potentially more dangerous than his American counterpart. The eruption of such a "monster", and even in the thickness of millennial ice, will cause a catastrophic destabilization of the Antarctic ice sheet. Billions of tons of fresh water will pour into the oceans, which will lead not only to a rise in the level of the latter, but also to a disruption of the main ocean currents, in particular the Gulf Stream. Melting of only 2% of the Antarctic ice sheet is fraught with flooding of cities such as New York, Amsterdam, Shanghai and many other coastal megacities. The vast majority of islands in the Indian and Atlantic oceans will forever go under water.

However, we do not specifically touch on the issue of ash discharge by the Antarctic supervolcano. The consequences of such an event are felt by all the inhabitants of the planet, wherever they are. In addition, huge emissions of water vapor generated due to the contact of hot lava and frozen ice will have a detrimental effect on the Earth’s climate. Long rains in conjunction with the ashes will turn entire regions of the planet into uninhabitable space.
Ctrl Enter
Noticed oshЫbku Highlight text and press. Ctrl + Enter
We are
Yellowstone Volcano Destroys Half America
Where is Russia going?
Reporterin Yandex News
Read Reporterin Google News
10 comments
Information
Dear reader, to leave comments on the publication, you must sign in.