The consequences will be very soon: what did Bolton do at the borders of Russia?

2 September 2019
17
To call the recent tour, the adviser to the President of the United States on national security issues, John Bolton, "Eastern European," as some media do, would perhaps be fundamentally wrong. The countries he visited - Ukraine, Moldova and Belarus, are primarily the former republics of the USSR. Two of the three states share a common border with Russia, and those who voluntarily, and who unwittingly, are closely connected with it. 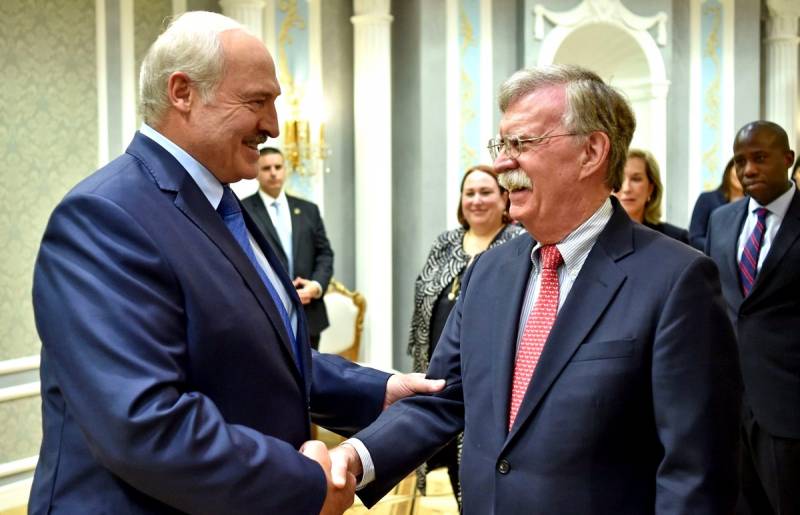 Bolton’s trip, in fact, was a “hawkish” flight of our borders, which was not done with good intentions. And this is no assumption and no exaggeration, since this thesis is fully confirmed by the very specific events that followed it.

Against Russia, Against China

Of course, the countries mentioned above have very significant differences. Ukraine is a completely ulus controlled from Washington, in fact, a US colony. Moldova can be classified as “hesitant”. At least for now, while Chisinau, being in a state of very unstable political equilibrium, is simultaneously trying to strive for the West, but at the same time not spoil relations with Moscow. In any case, up to the stage to which Kiev managed to do this ... Belarus, it would seem, is a completely “pro-Russian” state, almost the only, alas, in the entire post-Soviet space. However, it is very likely that on such illusions you can put a bold cross. Minsk’s foreign policy vector didn’t even begin to gradually, but rather rapidly move towards the United States. Be that as it may, it remains to be assumed that the visit of John Bolton to all the mentioned capitals had some clear common goals, which were pursued in all three cases. At the same time, the identity of the American policy - a notebook reactionary and a supporter of the most tough foreign policy decisions. They certainly won’t send such a mission to the world ...

For Kiev and Minsk, the common denominator, without a doubt, is Washington’s anti-Chinese policy. While in Ukraine, Mr. Advisor, as the last boy, chastised the president there for the sale of the celestial notorious Motor Sich. Bolton’s position was especially strengthened by the whip, specifically shown to Zelensky, in the form of Donald Trump’s conversations about the possibility of reviewing (to reduce, if not stopping at all) the country's military assistance program. Gingerbread was also revealed, but it will be described in detail below. With Belarus, the picture is about the same. Bolton didn’t hide this in any way, in his own interview telling about how, “on the way from the airport,” he literally poked a finger at a Huawei-hated store for Americans, thereby expressing Lukashenko his utter dissatisfaction with the ever-growing Chinese presence in the country. A very remarkable detail, by the way, is about the airport. Meeting the guests who arrived in Minsk at the gangway - Alexander Grigoryevich is far from honored by all of them. And then, look - rushed. There is no doubt that Mr. Advisor, in an extremely concrete and categorical form, advised the leaders of both states not to have anything to do with the Celestial Empire at all.

As for Moldova, here in the foreground, of course, was the anti-Russian agenda. Arranging the “bridegroom” and instructing Maya Sandu, before her first official trip to Washington, Bolton did not miss the opportunity to “solve” other issues. In particular, he said that the United States intends to get involved in the disposal of ammunition in the warehouses of the Transdniestrian Moldavian Republic, which, in fact, was recently brought up by the Minister of Defense of Russia, Sergei Shoigu. And this is despite the fact that the President of the Transnistrian Republic, Vadim Krasnoselsky, who supported this initiative, has already managed to emphasize several times - such a process, if it is started, can be considered solely as an internal matter concerning only the PMR and Russia. Nevertheless, the United States seems to have a completely different opinion on this matter and is eager to use recycling, as an excuse for their military to appear both in Moldova and in Transnistria itself. Very alarming. However, Bolton did not abandon attempts to “put a pig” in Moscow in Minsk either. His obsessive talk about the “readiness of the United States to support the independence of Belarus,” coupled with the American side as an example of such actions, its “broadest defense cooperation” with Kiev sound more than unequivocal. This is not even subtext, but more than a concrete hint of Lukashenko ...

Well, now, in fact, about the events that, in my opinion, have become a direct continuation of John Bolton's tour. Apparently, this was, among other things, a preparatory stage before the summit of the heads of several states in Poland, for which the anniversary of the start of World War II was only an occasion and a screen. As it became known, on August 31, representatives of the United States, Poland and Ukraine in Warsaw signed a memorandum on joint activities in the energy sector. At the official level, it has been announced that its goal is to “create an independent market for liquid regional gas in Central and Eastern Europe.” However, the head of the National Security and Defense Council of Ukraine, Oleksandr Danilyuk, who announced this, as he believes, is a “historical” event, was more frank in his comments. He told about a completely different task of the new alliance: “squeezing Gazprom from the European market”. So - no more, but no less ... This is, without a doubt, the same “carrot” for “fresh”, which Bolton promised in Kiev for “correct behavior” regarding the Chinese. Kiev Minister economics and ecology, Aleksey Orzhel, already publicly dreams of the “billion cubic meters of American gas” that the Poles will soon provide to Ukraine. But this is not the main point.

Before our eyes, the United States began a large-scale operation to cut Russia off from the EU’s energy markets, which has been talked about for so long. With Ukraine, in general, everything is clear ... Moldova not so long ago announced its desire to receive Russian gas from the upcoming Turkish Stream launch. You can argue - in the very near future in Chisinau, big disagreements will begin on this. Belarus, on the other hand, is a “gateway” for Russian oil, which goes, again, to Europe. Do you really think that Bolton’s Minsk visit and Belarusians ’attempts to“ switch ”from our oil to American are completely unrelated? Do you believe the assurances of the head of the Belarusian Foreign Ministry, Vladimir Makei, that “there is no need to build any conspiracy theories about the talks between Lukashenko and Bolton?” Well, first of all, he was simply put out from the middle of the meeting, intending, apparently, to discuss issues not even intended for the ears of the country's main diplomat. And secondly, I have to upset you even more, especially those who claim that by refusing to travel to Warsaw, Lukashenko "has proved his allied position with regard to Russia." Alexander Grigoryevich, of course, was not there, but on the Internet pictures from one extremely interesting meeting that took place at the Polish National Security Bureau were perfectly accessible. The secretary of the Security Council of Belarus Stanislav Zas, his Ukrainian counterpart, and ... Yes, the same John Bolton!

And what then is the whole “allied position” ?! Trump, too, did not go to Poland. But then his team there turned around in full, turning the anniversary events into something completely different. By golly, one gets the feeling that Lukashenko in Minsk a high-profile American guest voiced some serious proposal, and given an extremely limited time to think it over. And the answer to Warsaw was delivered by Mr. Zasem. However, this is all conspiracy theology, gentlemen ... And nothing more. But what exactly is not conspiracy theories and fiction is the statement made in the same Polish capital, US Secretary of Energy, Rick Perry. After a meeting with Ukrainian and Polish presidents, this senior Washington official announced that “sanctions pressure on Russia” (presumably, primarily in the energy sector) will not only continue, but “will most likely be expanded ". The US Vice President, Mike Pence, who was present in Warsaw, spoke of “a firm intention to continue supporting Ukraine,” and, again, great views of it precisely on issues related to energy resources, urging “all US allies to defend with them ". Need to explain against whom?

It is very similar to the fact that by “pushing” John Bolton from too global issues in which he was eager to “break firewood”, such as crises with Venezuela and Iran, the White House simply threw him to the “Eastern Front”. Well, this representative of Washington’s most warlike political circles is not to take up the devilish energy or the desire for the most destructive actions. Russia clearly has to face their consequences in the very near future.