Why is Denmark time to say goodbye to Greenland

August 22 2019
14
So, the information about Donald Trump's desire to buy Greenland turned out to be no joke. The American President, offended by the refusal of Copenhagen and the hysterical reaction of the Danish politicians, postponed his official visit to the Kingdom with a rather ominous wording "for later." How far is Washington ready to go in its next expansionist project, and against whom will this new Arctic redoubt actually be directed? 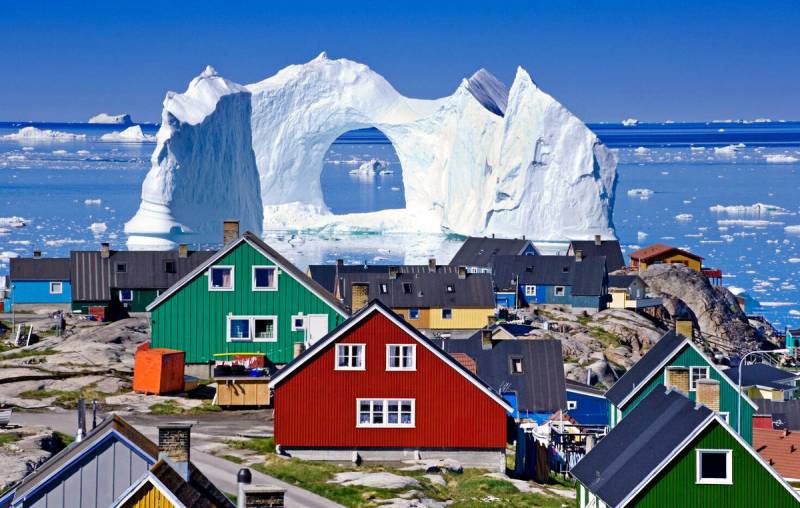 It is believed that the United States is gaining ground in the Arctic to confront Russia. There is a lot of truth to this, but not all.

Indeed, the Kremlin is rapidly expanding its nuclear icebreaker fleet, investing heavily in the development of infrastructure in the Far North, where huge natural resources are concentrated. But the key project here is the Northern Sea Route, the shortest waterway leading from Asia to Europe. So, his main interest is, first of all, China.

Celestial, for all its economic power, is, figuratively speaking, an “island” cut off from its main markets in the USA and the EU by the ocean, on the one hand, and by vast expanses of land, on the other. Goods produced in China still need to be delivered to the consumer. Hence the gigantic investment that Beijing is making in the New Silk Road infrastructure project.

Today, the United States is waging a trade war with China by imposing protective duties, but if a compromise is not reached, they will start setting fires in countries through which Chinese transit goes. If necessary, the Americans with their allies are able to block the Mollak Channel, connecting the Indian Ocean with the Pacific, for the Celestial Empire. It will only have to be uncorked by force, for which Beijing is building more and more new aircraft carriers.

There remains a cold and calm Northern Sea Route controlled by China friendly to Russia. Moscow is designing the Leader icebreakers, which will be able to provide navigation even in the winter. The PRC as an “experiment” is building its own first icebreaker, surprisingly reminiscent of our “Arctic”. It is interesting that the Chinese themselves have long laid eyes on Greenland. They are engaged in ore mining on the island and even wanted to buy an old Danish Arctic station there, supposedly to open a "hotel". Then it turned out that the “hotel” would be only for Chinese polar explorers, and, under US pressure, Copenhagen refused the deal.

What exactly can Greenland give Washington?

At first, after the transition of the island to the sovereignty of the United States of America, their claims for a share of the "Arctic pie" are sharply increasing.

Secondly, with almost lifeless Greenland, the Pentagon takes on the ICBM sight not only the territory of Russia, but the entire Northern Sea Route with its medium-range missiles. Fortunately, so on time the INF Treaty has sunk into oblivion. That is, two birds with one stone are killed at once, Russian and Chinese.

Thirdly, do not forget that the island and the adjacent shelf are rich in natural resources, in particular - oil. Today they are classified as difficult to recover because of the harsh climate, but the polar ice is melting rapidly not only on the NSR, but also on the island.

It turns out, "we must take." But how, if in Denmark and on the island they already said their “fi”?

Note that Donald Trump intends to Greenland not to take, but to buy. It is assumed that a certain one-time amount will be paid and annual redemption payments will follow. This is not the first time for Copenhagen, the Danes already in 1917 sold the United States their possessions in the West Indies, which are now called the US Virgin Islands.

So that Copenhagen does not lose face as a “merchant of the Homeland,” there is a realistic scenario with a referendum. The population of Greenland does not exceed 60 thousand people, from infants to the elderly. Specially trained people can carry out explanatory work with them about how healthy and profitable it will be to become US citizens, to attract local elites and opinion leaders to their side. So the Danish princess, Antonia Schaumburg-Lippe, prudently stated:

Such an offer is a compliment for magical Greenland. The island could go to the United States if the locals want it.

The referendum, plus some Danish compensation for the trouble, and the job is done. In general, it will soon become crowded and hot in the Arctic. But there is no silver lining. The current diplomatic confrontation with the United States makes it possible for Copenhagen to skip the topic of the ban on the construction of Nord Stream 2 under a plausible pretext.

We are in Yandex Zen
It's important
10
“Ice is melting between us”: the decisive battle for the Arctic is getting closer
Ten "defeats" of Putin
Reporterin Yandex News
Read Reporterin Google News
14 comments
Information