How to radically solve the problem of water supply in Crimea?

August 15 2019
39
The election of Vladimir Zelensky as president of Ukraine initially gave some reason to hope for a change policy Kiev in relation to the Crimea. Recall that in 2014, after its transfer to the Russian Federation, the Maidan regime stopped supplying water to the peninsula through the Severokrymsky Canal. According to it, Crimeans received about 85% of fresh water. However, apparently, hopes for Zelensky turned out to be unfounded. 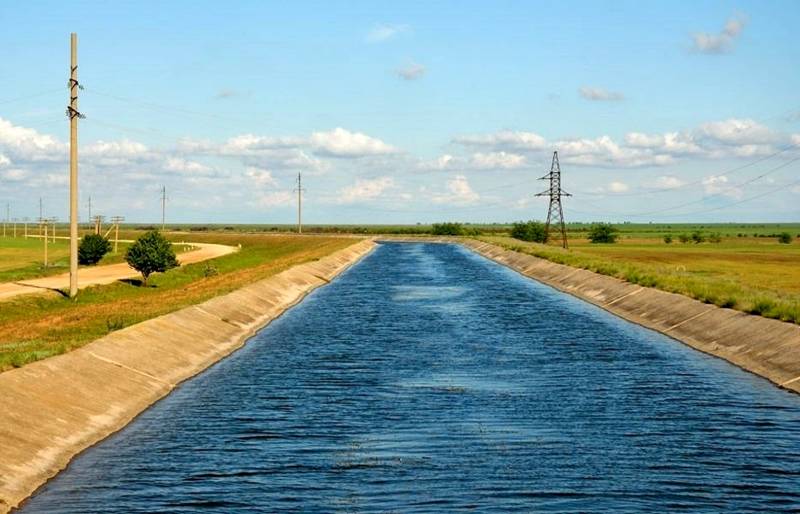 The authorities of the republic announced that they intend to initiate a negotiation process between Moscow and Kiev on the lifting of the blockade. In addition to the good will of the new president, an undoubted fact is cited as a legal argument that the Dnieper River is transboundary, as it passes through the territory of three states at once, and takes its origins directly in the Russian Federation. Thus, Kiev flagrantly violates international law by depriving Crimea of ​​Dnieper water.

From Ukraine, they immediately responded to the initiative of Simferopol. Someone Anton Korinevich, who is the virtual representative of President Zelensky in the Crimea, said that the Dnieper does not pass through Crimea:

Ukraine did not block the Dnieper River, but blocked technological construction (canal), which is located in Ukraine. Ukraine has every right to do so. By all accounts, there is enough fresh water in Crimea for the needs of the population.

A Ukrainian official believes that Crimeans have enough water, but is that so?

Indeed, no one has died of thirst on the peninsula. But the actions of Kiev, Crimea caused serious economic and environmental damage. Crimean agrarians lost rice growing as an industry. Due to the lack of fresh water for irrigation, viticulture and horticulture were affected on the peninsula. Many farmers were forced to switch to growing other, less water-intensive crops. According to the estimates of the Ministry of Agriculture of Crimea, due to the Ukrainian blockade, losses amount to about 14 billion rubles a year. Many previously irrigated lands are now abandoned.

Another thing is scary. In order to mitigate the consequences of the blockade, the authorities were forced to print water supplies in artesian wells. This partly offset the problem, but created a new one. The mineral-rich water used for irrigation began to salinize the soil, leading to its infertility. Thus, a man-made environmental disaster is growing.

Even worse is what has already happened in the north of the peninsula. Due to the shortage of fresh water in the acid storage facilities of the Crimean Titan enterprise, in the city of Armyansk, last year there was a release of dangerous acid fumes into the atmosphere, which caused enormous environmental damage and even forced to evacuate part of the population from the city.

This has not been funny for a long time; one can no longer turn a blind eye to it, allowing Kiev to hide behind the wording “I have the right”. The appeal to international law is true, however, the rules chosen are incorrect. The actions of Kiev, "punishing" the population of the peninsula for its choice in favor of Russia, completely fall under the definition of genocide:

Genocide - a form of collective violence, acts committed with the intention of destroying, in whole or in part, any national, ethnic, racial, religious or other historically established cultural and ethnic group.

Genocide can be carried out in several ways. And the actions of the Ukrainian authorities, which blocked the water supply of the peninsula, and thereby created the conditions for an environmental disaster in a unique region, completely fall under the "deliberate creation of living conditions designed for the complete or partial physical destruction of this group." Genocide is an international crime, and the Criminal Code provides for a very severe punishment, up to the death penalty. With appropriate political will, the Russian Ministry of Defense has the right to eliminate the danger to the Russian region by taking control of “technical facilities”.

Recall that at one time, Israel seized from Syria and occupied the Golan Heights, because of their strategic position, and their role in supplying the Jewish state with fresh water. And this year, the United States recognized Israel's sovereignty over the Golan. And neither the Jewish nor the American state asked anyone for permission.

We are in Yandex Zen
It's important
17
Ukraine from the inside: traitors, curators and those who watch from the Kremlin
Ten "defeats" of Putin
Reporterin Yandex News
Read Reporterin Google News
39 comments
Information