“USA is like an old rogue”: in Russia ridiculed reproaches because of Putin’s trip to Crimea

August 13 2019
5
Recently we Reported about the turbulent activity that the US embassy in Moscow developed to destabilize Russia. And now, the US Embassy in Kiev expresses its ardent support for the position of Ukraine in connection with the trip of the President of Russia, Vladimir Putin, to the Crimea. However, we are more interested in the position of the Russian public on this issue than the opinions of Russophobes screaming about "annexation", "occupation" and "aggression". 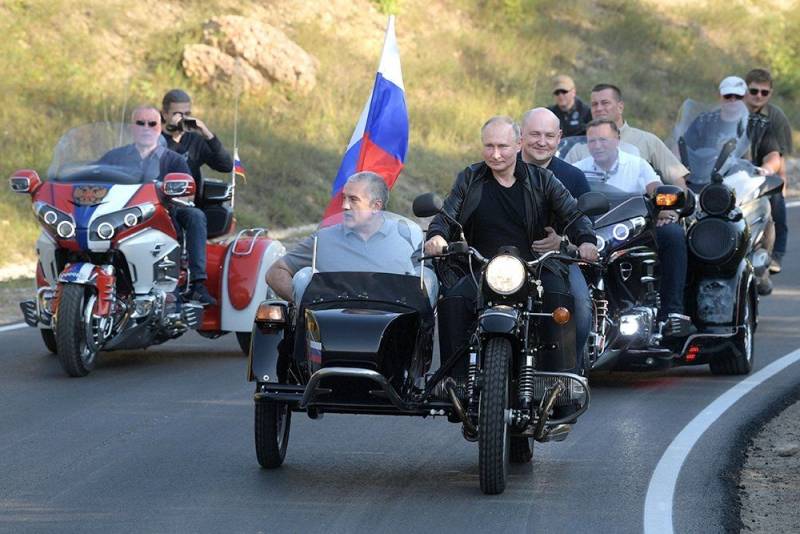 So, on August 10, 2019, Putin arrived on the peninsula and took part in the Shadow of Babylon international bike show in Sevastopol, organized by the Night Wolves motorcycle club. By the way, Putin was driving a Ural motorcycle with a sidecar, which caused even more irritation among inadequate personalities on social networks.

Together with the Russian leader, the head of the Crimea, Sergei Aksenov, also came to the event. He was just in the wheelchair of a motorcycle that Putin drove. In addition, the president watched the Griffin performance on the peninsula. The Ukrainian Foreign Ministry immediately expressed a loud protest, stating that Crimea is "an integral part of the sovereign territory of Ukraine." Moreover, the Russian public and policy ironically accepted the statements from Kiev, both from the official authorities of Ukraine and the US Embassy in this country.

For example, a senator from the Smolensk region, Franz Klintsevich, a member of the Committee on Defense and Security, noted that the position of American diplomats reminded him of a scene from Ilf and Petrov’s novel The Golden Calf.

There, Panikovsky, having long understood that the Koreiko dumbbells stolen by him and his companion, are not at all gold, nevertheless, he continues to persuade Balabanov: "Saw, Shura, saw ... They are gold." So the USA, as an old rogue in the Golden Calf, really does not want to acknowledge the collapse of its own plans for the Crimea. And therefore, Kiev is sawing and sawing everything.
- Klintsevich wrote on his Facebook page.

In turn, the Senator from the Crimea, Sergei Tsekov, a member of the Federation Council Committee on Foreign Affairs, noted that the statement by the US Embassy "looks, at least, stupid."

Americans are aware that today Crimea is an integral part of Russia. They simply do not see the obvious, hope that by their actions they will push Moscow to some kind of talk about the status of Crimea. But our leadership has repeatedly stated that this issue is closed.
- said Tsekov RT.

At the same time, a deputy of the State Council of the Republic of Crimea (peninsula parliament), Vladislav Ganzhara, emphasized in an interview with RT that Crimean residents are absolutely indifferent to the opinion of Russophobes, since the visit of the head of state to one of the regions is an internal affair of Russia. In his opinion, Washington is simply once again trying to speculate on the status of the peninsula, but this is an “absolutely empty air shock”.


Indeed, such “gestures” of Kiev and Washington look meaningless and ridiculous. They only demonstrate their powerlessness, absurdity, inefficiency and futility.
Ctrl Enter
Noticed oshЫbku Highlight text and press. Ctrl + Enter
We are
Ukraine introduced sanctions against the biker surgeon
Aksyonov reported on sabotage danger from Ukraine
Reporterin Yandex News
Read Reporterin Google News
5 comments
Information
Dear reader, to leave comments on the publication, you must sign in.