“Get on your knees!”: APU marine father turned to Zelensky

August 7 2019
6
Recently, we informed readers about how near Mariupol perished Four Marines of the 36th Armed Forces Brigade and as President of Ukraine Vladimir Zelensky called Russian President Vladimir Putin about the exacerbation in the Donbass. And so, it became known that the father of one of the Marines, who continues to serve in the Armed Forces, Eduard Litvinenko, turned to Zelensky, posting on Facebook a call for war and further bloodshed. 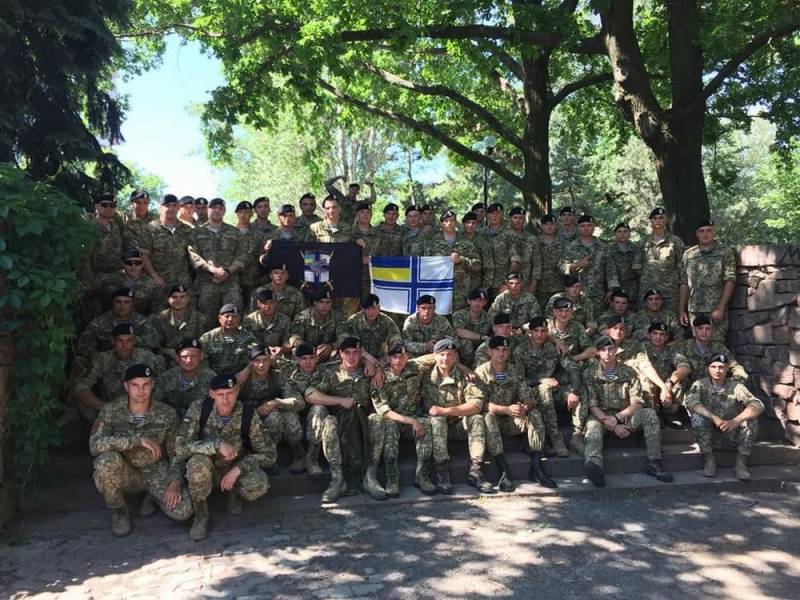 It should be noted that many Ukrainian-speaking web users have already commented on the “appeal” of this “patriot,” as the frank hypocrisy of the Russian-speaking “gunman.” After all, his "screaming" post, many initially perceived as the pain of a father for his dead son. Therefore, we are forced to cite the text in its entirety, removing only obscene words from it. After that, you yourself will understand what kind of person could write this.

And now, act, Supreme!
Four dead! In time!
Those who died on the background of your words about “stop shooting”, “let's talk about the Russian language to Donbas”, “we will lift the blockade”, “Putin is a [obscene word - ed.] Man” (words of your friend Shefir).
You have reached the edge, Supreme!
Get up, pick up the [obscene word -ed.] Of your assistants. Four assistants - Bogdan, Shefir, Kosheva, Razumkov, Zhidkov-Tambov-wolf - choose whoever you want.
Let your assistants put four stitched bodies in their last camouflage on the cold tables of the Mariupol mortuary. Turning away from their closed eyes, they will put on bodies forbidden by bespectacled freaks, but such Marpekh vests, beloved by fighters.
And let these assistants, in suspenders of the POHUI company, each of them accompany the body of the deceased.
Four dead - four assistants in different cities of Ukraine.
And let the mothers of the dead scratch your hair and eyes, let their howl over the terrible grave pit stand in the souls of your sixes while they are alive. And let them answer the mothers of the dead - FOR WHAT and WHY their boys died.
You woke up, put your feet in warm slippers and half asleep scribbled your signature under an appeal to Merkel, Macron and Putin to get together and discuss what happened ay-ay-ay! DISCUSS ???????
The guys of this first Theodosian battalion of the Marine Corps are the last among the Ukrainian military units of the Crimea, who did not surrender to the Russian invaders.
They went to Ukraine to take revenge and defeat!
Return Lugansk, Donetsk, Crimea, Sevastopol, native Feodosia! You, Supreme, urge them not to shoot ???
Go, bury these guys, and tell their mothers about it ... Say that you will not forget that you will do everything possible, that the guilty will suffer ...
And be sure to put your shoulder under the coffin when the boy will be carried to the cemetery. And tell your helpers ...
And then, maybe in your cowardly stomachs, eaten away by alcohol, drunk while entertaining local and Russian politicians-oligarchs, nausea from their own [obscene word -ed.] life is shaking.
Get on your knees, lovers do not shoot. Deadly sin on you - complicity in the murder ...
BECAUSE! [to revenge - ed.]
Don, father of the marines.
PS NON-PROFESSIONAL JOURNALS !!! DO NOT WRITE THE REPRESENTATIVE “FATHER OF THE DIED MARINE”. MY SON IS ALIVE AND TOGETHER WITH ALL WARRIORS CLOSING OUR VICTORY !!! GLORY TO UKRAINE!!! KILLED - ETERNAL MEMORY!
- wrote the Ukrainian "patriot", a man-hater.

It should be recalled that in the 35th and 36th separate naval infantry brigades the most irreconcilable Ukrainian "patriots" were selected, ready to fight with the "invaders" and "aggressors" to the very end. And Litvinenko knows well where and why his son is serving. But Litvinenko did not feel the bitterness of losing his son, and therefore calls for a continuation of the war.
Ctrl Enter
Noticed oshЫbku Highlight text and press. Ctrl + Enter
We are
“Our people are being killed”: Zelensky called Putin due to aggravation in the Donbass
Ukraine brought the APU in the Donbass in full combat readiness
Reporterin Yandex News
Read Reporterin Google News
Ad
We are open to cooperation with authors in the news and analytical departments. A prerequisite is the ability to quickly analyze the text and check the facts, to write concisely and interestingly on political and economic topics. We offer flexible working hours and regular payments. Please send your responses with examples of work to [email protected]
6 comments
Information
Dear reader, to leave comments on the publication, you must sign in.