From the Volga to the Yenisei: the most powerful missiles of the future

July 27 2019
3
Super heavy launch vehicles are rare guests news summaries. The most powerful of all, these missiles are also the most technologically sophisticated and expensive, which in this age of economy clearly plays against them. On the other hand, each launch of such a rocket is a real event, because, as a rule, the most difficult and responsible missions fall on the shoulders of the "superheavy". 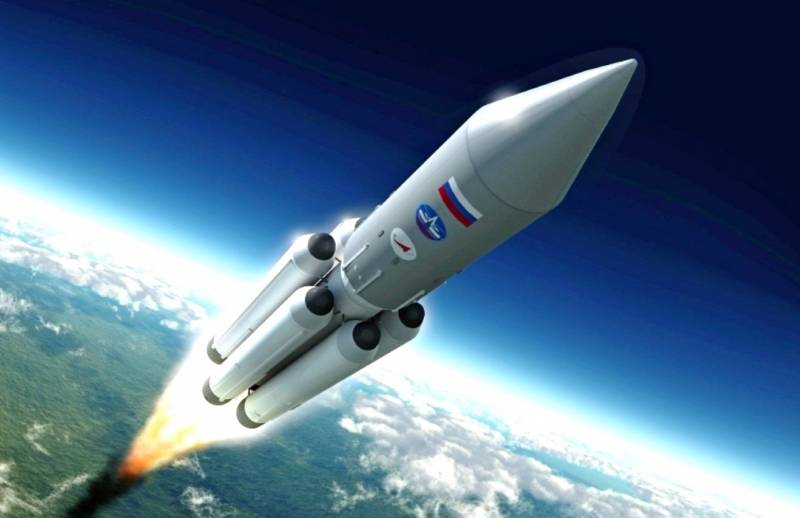 Recall that the landing of a man on the moon became possible, thanks to the engineering genius of NASA employees who designed the superheavy carrier Saturn-5. Which even now remains the most lifting, the most powerful, the heaviest and the largest of the mankind created by mankind, which brought the payload to orbit. Its analogue - the Soviet "lunar" rocket N-1 - has not yet reached the stage of readiness.

In the future, Russia wants to get a whole family of superheavy rockets that can deliver astronauts to the satellite of our planet. However, so far the USA is ahead again. Suffice it to say that now the only super-heavy missile in operation is the Falcon Heavy. This is only the beginning. 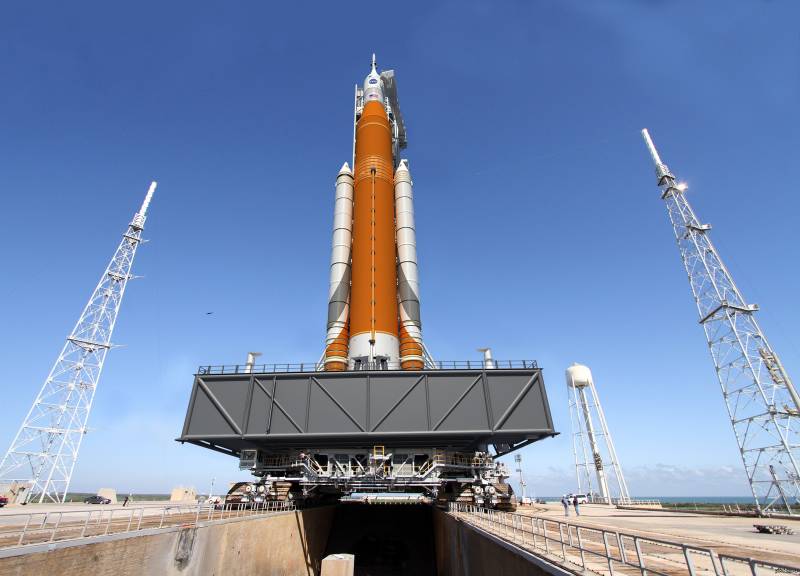 This carrier, actively developed by Boeing Corporation, will move the aforementioned Falcon Heavy off the pedestal, becoming the most powerful (in all respects) missile on Earth. The complex in the basic version will be able to display 95 tons of cargo in a low reference orbit: for Heavy this figure is 63 tons. The difference is very great. In the future, the developers want to increase the mass of the Space Launch System to 130 tons, which will bring the rocket closer to the Saturn-5. Of course, the launch price of a promising carrier is simply "fantastic": $ 500 million (estimated). For comparison, the heavy Falcon 9 has a launch price of 60 million. Previously, they wanted to use the potential of the Space Launch System for flights into deep space, including to Mars. Now the plans are more modest - to ensure the delivery of goods and crews to the future lunar orbital station Lunar Orbital Platform-Gateway. The first flight of the rocket may take place in 2020. 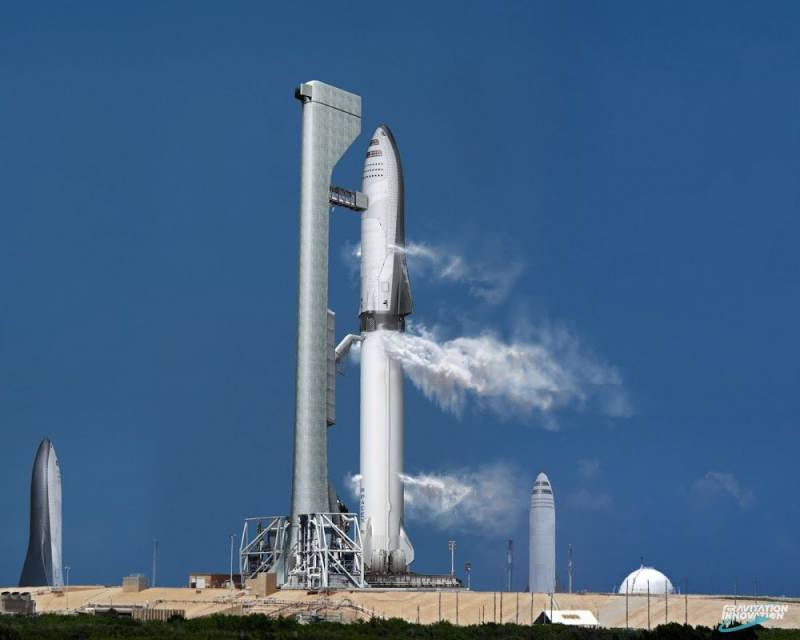 Remember the dream of Ilon Mask about the migration of a million people to Mars? So, she is still alive, although she has undergone some metamorphoses. “Smoke is smoother and the pipe is lower,” - something like this can describe the new version of the Big Falcon Rocket in comparison with the Interplanetary transport system, introduced in 2016. Now the diameter of the rocket is not twelve meters, but nine. The payload brought to a low reference orbit has decreased from 300 tons to 100. At the same time, the concept, as before, can boast a huge number of mid-flight engines in the first stage - we will recall 31 of them. You will have to forget about saving forever: a rocket will be very expensive. Another seven engines will be installed on the Starship spaceship, which will act as the second stage of the complex. Why all this is necessary in the XNUMXst century is hard to say. The United States has not had any specific plans for landing on Mars, and flights to the Moon involve the use of other carriers, including the Space Launch System. But if someone wants to believe in the beautiful dream of the head of SpaceX, then this is his full right. 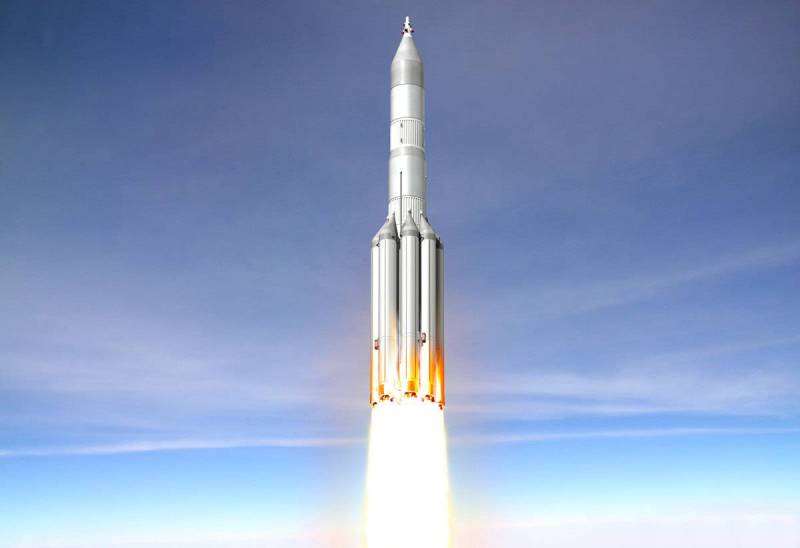 The future of Russian super-heavy missiles is primarily associated with the Yenisei project. Let us remind you that this is the main instrument of Russia's conquest of the satellite of our planet. Well, or, at least, the country's authorities see him as such. First of all, it must be said that this rocket will become the development of ideas laid down in the USSR. Thus, the side boosters of the Yenisei will be modified versions of the promising Russian Soyuz-5 rocket, which is nothing more than a more modern version of the Soviet Zenit rocket. Let us remind you that the production of Zenits remained in Ukraine, and their supplies, due to political disagreements between countries are difficult. Like Zenit, Soyuz-5 will use the RD-171 liquid-propellant rocket engine, or rather, its new version, the RD-171MV. The promising Volga, also known as Soyuz-7, will play the role of the central unit for Yenisei. She will receive the RD-180 engine.

On the basis of "Yenisei" can create an even more powerful missile, designated "Don" and is, in fact, a heavier version of the first. The main difference from the Yenisei rocket will be the addition of one more stage. The characteristics of both missiles have recently become known. “The first rocket has a launch mass of 3167 tons and is capable of delivering a payload weighing at least 100 tons to low-earth orbit, 26 tons to geostationary orbit, and 27 tons to the Moon. The second, more powerful rocket, has indicators, respectively, 3281 tons, 140 tons, 29,5 tons and 33 tons, "RIA Novosti reported in April last year. In simpler terms, the Don may be the most powerful missile in the world. However, his birth is still very, very far away, and it cannot be ruled out that the country will ultimately abandon both the Don and Yenisei altogether. Lunar ambitions seem too costly. 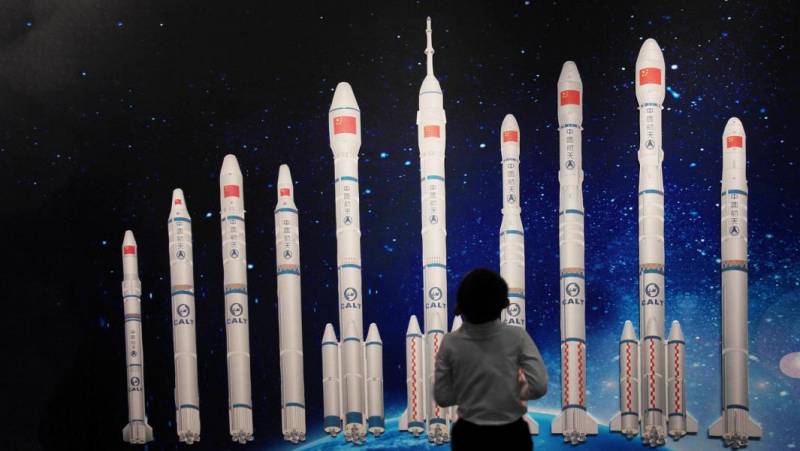 China is making great strides to not only stand on a par with the States, but also to outrun them in the future, becoming the leading space power on Earth. But so far, the Chinese space industry is in many ways inferior to both the United States and Russia. Obviously, for the PRC, the superheavy rocket "Changzheng-9" is a status project that is designed to reveal the potential of the Celestial Empire to the whole world. It is known about the promising "superheavy" is not so much. The carrier under development should put payloads weighing up to 130-133 tons into a low reference orbit.

Chinese engineers are considering two options for a rocket: with kerosene-oxygen accelerators of the first stage and with solid fuel boosters. Obviously, only one option is implemented. In any case, the load capacity of Changzheng-9 will be approximately five times greater than that of the predecessor Changzheng-5, which is now the heaviest China launch vehicle. According to experts, China needs superheavy launch vehicles for manned flights to the Moon and Mars. There is little doubt that this will be realized sooner or later: China has a huge human economic и technical potential, and also - iron political will. Perhaps, in the future, space will be "divided" between the United States and China. And we may see a new Cold War not on Earth, but in the orbit of other planets and satellites. The potential of other countries objectively so far does not allow their astronauts to go beyond the Earth's orbit. Perhaps something will change in the future. You just have to wait.
Ctrl Enter
Noticed oshЫbku Highlight text and press. Ctrl + Enter
We are
Again “Angara”: why is Russia another heavy missile?
Quiet Don: What is heard about the most powerful rocket in Russian history
Reporterin Yandex News
Read Reporterin Google News
Ad
The publication is looking for authors in the news and analytical departments. Requirements for applicants: literacy, responsibility, efficiency, inexhaustible creative energy, experience in copywriting or journalism, the ability to quickly analyze text and check facts, write concisely and interestingly on political and economic topics. The work is paid. Contact: [email protected]
3 comments
Information
Dear reader, to leave comments on the publication, you must sign in.