Russian airliners of the future: how to answer us in Europe and the USA

July 11 2019
3
The situation in the Russian aircraft industry is far from ideal, as almost everyone says, including officials. It should be noted that it is civil aviation that is the determining indicator, while combat aircraft, regardless of their potential, can only claim to be a relatively narrow niche market segment. 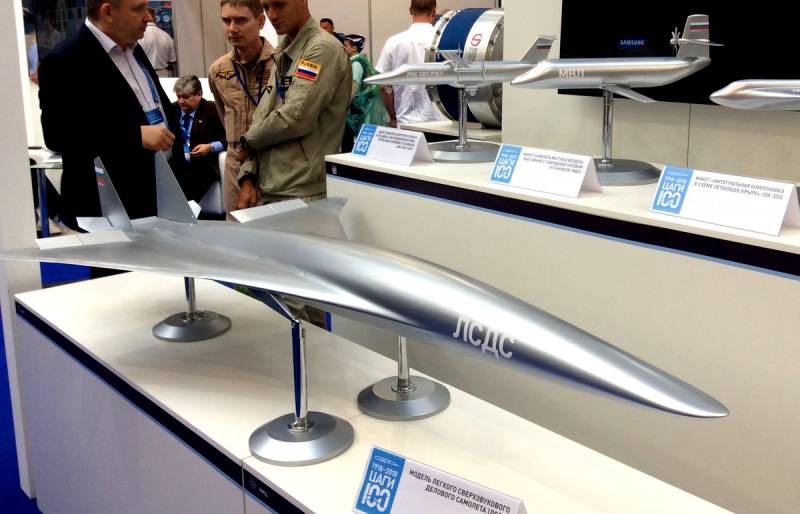 As you know, neither the Sukhoi Superjet 100, nor the promising MC-21 became a hit on the world market and are unlikely to ever become, being, in fact, a product focused specifically on domestic consumption. One can argue, they say, this is not so bad, because the domestic market is also wide. And remember about the Chinese airliner Comac C919: at the moment, recall, an order has already been received from Chinese companies for 800 aircraft. However, at the same time, it should be taken into account that one and a half billion people live in China and the Celestial market is many times larger than the Russian one. If the order for the C919 was limited to several hundred aircraft, then it would hardly have been worthwhile to start such an expensive project.

In fairness, not only Russia has problems. It is still unknown how the Boeing will survive the most serious difficulties and what it will result in. And the once successful Brazilian Embraer (which, in principle, is now very successful), which for decades has been the pride of a Latin American country, has de facto come under the control of the Americans. What is remarkable is the very Boeing. The American corporation said that after taking control of the unit of passenger jet aircraft of the Brazilian aircraft manufacturer Embraer, it will receive the name Boeing Brazil - Commercial. In truth, it causes only sadness.

What kind of aircraft can the market offer Russia in the future, and whether they can compete with Boeing and Airbus machines.

Perhaps this is one of the most interesting and, importantly, promising projects of the Russian aircraft industry. So far, existing only as a concept. Its developer is OJSC FPG Rosaviakonsorzium, and the proposed manufacturer is Tupolev. It should be a wide-body passenger aircraft for medium-haul airlines, which will accommodate about 300 people. The main feature of the project is an elliptical fuselage. This decision is designed to allow more passengers to be placed on board and to form a significant part of the lift due to the fuselage, which will make it possible to reduce the load on the wing and make the aircraft economical. 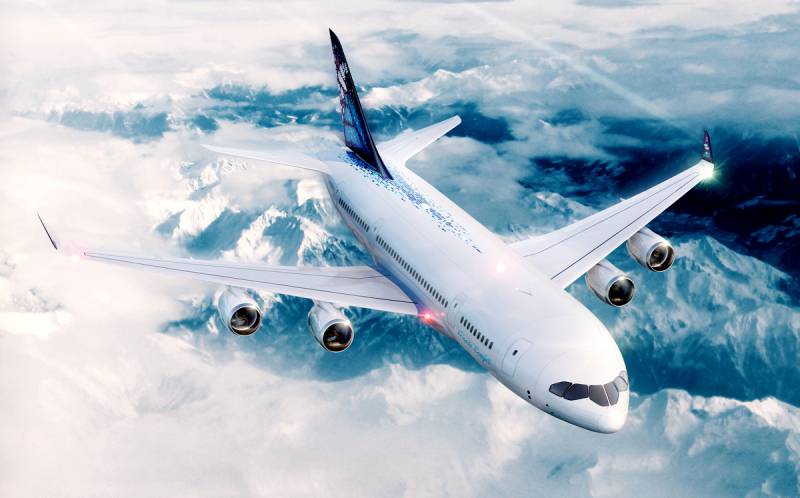 At the same time, at different times it was possible to meet different concepts of the power plant. Some images feature a four-engine aircraft with promising PD-14 from MS-21, however, modern realities are such that cars with four engines cannot be economical. The story of the abandoned Airbus A380 is the best example.

An alternative is two PD-18R, PS-90A20 or Western Rolls-Royce Trent-500 engines. It is important to note that back in 2017 it became known that Russian engineers completed the conceptual design of the Frigate Ecojet. “At present, the conceptual design has been completed: finite element models of a high degree of detail have been developed; compiled a weighted summary of the designs of the airframe; detailed design of the assembly unit assembly of the aircraft; Digital airplane mockup created. The program has come right up to the next stage: determining the technical person of the FreeJet aircraft, ”said project manager Alexander Klimov.

The Frigate Ecojet aircraft will have to replace the IL-96-400M, which is outdated even before the start of development, and the Russian-Chinese CR929, which is yet to be created. Talking about the timing in the case of FreeJet, of course, so far simply does not make sense. This is by default a very complex and expensive project.

In June of this year, it became known that the Zhukovsky Central Aerohydrodynamic Institute tested a model of a promising long-range civil airliner. In general, the project used models of different configurations. Tests at the moment have passed samples with two types of wings: one has a sweep of 30 ° and is designed for a cruising speed of 83-84% of the speed of sound, and the second with a greater sweep and speed of up to 85% of the sound. According to the head of the aerodynamics department of TsAGI aircraft and missiles Anatoly Bolsunovsky, such an aircraft will be able to accommodate up to 250 passengers and will be able to cover more than nine thousand kilometers without refueling. The difference from past airliners should be the best aerodynamics. 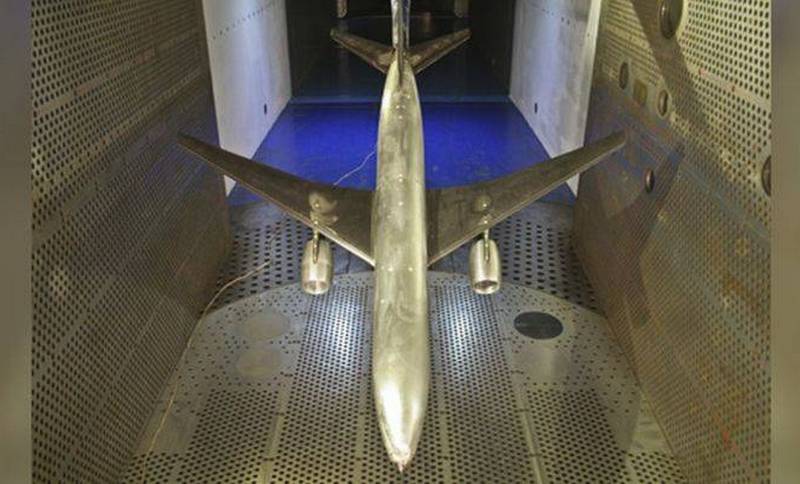 Experiments have shown that the use of the latest materials in the design, together with the use of promising engines, will reduce fuel consumption by up to 50% in comparison with analogues. At the same time, of course, the work of the Central Aerohydrodynamic Institute at the moment only determines the stage of development, and it can in no way be considered as a finished project.


The Tu-144 aircraft became the first supersonic airliner to fly in the history of mankind. And one of two in the world, along with the British-French Concord, a type of supersonic airliner in general. However, the intense sonic boom and problems of a purely technical plan forced them to abandon such machines. Now the United States, within the framework of the X-59 project, is working on a quiet supersonic airliner, and in addition, they are trying in every possible way to make flights at high speeds safe and affordable. 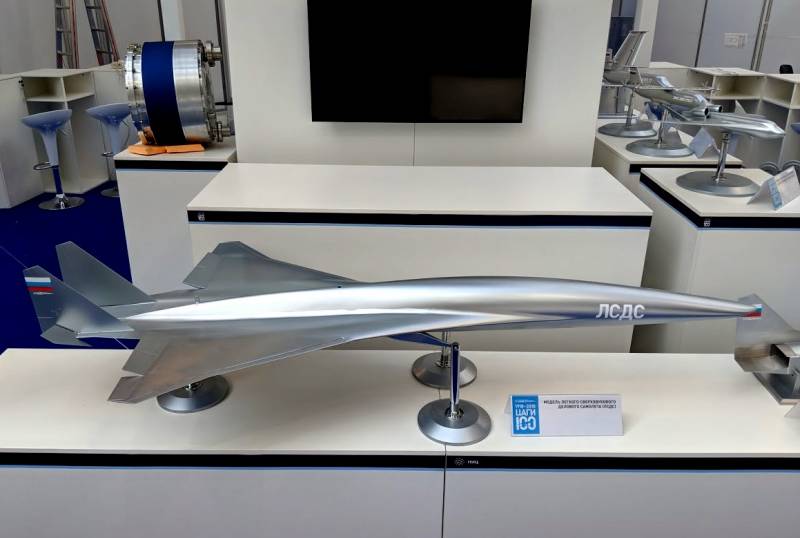 Similar work is being carried out in Russia, however, so far - with a clear lag behind the West. At the Gidroaviasalon-2018 International Exhibition, TsAGI presented a model of a light supersonic business aircraft, which theoretically could be a revival of the ideas embodied in the Tu-144. While we are talking about a light business plane. “Thanks to the special layout and the nozzle with a sound attenuation system, the aerodynamic characteristics of the aircraft are high in all flight modes,” the TsAGI press service said.

What is the outcome?

We did not begin to touch upon the initially utopian idea of ​​creating a passenger aircraft based on the Tu-160 strategic bomber, as it is obvious that a new base needs to be created for a civilian aircraft. Otherwise, it will at least be extremely uneconomical. Such questions do not confront military engineers, especially the designers of the Cold War period, when defense money was not particularly considered at all. As for the remaining ideas, they, at least, have the right to life. However, the author’s subjective (possibly utopian) view connects the future prospects of the Russian aircraft industry, primarily with non-state companies that have yet to declare themselves.

In general, the main emphasis in the case of promising machines is developers on safety and efficiency. Obviously, the requirements for them will only grow in the future.
Ctrl Enter
Noticed oshЫbku Highlight text and press. Ctrl + Enter
We are
Unsuccessful Tu-334: could Russia get an alternative to the Superjet?
The sky will be Chinese: big plans for the Comac C919
Reporterin Yandex News
Read Reporterin Google News
Ad
We are open to cooperation with authors in the news and analytical departments. A prerequisite is the ability to quickly analyze the text and check the facts, to write concisely and interestingly on political and economic topics. We offer flexible working hours and regular payments. Please send your responses with examples of work to [email protected]
3 comments
Information
Dear reader, to leave comments on the publication, you must sign in.