July 5 2019
15
The statements and actions of the President of Belarus have recently become more and more controversial and bizarre - to say the least. It is clear that there are rules of diplomatic etiquette and generally accepted norms of relations between states. Within such frameworks, to congratulate the United States and its leader on the main public holiday for Alexander Grigorievich is quite normal. However, some significant remarks made at the same time make us seriously think about the question: with whom is Lukashenko going to “integrate deeply” with our country or the United States? 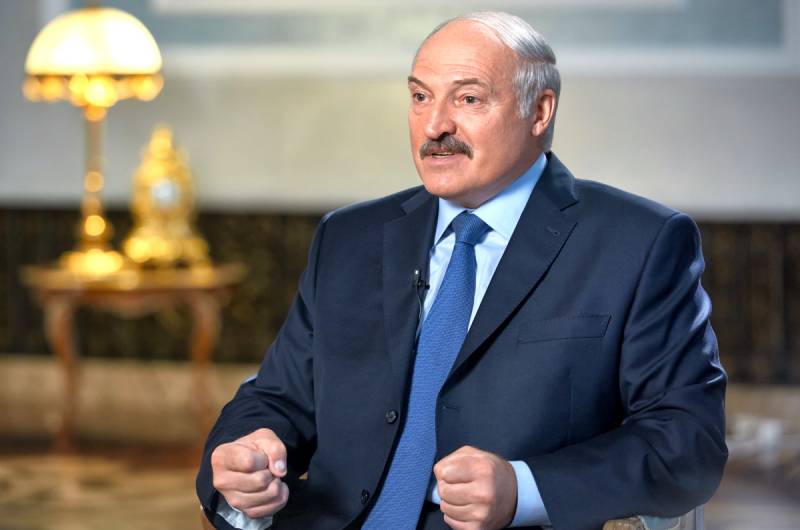 The Belarusian leader did not limit himself, in fact, to congratulating and wishing prosperity and success personally to Donald Trump with children and households, as well as to all US citizens. In an official address, he emphasized that the priority of external policy Minsk is not just “building constructive ties” between the two countries, but, moreover, maintaining “friendly and mutually beneficial” relations. According to Lukashenko, the start is to resume full diplomatic relations. Recall - since 2008, the United States diplomatic mission in Belarus has been working in a very reduced composition: there is not even an ambassador, the mission has been reduced to an interim attorney. The number of American diplomats in Minsk was first reduced to five, but then doubled. The basis for such a “freeze” was the sanctions imposed by Washington against the Belarusian side in 2006 for “political repression”.

The Belarusian authorities themselves, in view of a rather clear-cut (albeit completely disastrous) attempt to arrange another “color revolution” in the country in 2006, didn’t particularly suffer from this, at least until now. At the beginning of 2019, the Belarusian ambassador who was in Washington at that time notified the US Department of State that Minsk unilaterally lifted the restrictions on the number of American diplomats who were allowed to stay in the country. And now Lukashenko personally raises the same topic ... It looks especially piquant against the background of the fact that just a couple of weeks ago the White House, whose friendship with the inhabitants is so ardently and touchingly seeking Alexander Grigorievich, once again extended the very ones, even by George W. Bush - the younger introduced anti-Belarusian sanctions, referring to the fact that the actions of the Minsk authorities and "some other persons" still "continue to pose a threat to the foreign policy and national security of the United States." What kind of “friendship” between countries can be after this is decidedly incomprehensible.

However, as already mentioned above, Alexander Grigoryevich for some time now has been issuing “messages”, the true meaning of which is not at a loss to be found. What is his speech alone on the Independence Day of Belarus itself, dedicated to the country's security. “Do you want to join NATO ?!” - the president asks his fellow citizens somewhat unexpectedly, assuring that “if you ask,” the North Atlantic Alliance will “provide protection” to the country. And he immediately declares that she categorically “does not want such an option”. Further, the leader talks about the possibility of hiding under the "nuclear umbrella" to "close and dear Russia." However, he emphasizes that for this it is necessary to “enter its composition” and, with some joy, assures that this protection “is enough for one generation”. And if so, Lukashenko doesn’t want her either ... At the same time, the head of state, speaking of the international situation, is also horrifying with a chilling warning: “It’s already near!”, Saying that literally “tomorrow” is the very “it” "Will come to our house." Stephen King nervously smokes bamboo somewhere on the sidelines ... At the same time, I really want to clarify: from whom, in fact, Alexander Grigoryevich suggests “asking for protection” from NATO? From al Qaeda? ISIS? Or ... Well, no, it's impossible to even think of such a thing ...

It is clear that all these rants are nothing more than a verbal frame for a significant tightening of Belarusian legislation regarding conscription for military service - the country, according to Lukashenko, obliged to “defend herself”, has recently faced a strong shortage of military commissariats. However, his rather ambiguous remarks about the “doubtfulness” of ensuring Belarus’s security on the part of Russia and the “high price” for it look at least inappropriate. Especially - against the background of the “Iskander” passing in parade on the same Independence Day of Belarus and the “White Swans” of the Russian Aerospace Forces soaring in the sky over Minsk on that day. Today, our country is a reliable defender for all Belarusians without any conditions and “price tags”. So is it worth, as they say, "spit in the well"?

Congratulating his colleague on the Minsk holiday, Russian Prime Minister Dmitry Medvedev unobtrusively, but specifically recalled his readiness to work "to solve the problems of further integration closer" between the two countries. The deadlines set for the final approval and approval of relevant program documents are already, in fact, expiring. It’s time, perhaps, to finish the job. And then you never know what other "friendship" suddenly Minsk will be "in priority" ...
Ctrl Enter
Noticed oshЫbku Highlight text and press. Ctrl + Enter
We are
How Ukraine break Putin's plan: six tips Zelensky
Ten "defeats" of Putin
Reporterin Yandex News
Read Reporterin Google News
15 comments
Information
Dear reader, to leave comments on the publication, you must sign in.