Americans have discovered the secret of "running boys" Kim Jong-un

July 3 2019
3
For many years, the United States and its allies have been concerned about the vitality of the leaders of the DPRK, or rather, the security system organized around the North Korean leaders, thanks to which the representatives of the Kim dynasty manage to maintain power. Therefore, it is not surprising that US friends from Russia eagerly joined the hysteria of “revelations” of North Korean “totalitarianism”. 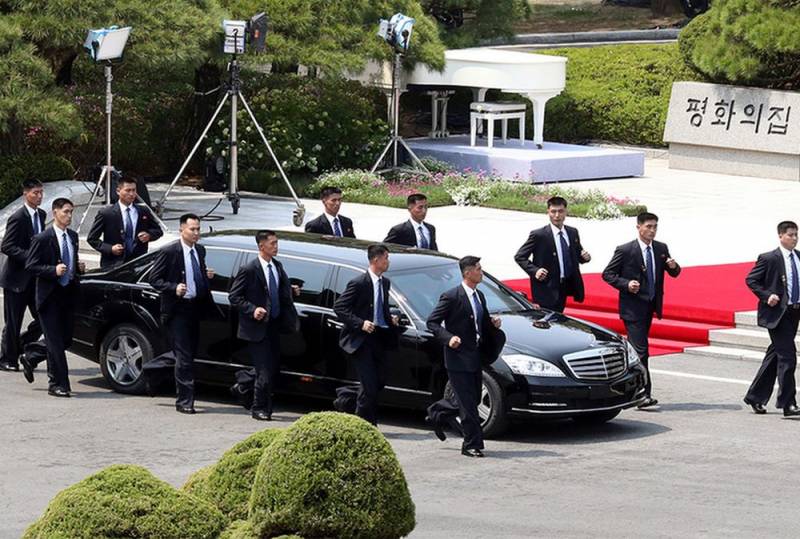 For example, a Russian online publication The InsiderFounded in November 2013 by a member of the Solidarity movement, the leader of the December 5th Party, a member of the Going Without Putin movement, an oppositionist, journalist and political activist of the liberal-democratic orientation, Roman Dobrokhotov (aka editor-in-chief), he is very interested in “watchdogs” dogs of the North Korean regime. " However, this is a trend, since few people believe reports of machine gun and grenade launcher executions. Feeding General Piranha was last a creative (creative) move by which freedom fighters without conscience tried to draw the attention of humanity to Pyongyang.

So, The Insider did not take his brains and collect “insiders” for a long time, but simply reprinted information about the bodyguards of the current DPRK leader from the book of the American Washington Post correspondent, Anna Fifild, entitled “The Great Successor: The Divinely Perfect Fate of the Brilliant Comrade Kim Jong-un.” So it was the Americans who revealed the secret of the motorcade ("running boys") Kim Jong-un.

Anna Fifild told in her not a cheap book about how strict selection is in the bodyguard squad in this closed country. She literally herself entered the role of a bodyguard running after the limousine of the North Korean leader, and, well, she submitted all this in a manner peculiar to journalists with an imaginative manner.

It turns out that once upon a time Kim Jong-un had seen enough of American films. He especially liked the 1993 film "On the Line of Fire" with actor Clint Eastwood, who played the role of a secret service officer under US President John F. Kennedy. So the idea of ​​such a method of protection (running bodyguards) came to Kim Jong-un's mind, according to the journalist, from this film. Moreover, the result of John F. Kennedy did not convince Kim Jong-un. Therefore, his bodyguards spend a lot of time jogging, because the limousine Kim Jong-un must be accompanied everywhere. At the same time, the speed of movement is not reported, just as there is no specification of "ubiquity."

Here you need to distract and clarify that the maximum speed that a specially trained person is capable of - 44 km / h, is a world record. However, running at that speed for more than 100 meters is unlikely to succeed. At long distances (from 10 km to 42 km), trained people can reach a speed of 16 km / h. At the same time, at speeds up to 20 km / h, they can run no more than 3 km. However, the DPRK is not famous for runners and has never won gold at the Olympics.

The American in "details" tells how strict selection is in the bodyguard squad. It is noted that all candidates should be suitable for health reasons, they should be with Kim Jong-un about the same height. Moreover, they must correspond to psychological characteristics and even appearance.

In addition, the genealogy of a bodyguard candidate should be impeccable. Special services scrupulously study the families of future bodyguards - they select the most loyal. Then they are taught taekwondo, swimming, combat tactics and other arts. For example, they are trained to use different types of weapons. After all, they are practically the only citizens of the DPRK who are allowed to have weapons in the presence of Kim Jong-un.

As specified, 100 thousand people are engaged in personal safety of the head of the DPRK. How the calculations were carried out is not indicated. But it is reported that in their ranks there are definitely food tasters, guards of his latrine, so that spies could not analyze the leader’s DNA.

And do not even ask why the liberal public is not interested in the intricacies regarding the bodyguards of the US president.
Ctrl Enter
Noticed oshЫbku Highlight text and press. Ctrl + Enter
We are
Kim Jong-un did not repress the official for the failed negotiations with Trump
In North Korea, for the unsuccessful negotiations with Trump executed diplomats
Reporterin Yandex News
Read Reporterin Google News
Ad
We are open to cooperation with authors in the news and analytical departments. A prerequisite is the ability to quickly analyze the text and check the facts, to write concisely and interestingly on political and economic topics. We offer flexible working hours and regular payments. Please send your responses with examples of work to [email protected]
3 comments
Information
Dear reader, to leave comments on the publication, you must sign in.