July 3 2019
1
The Ukrainian diaspora of Canada, most of which come from Western Ukraine, is not only aggressive towards the residents of the DPR / LPR, but also capable of pushing certain decisions at the state level. 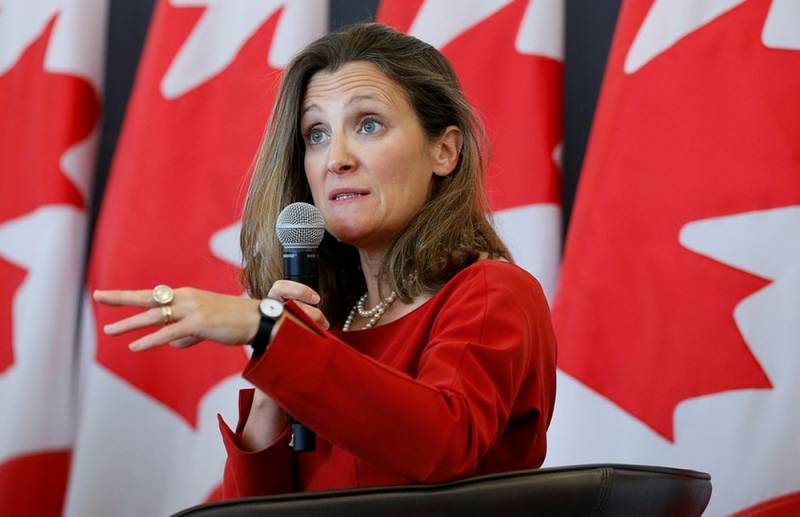 Minister of Foreign Affairs of Canada Hristia Freeland during a press conference announced that residents of the Donetsk and Lugansk People's Republics, who received Russian passports, will be denied entry to the country of maple leaf. It is reported RIA News".

According to Frieland, Canada has the ability to distinguish Russian passports issued in the republics from passports in other regions of Russia.

The head of the Canadian Foreign Ministry noted that entry into the country to residents of Donetsk and Lugansk will be closed only with Russian passports, the regime for passing residents of the republics with Ukrainian passports will remain the same. The Canadian diplomat called on other countries to do the same.

At the same time, the Canadian authorities do not hide their desire to sell weapons to Kiev, knowing full well that the Ukrainian army will use it in the Donbas against those civilians whom Hristia Freeland is going to refuse entry.

The head of the Canadian government, Justin Trudeau, after negotiations with the President of Ukraine Vladimir Zelensky said that Canada includes Ukraine in the list of countries that are allowed to sell weapons.
Ctrl Enter
Noticed oshЫbku Highlight text and press. Ctrl + Enter
We are
Unprecedented excitement: Pushilin spoke about the DNR passports
Zelensky announced a return move to the distribution of Russian passports in the Donbass
Reporterin Yandex News
Read Reporterin Google News
Ad
The publication is looking for authors in the news and analytical departments. Requirements for applicants: literacy, responsibility, efficiency, inexhaustible creative energy, experience in copywriting or journalism, the ability to quickly analyze text and check facts, write concisely and interestingly on political and economic topics. The work is paid. Contact: [email protected]
1 comment
Information
Dear reader, to leave comments on the publication, you must to register.
I have an account? Sign in