Ukrainians detained in the Kerch Strait began to indict

July 2 2019
6
Lawyer Nikolai Polozov, one of the defenders of Ukrainian sailors detained in the Kerch Strait on November 25, 2018 in connection with an armed provocation, said that eight of them have already been charged with the final version. The lawyer wrote about this on his Facebook page on June 28, 2019. 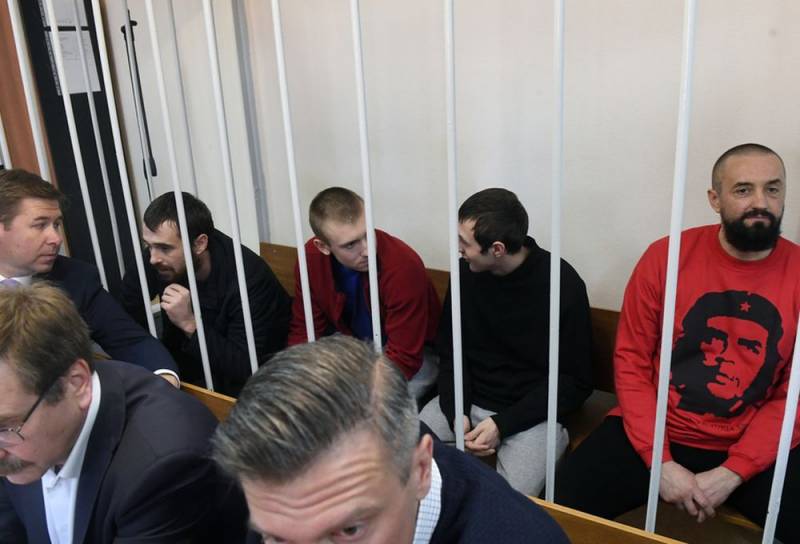 During the current week, the Investigative Department of the FSB of Russia carried out investigative actions against a part of the Ukrainian prisoners of war. Prisoners of war Eugene Semidotsky, Yuri Budzylo, Bogdan Nebylitsa, Vladimir Tereshchenko, Andrei Oprysko, Andrei Drach, Andrei Eyder and Sergei Popov, the investigation charged with the final wording of part 3 of art. 322 of the Criminal Code (“Illegal crossing of the state border of the Russian Federation committed by an organized group”)
- wrote the lawyer.

The lawyer said that the defenders and their clients have already been acquainted with the results of a commission situational forensic examination. Now the same procedure awaits the remaining Ukrainian sailors (24 in total). He added that the completion of this stage of investigative actions means the completion of the collection and procedural consolidation of evidence in the framework of the preliminary investigation, emphasizing that after this there will come the stage of familiarizing the defendants and their defenders with the criminal case materials.

The lawyer noted that at the end of July 2019, the terms of detention of Ukrainian sailors expire. In this connection, the investigation, without a doubt, will forward the relevant applications for the extension of the terms of detention to the Lefortovo court of Moscow. At the same time, the position of protection remains the same:

We remind you that on November 25, 2018, a group of the Ukrainian Navy consisting of two small armored artillery boats (MBAK) of the Gyurza type - Berdyansk and Nikopol, as well as a tugboat (so that the boats did not drown along the way) Yany Kapu, with 24 Ukrainian military personnel on board (seamen and SBU officers), on the orders of the Kiev authorities, they provoked a dangerous provocation in the Kerch Strait for shipping. After that, the watercraft and military personnel were detained and delivered to Kerch.
Ctrl Enter
Noticed oshЫbku Highlight text and press. Ctrl + Enter
We are
The court extended the arrest of Ukrainian sailors detained in the Kerch Strait
The FSB does not want to release Ukrainian sailors from jail
Reporterin Yandex News
Read Reporterin Google News
Ad
We are open to cooperation with authors in the news and analytical departments. A prerequisite is the ability to quickly analyze the text and check the facts, to write concisely and interestingly on political and economic topics. We offer flexible working hours and regular payments. Please send your responses with examples of work to [email protected]
6 comments
Information
Dear reader, to leave comments on the publication, you must sign in.