Russian nuclear engine will not leave a chance for Ilona Mask

April 18 2018
7
On April 17, Russian Deputy Prime Minister Dmitry Rogozin, who oversees the defense complex, nuclear, rocket and space industry, and other high-tech industries producing dual-use products, said that Russia plans to use some technical solutions of the founder of SpaceX, Ilon Mask. 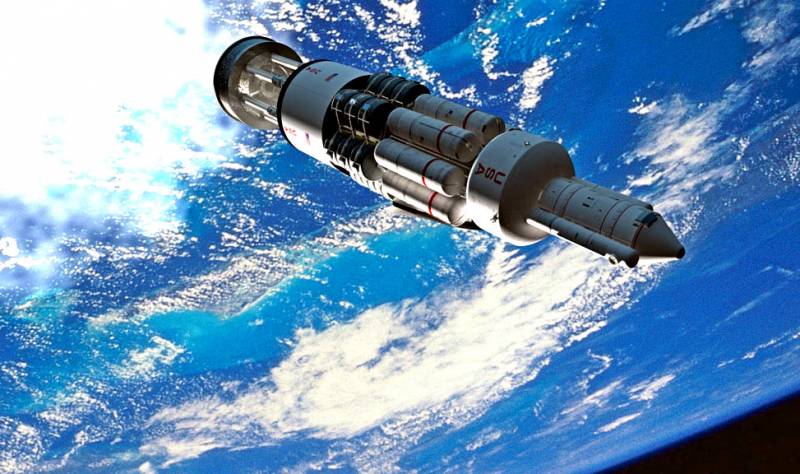 For example, I’ve carefully analyzed some of his [Ilona Mask] technical solutions with our specialists and I can say that we are ashamed, but we will use something ”
- Rogozin said in an interview with RBC.

On the same day, there were reports that the S7 group of companies closed the acquisition of the Sea Launch project property complex and the transfer of the floating spaceport previously controlled by Sea Launch affiliated with RSC Energia to the S7 subsidiary S7 Space. The CEO of S7 Space Sergey Sopov announced his company’s readiness to compete with SpaceX: “We will compete for the price, quality of our services, usability and comfort of working with the customer.”

Meanwhile, one should not consider the purchase of Sea Launch and plans voiced by Dmitry Rogozin to use a number of technical solutions by Ilon Mask only in the light of the commercialization of the space industry and the private competition between S7 Space and SpaceX.

In fact, Russia with these steps continues the systematic deployment of elements of its “big” space program, transferring these elements from the design stage to various stages of implementation.

"Reporter" has already reported (material “Russia needs to get to the moon”) on the actual revival of the "moon race" with the participation of the United States, China and Russia. As you know, on April 12, 2018, on the next Cosmonautics Day, Russian President Vladimir Putin confirmed Russia's plans for the moon and a manned flight to the Earth’s satellite, saying in an interview with astronauts that it is planned to first create a station in lunar orbit, and then deploy the modules to the moon itself.

Earlier, in March 2018, the following words of the President of Russia were heard in Andrei Kondrashov’s film “Putin”:

We will now be there [in space] to carry out unmanned, and then manned launches - to explore deep space, and the lunar program, then the exploration of Mars.

At the same time, the main decisions on the contours of the promising Russian space program were made much earlier. Recall that on April 11, 2014 Dmitry Rogozin published an article in the Rossiyskaya Gazeta, where he formulated three strategic objectives of Russia in space:


Note that the tasks indicated by Rogozin clearly correlate with the 30-year space exploration plan presented by the Khrunichev State Scientific and Practical Center at the traditional January Korolev readings in 2011. According to the GKNPC plan, the conquest of other planets should begin with the creation of an assembly platform in low Earth orbit. At a space shipyard, interplanetary spacecraft will be built from separate modules, and then it will be the turn to create the Lunar Orbital Station (LOS).

After exploring the moon’s surface of VOCs and creating channels for controlling lunar automata, human-visited bases will be created at the most interesting points on the moon for science, and then a gradual industrial colonization of the Earth’s satellite will begin. The composition of lunar regolith includes, in particular, such chemical elements as oxygen (40%), silicon (20%), iron (5-10%), aluminum (10%), calcium (10%), (3%) and magnesium (5%), there is evidence to suggest the presence of hydrogen in the regolith, so for lunar bases in the future there is nothing impossible in switching to self-sufficiency.

The conquest of Mars, according to the plan of the Khrunichev GSCC, should occur in the same logic - first the creation of an orbital station, then the visited base on the surface of the Red Planet, then the transition to the colonization of Mars.

In the framework of the Korolev readings of 2011, the Khrunichev GSCC proposed for use in interplanetary spacecraft the so-called dual-mode nuclear rocket engine (NRE), capable of operating both in the NRE mode and in the mode of energy source for electric rocket engines. Note that a dual-mode NRE is one of the preferred options considered in the design of the Russian Martian mission, sequentially, although with some interruptions, developed since 1960.

At the same time, since 2009, as part of the production cooperation between Roskosmos and Rosatom, the development of a megawatt-class nuclear propulsion system (YEDU, is used only to generate energy for electric rocket engines), which was also proposed and ultimately selected for the Russian manned project flight to Mars. According to the initial plans, the completion of the development of nuclear power plants was scheduled for 2018, flight tests of the installation in the 2020s.

At the same time, dual-circuit NRE and YaEDU are not direct competitors. Russian designers believe that if for the lunar and Martian missions there is enough nuclear power, then for flights to the distant planets of the solar system at the present time there is simply no alternative to the dual-circuit NRE.

We also note that in all versions of the Russian Martian mission, it was planned to assemble the interplanetary ship in low Earth orbit, and its assembly for several reasons should not exceed two years.

Meanwhile, it is the space assembly shipyard, on the basis of the International Space Station (ISS), starting from the period 2022-2024, plans to create S7 Space. The CEO of this company, Sergei Sopov, said:

Our plans are to make the orbital spaceport a key element of the promising space transport system “near space - deep space”. The ISS will become a kind of transshipment base, spaceport, transport hub, if you like, between the Earth and deep space, significantly reducing the total cost of organizing such flights.

The head of S7 Space also said that the main structural element of such a spaceport should be reusable interorbital tugs being developed in Russia with a megawatt-class nuclear power plant (YEDU), which will allow Russia to occupy the niche of cargo transportation in deep space.

Despite the fact that effective PR in the spirit of the same Ilon Mask and his SpaceX cannot be attributed to the strengths of Russian space programs, and despite a considerable number of operational problems of Roskosmos and the domestic space industry, one cannot but recognize a calm, well-developed and systemic nature. ongoing space plans of Russia, which to a large extent guarantees their successful implementation.

Perhaps the United States, Elon Musk and SpaceX will achieve their sometimes very extravagant plans for the moon and Mars, perhaps they will do it a little earlier than Russia, but the Russian Federation will be able to realize its viable space alternative in a comparable time frame and, at least, with a comparable effect. And if we talk about deep space, then here the Americans risk being left far behind.
Ctrl Enter
Noticed oshЫbku Highlight text and press. Ctrl + Enter
We are
Russia will give “Ukrainian space” a little more
Will the Sea Launch Save the Russian Space Industry
Reporterin Yandex News
Read Reporterin Google News
7 comments
Information
Dear reader, to leave comments on the publication, you must sign in.