In Buryatia, made a hard landing passenger An-24, there are victims

27 2019 June
7
The tragedy ended with the flight of the AN-24 aircraft of the Angara airline on the route Nizhneangarsk - Ulan-Ude. 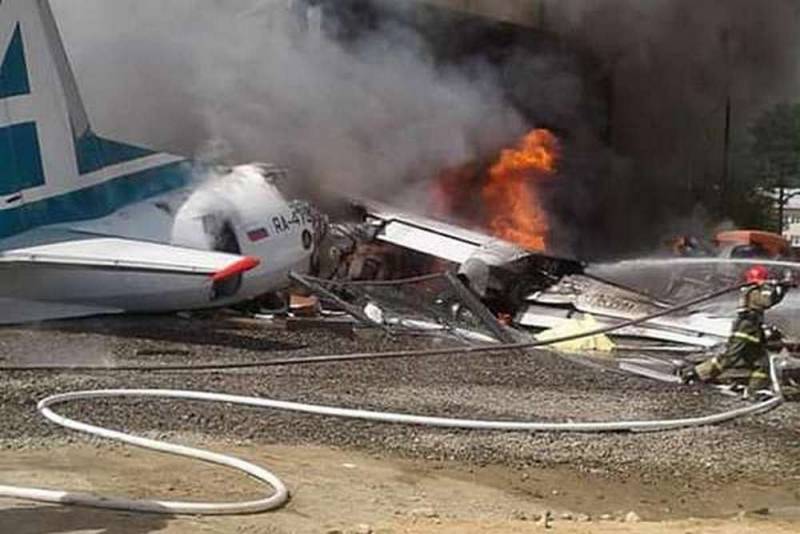 According to the press secretary of the Government of Buryatia, Aleksey Fishev, one of the engines failed at AN-24 immediately after takeoff from the Nizhneangarsk airport of the Severobaikalsky district and the pilots decided to return to the airport.

During landing, for an unknown reason, the airliner rolled out of the runway to a distance of about 100 meters and crashed into technical construction, which led to a fire on board.


As a result, two pilots died, out of 43 passengers 19 were taken to the hospital in Nizhneangarsk with injuries of varying severity. Currently, rescuers and firefighters work at the scene of the tragedy.

One of the passengers of the flight took off landing from the cabin:


The circumstances of this tragedy are somewhat similar to the SSJ-100 crash at the Moscow Sheremetyevo airport, which occurred in May: problems during take-off and unsuccessful emergency landing.

Upon the incident, the East-Siberian SU CC in transport initiated a criminal case on violation of flight safety rules, which resulted in the death of people through negligence.

Accordingly, the Interstate Aviation Committee (IAC) and the territorial administration of the Federal Air Transport Agency will conduct their investigation into the causes of the tragedy.
Ctrl Enter
Noticed oshЫbku Highlight text and press. Ctrl + Enter
We are
IAC constantly painted the SSJ-100 catastrophe and the crew’s actions
The crash of the SSJ-100 in Sheremetyevo killed 41 people
Reporterin Yandex News
Read Reporterin Google News
Ad
The publication is looking for authors in the news and analytical departments. Requirements for applicants: literacy, responsibility, efficiency, inexhaustible creative energy, experience in copywriting or journalism, the ability to quickly analyze text and check facts, write concisely and interestingly on political and economic topics. The work is paid. Contact: [email protected]
7 comments
Information
Dear reader, to leave comments on the publication, you must to register.
I have an account? Sign in