Kiev authorities will have to answer for the destroyed Malaysian "Boeing" 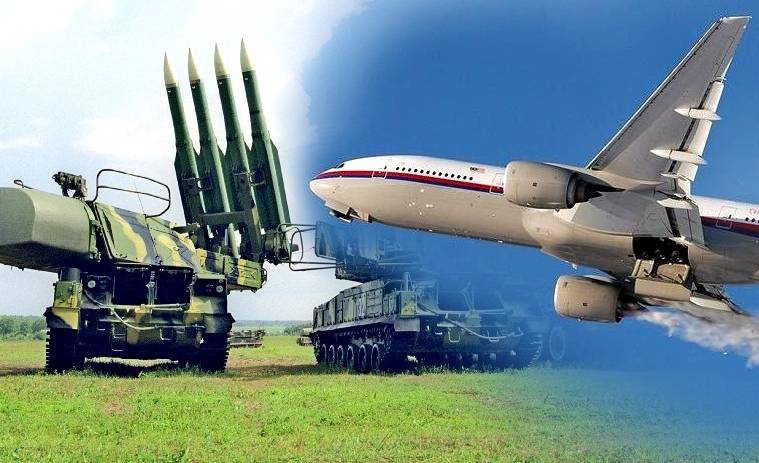 In the West, Russia is accused of this crime. They claim that it was the Russian military who shot at the plane with civilians on board. But for some reason, a detailed report of the Ministry of Defense of the Russian Federation with irrefutable evidence of Russia's innocence, announced at a briefing in 2018, remained almost unnoticed. He pointed to the true culprits of the tragedy and put an end to the case of the Malaysian Boeing.

Why were these data not taken into account by the international commission of inquiry? Russia could not clearly convey this information? Or, in the West, they simply did not want to take into account any arguments confirming Russia's non-involvement in this atrocity and bring real criminals to court?

Let us examine in more detail the evidence presented by the Ministry of Defense of the Russian Federation.

What the rocket debris said

At the scene of the tragedy, which occurred near the city of Snezhnoye, Donetsk region, there were numerous debris. With the assistance of fighters of the DPR militia, they were all collected and provided to the international commission of inquiry. As it turned out later, among the remains of the aircraft were found details of the rocket that shot down the liner.

Usually, while there is any consequence, it is not accepted to announce intermediate results. But because of the wide resonance that the Malaysian Boeing’s case received, the investigators decided to make an exception to the rule. Approximately every six months they give presentations where they tell us that they managed to find out about the details of the disaster and its likely culprits.

In May last year, the Joint Investigative Group (SSG), showed the public the remnants of a rocket that shot down an airplane, on which the serial numbers of its elements were preserved. By the way, there are no representatives of Russia in this international group, but Ukrainian experts are present.

The presentation showed fragments of the engine and nozzle of the 9M38 rocket, which is used in the Buk air defense system. According to investigators, this ammunition belonged to the 53rd anti-aircraft missile brigade, which is deployed in the Kursk region. The preserved engine and nozzle serial numbers were also demonstrated. Investigators asked those who can help identify the origin of the rocket to respond.

In September 2018, the Ministry of Defense of the Russian Federation answered the call of the international investigation team.

How the killer rocket was born

On September 17, 2018, the Russian military held a briefing, where they not only refuted the version of the guilt of our country in the crash of a passenger plane and the death of 298 people, but also presented irrefutable evidence of Ukraine’s guilt.


The report was based on rocket specifications provided by the Joint Investigation Team. The Russians managed to find out the exact origin of the rocket and track its “military path”. All these data were determined by the serial numbers of its parts, which are as unique as human fingerprints.

So, the manufacturer assigned a unique serial number 8869032 to the rocket engine, and 830113 to the nozzle block. The first digit of the engine number indicates the code of the enterprise where the rocket was manufactured, and the second and third - the year of manufacture. Thus, it was possible to establish that the missile for the Buk air defense system, which shot down a Boeing in the sky of Donbass, was made in the city of Dolgoprudniy, Moscow Region, in 1986. 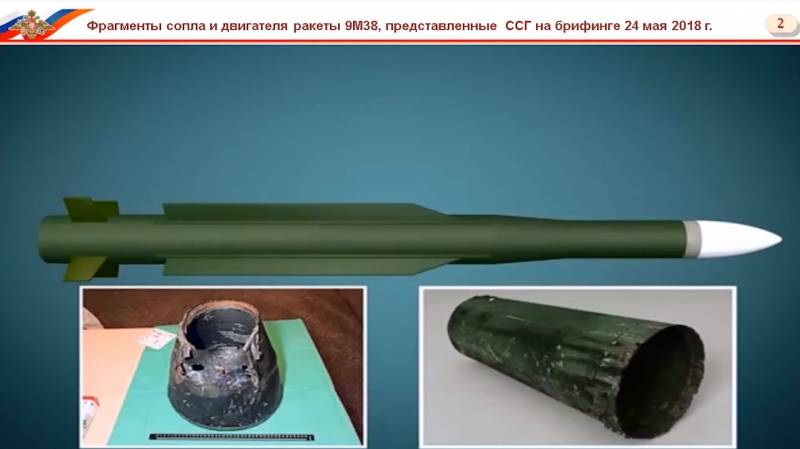 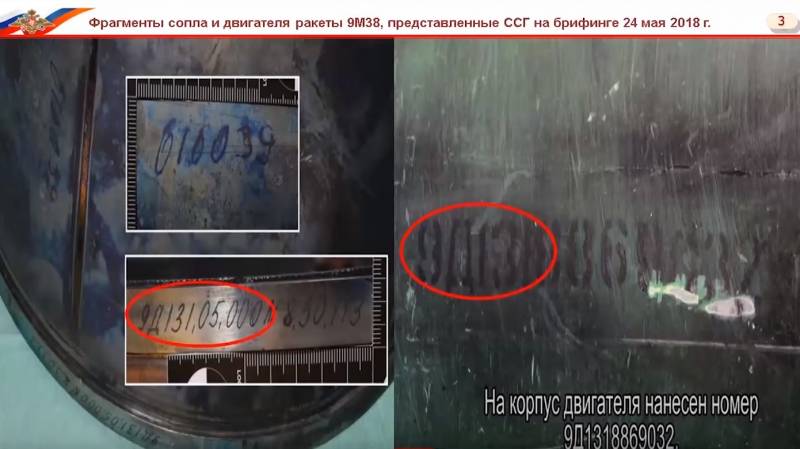 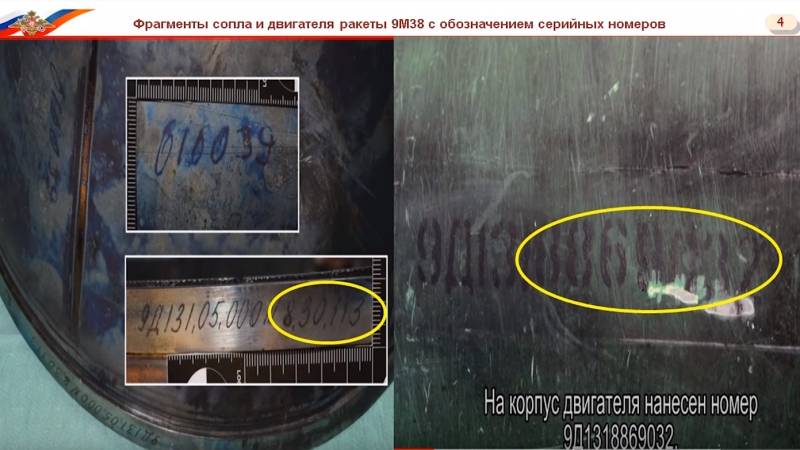 Experts have raised the archives of the Dolgoprudnensky Research and Production Association, where it is stored technical documentation on all products released by the enterprise, including the rocket engine and nozzle block presented by the investigation team.

According to the nozzle block passport and the rocket engine form, both elements were mounted and installed on the 9M38 rocket on December 24, 1986. The resulting product, which is the ammunition for the Buk anti-aircraft missile system, was assigned serial number 8868720. 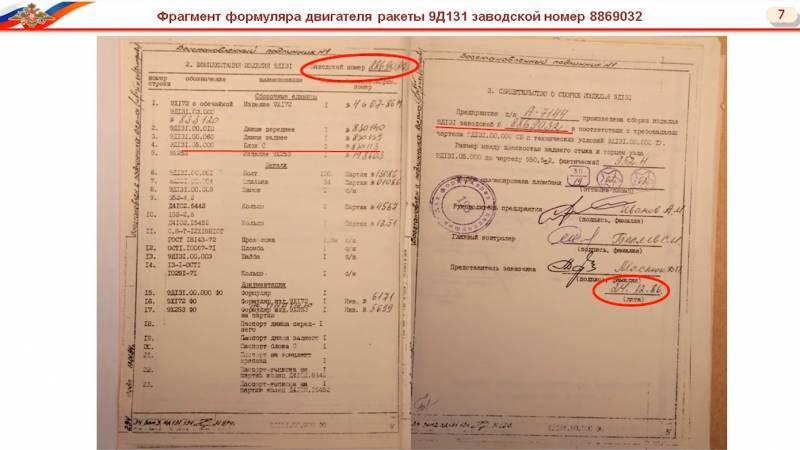 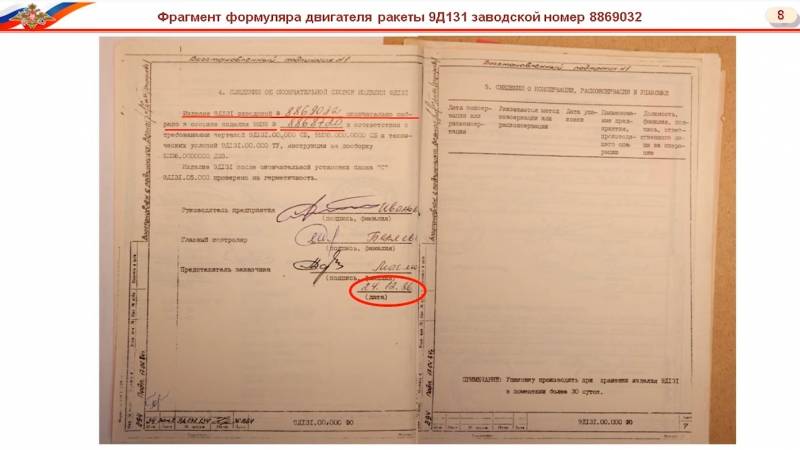 The complete assembly list, found in the enterprise’s archive, also says that engine No. 886032 is part of rocket No. 8868720. The path of the 9M38 missile from the Buk air defense system has been tracked. 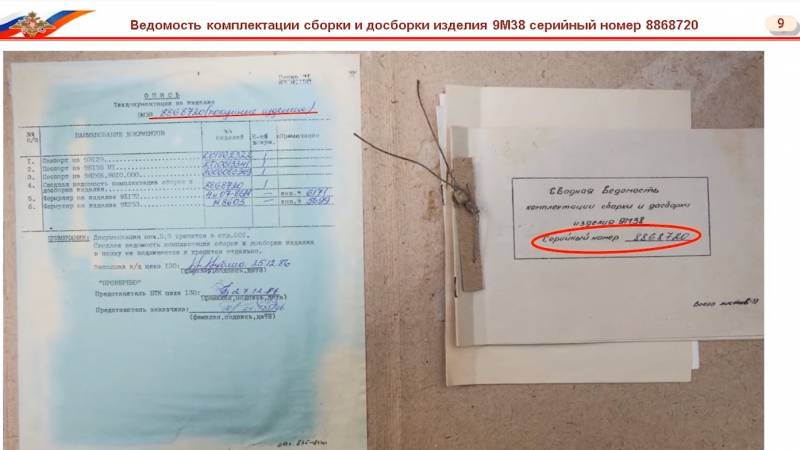 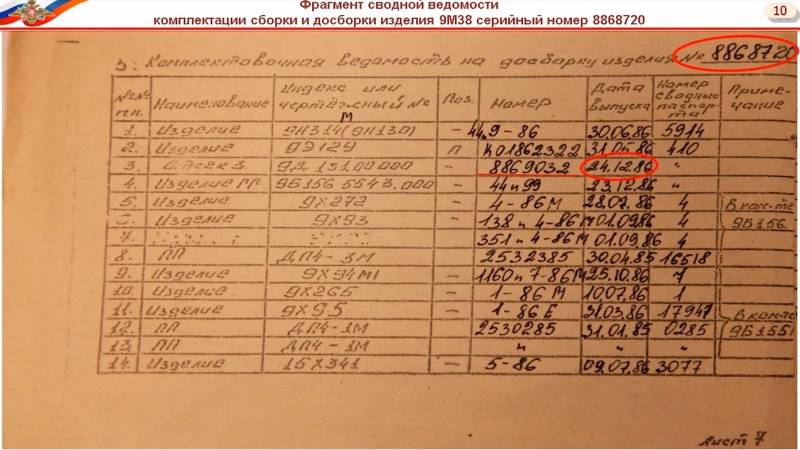 The fact that the rocket was manufactured in 1986 in Dolgoprudny does not help to find out the names of the criminals who killed almost 300 people with it. But the fact is that the manufacturer’s documentation not only provides information on the manufacture of ammunition, but also helps to track its future fate. Perhaps the persons who unveiled the serial numbers of the rocket elements did not think about this.

In the product logs, the receiver of the ammunition and the date of shipment are indicated. Military acceptance carries out quality control, after which the missile is assigned a tail number. Having received it, the military unit notifies the manufacturer’s military representative about the receipt of the product, about which a corresponding mark is put in the product registration book stored at the enterprise.

She was sent to military unit No. 20152, which received and delivered ammunition on arrival, which was notified by the manufacturer in Dolgoprudny.

A series of ammunition from the Moscow Region, which included our Buk missile, was sent to the 223rd Anti-Aircraft Missile Brigade of the Carpathian Military District. She was then based in the city of Terebovlya, Ternopil region of the Ukrainian SSR. After the collapse of the USSR, part of Ukraine was not withdrawn, but became part of the Armed Forces. Since 2000, the unit has become the Terebovlyansky anti-aircraft missile regiment. Now the location of the unit is the city of Stryi, Lviv region. 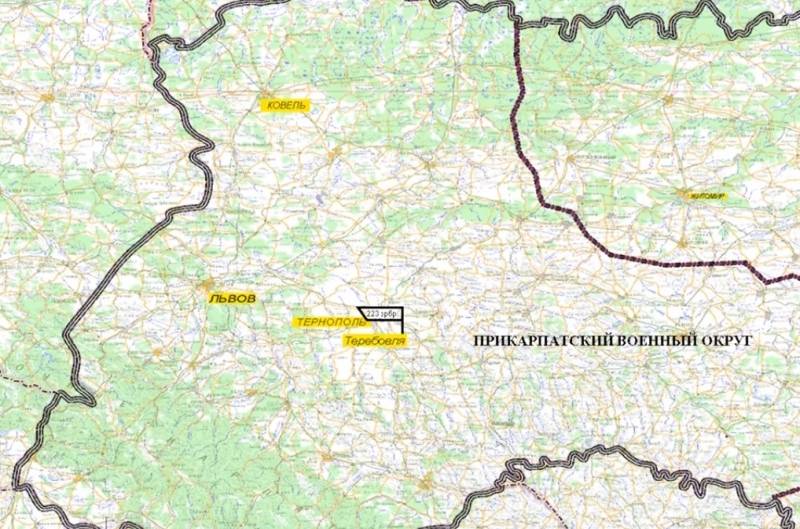 Since the moment the ammunition arrived in Ukraine, there was no information about its return to the territory of Russia.

It is noteworthy that since 2014, several units of the 223rd zrd were located in the Donbass in the so-called “ATO zone”.

Thus, this munition during the incident was in service with the military unit of the Armed Forces of Ukraine, which takes part in hostilities.

The culprits of the death of Boeing are in Ukraine

In 2016, the Russian Aerospace Forces made a radio interception of negotiations between Ukrainian military personnel, which contains an indirect recognition of the APU in the destruction of a passenger aircraft.


This conversation could be ignored, taking it for the usual "talk", but the ranks and positions of its participants give reason to take it more seriously.

Colonel Ruslan Grinchak turned out to be one of the persons involved in the conversation who mentioned the possibility of shooting down “another Malaysian Boeing”. In 2014, he led the 164th Air Defense Brigade, and now holds an even higher position. His unit during the crash of the Boeing controlled airspace over the disaster area.

Thus, this person possessed comprehensive information about the air situation, as well as about all the actions of the air defense units of the Armed Forces in this region. If he said the words “another Malaysian Boeing,” then he knew exactly who shot down the plane in 2014.

This is also evidenced by the fact that Ukraine did not provide investigators with recordings of negotiations of military dispatchers and the layout of all its Buk air defense systems in the area on the day of the disaster.

In addition, immediately after the crash of the Boeing, the Americans reported that they had satellite images of the area taken at the time of the attack on the passenger plane. Then, for some reason, they refused to provide personnel who could clarify the situation. Perhaps they covered their Kiev partners.

And the silence of Ukraine in response to the report of the Ministry of Defense of the Russian Federation can also indicate its involvement in the crime. After all, if the APU were innocent of this atrocity, they would have demonstrated either the missile itself or documented information about its use.

Logically, the data of the RF Ministry of Defense were to remove all charges from Russia and blame the Ukrainian military.

Do not also forget about the irrefutable argument, testifying to the guilt of the Kiev authorities in the deaths of 298 people. I mean the fact that in 2014 Ukraine did not close the airspace over the war zone. Moreover, military aviation took part in them at that time. For example, when a short-term conflict recently broke out between India and Pakistan, these countries banned civilian flights over the scene of battle a few minutes after the first shot.

Perhaps the Kiev regime decided to ensure the safety of its military aircraft bombing the peaceful cities of Donbass, hiding behind civilian airliners.
Ctrl Enter
Noticed oshЫbku Highlight text and press. Ctrl + Enter
We are
Russia "hit" the Ukrainian "Buk"
“They should have shot down the Russian airliner, but they were mistaken”
Reporterin Yandex News
Read Reporterin Google News
Ad
We are open to cooperation with authors in the news and analytical departments. A prerequisite is the ability to quickly analyze the text and check the facts, to write concisely and interestingly on political and economic topics. We offer flexible working hours and regular payments. Please send your responses with examples of work to [email protected]
30 comments
Information
Dear reader, to leave comments on the publication, you must sign in.