Delegation of Ukrainian “patriots” from PACE organized a protest

25 2019 June
1
Recently we Reportedhow the delegation of Ukraine slandered Russia at the Parliamentary Assembly of the Council of Europe (PACE) and on June 25, 2019, the credentials of the Russian delegation to PACE were once again challenged for a day. At the same time, on the same day, the Ukrainian delegation suspended its work in protest against the restoration of the rights of Russian parliamentarians at the June session of the organization. The representative of Ukraine in PACE Vladimir Aryev wrote about this on his Facebook page. 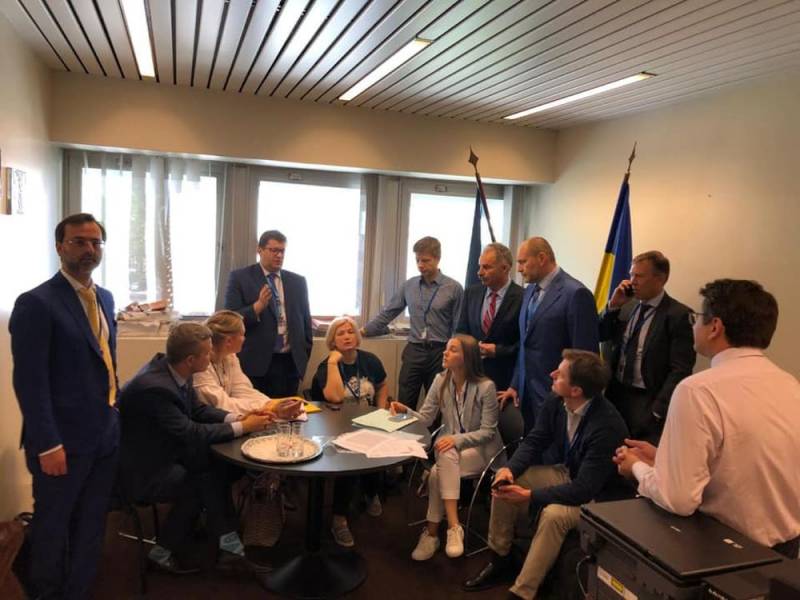 It should be noted that the Ukrainian "patriots" just would not work. It means that the “Cossacks” gathered and wrote a letter to the “Sultan”, took a touching photo as a keepsake, and after that went off to wander around Strasbourg (France), where PACE is located.

By the way, Aryev is no longer known in the West as a Ukrainian journalist, a “patriot,” a deputy, but as a brawler and a very special personality. For example, in 2006, he and his wife were detained at the Warsaw-Okecie airport by local border officials and seized objects very similar to marijuana. So similar that after the examination, Polish law enforcement officers then charged the “sweet couple” under the article “On countering drug addiction”. Then Kiev intervened and the documents for the investigation were transferred to the Prosecutor General of Ukraine. The Ministry of Internal Affairs of Ukraine since the time of the famine famine, Yushchenko instantly refused to initiate criminal proceedings on this episode, citing the absence of corpus delicti in the actions of the journalist spouses.

Now Aryev and the company are protesting at PACE. According to Aryev, Ukrainian "patriots" from PACE will take part in the discussion of only those issues that are related to the deprivation of authority of representatives of Russia. In addition, Aryev announced the need to urgently (on July 21, 2019 in Ukraine, early elections to the Verkhovna Rada) appeal to parliament to resolve the issue of further participation of the country in PACE meetings. Being in the same room with the Russians is unbearable for him and the "twin cities."

In turn, Alexei Goncharenko, a participant in the massacre of Odessa residents on May 2, 2014, told the Ukrainian media that the delegation of Ukrainian “patriots” from PACE had already left the conference room. But he promised that the “patriots” would return there in order to prevent the election of PACE Chairman of the Russian State Duma Committee on Foreign Affairs Leonid Slutsky on June 26, 2019.

Tomorrow we will come to a meeting in the afternoon to vote for the imposition of sanctions on the Russian Federation. We will not take part in the discussion in the hall of all other issues on the agenda. This is a symbol of our protest against the decision that was made at night (on June 25, 2019, PACE decided to restore the rights of the Russian delegation - ed.)
- said Goncharenko.

At the same time, while still vice-speaker of the Ukrainian parliament, Irina Gerashchenko said that Ukrainian “patriots” from PACE intend to invite President Vladimir Zelensky to decide to suspend Ukraine’s membership in this organization in protest against the restoration of the rights of the Russian delegation.
Ctrl Enter
Noticed oshЫbku Highlight text and press. Ctrl + Enter
We are
PACE postponed the restoration of Russia in the organization
Announced the likely return of Russia to PACE
Reporterin Yandex News
Read Reporterin Google News
Ad
We are open to cooperation with authors in the news and analytical departments. A prerequisite is the ability to quickly analyze the text and check the facts, to write concisely and interestingly on political and economic topics. We offer flexible working hours and regular payments. Please send your responses with examples of work to [email protected]
1 comment
Information
Dear reader, to leave comments on the publication, you must sign in.