18 2019 June
3
From June 17 to June 23, 2019, the International Paris Air Show at Le Bourget is held in France. This is the largest and oldest such event in the world. It takes place every two years on odd years at the airport of Le Bourget, 12 kilometers from Paris. And the first four days the salon works exclusively for specialists, then everyone can visit it. 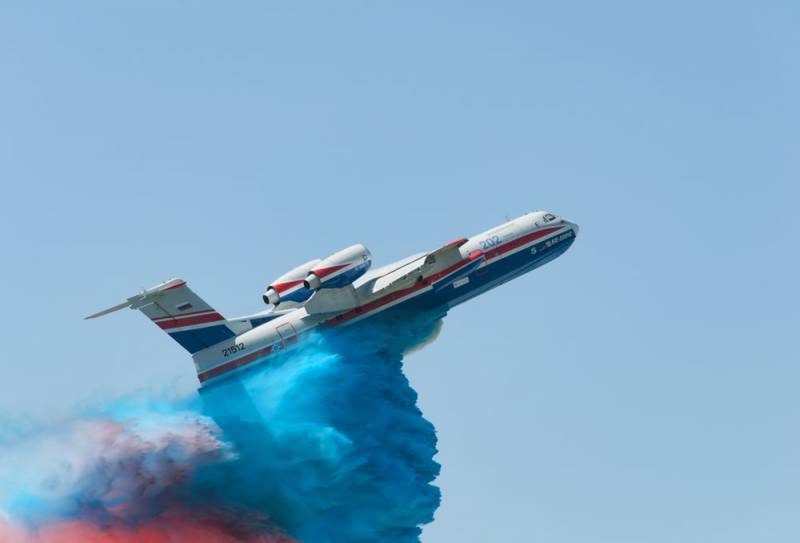 It should be noted that Russia is represented by PJSC United Aircraft Corporation (PJSC UAC), Rosoboronexport, Russian Helicopters, JSC United Engine Corporation (JSC UEC) and other companies. At the same time, Yuri Grudinin, Director General of PJSC Aviation Complex imeni SV Ilyushin (a member of PJSC UAC), has already announced on the sidelines of the exhibition that deliveries of Russian Be-200 amphibious aircraft to the American company Seaplane Global Air Services will begin in 2020 -2021 years.

We agreed, we have signed documents, 15 months from the start of financing. I think that funding is in the month of September
- specified Grudinin.

It should be recalled that in June 2018, Seaplane Global Air Services and TANTK them. G.M.Beriev agreed on a draft contract for the supply of 10 Be-200ES amphibious aircraft. In addition, in September 2018, Grudinin told the media that in Russia the project of the world's largest amphibious aircraft A-40 Albatros (Be-42) will be revived.

It must be added that some states in the United States regularly experience colossal forest fires that destroy entire cities, cause fatalities and cause serious damage. So it’s good that the US authorities were smart enough to agree to such a contract. After all, American industry is not able to create something similar to the Be-200. By the way, earlier we Reportedas China advised the United States to learn from Russia to deal with forest fires.
Ctrl Enter
Noticed oshЫbku Highlight text and press. Ctrl + Enter
We are
UAC is in talks with India on the supply of Be-200
Syrians want to buy MS-21
Reporterin Yandex News
Read Reporterin Google News
Ad
We are open to cooperation with authors in the news and analytical departments. A prerequisite is the ability to quickly analyze the text and check the facts, to write concisely and interestingly on political and economic topics. We offer flexible working hours and regular payments. Please send your responses with examples of work to [email protected]
3 comments
Information
Dear reader, to leave comments on the publication, you must sign in.