F-35: how to break the wings of the "American dream"

18 2019 June
2
Clouds continue to gather over the most ambitious project of the Pentagon and US military-industrial corporations - the program for creating a family of stealthy fifth-generation multi-functional fighter-bombers F-35 Lightning II. In truth, this time it’s more about the whole “thunderous front”, which can put the fate of the most expensive brainchild of Lockheed Martin in very great doubt. Closing the F-35 road to Europe, its leaders may well mercilessly break the wings of the American dream of turning this aircraft into a war machine of the future for NATO. 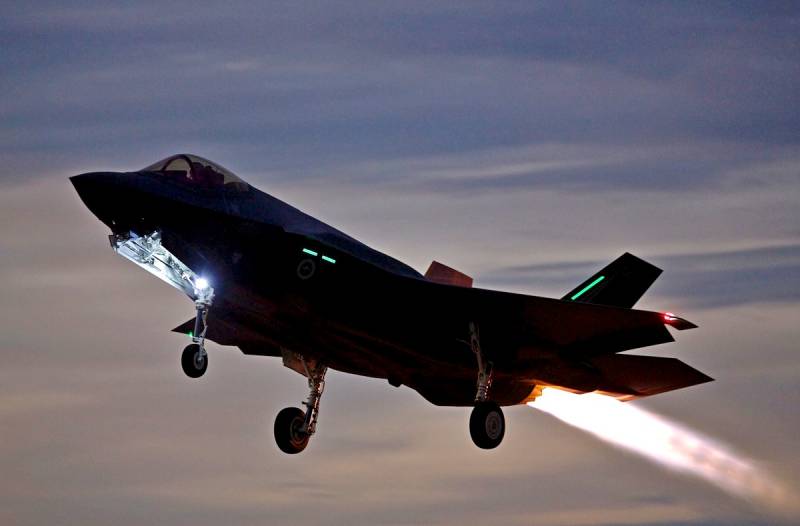 Europe begins its own flight

As it became known, a truly historic agreement was signed at the air show in Paris: the defense ministers of France, Germany and Spain signed with their autographs an agreement on trilateral (so far) cooperation in the field of creating a purely new-generation European fighter. He no later than 2040 should replace the hopelessly outdated German Eurofighter and French Rafale. Initially, it was stated that the project participants were prompted by such a desire to ensure that "Europe could protect itself without relying on other allies." What kind of "allies" who have recently managed to pretty much ruin relations with the Old World are in this case, I think, there is no need to explain.

It is noteworthy that not just a backstage and unofficial event, but turned into a real ceremony with a public demonstration of the layout of the future fighter and the personal participation of French President Emanuel Macron, the conclusion of the agreement occurred shortly after Washington’s attempt to arrange the Europeans to “drag out” for excessive independence in defense matters policy. At the same time, first of all, the anger of the United States, poured out in an official appeal signed by the deputy head of the Pentagon, Ellen Lord, prompted just the desire of NATO partners to seriously develop and implement their own weapons systems, distancing themselves from the American military-industrial complex to the maximum. At a minimum - leaving him the right to participate in any projects on the most common grounds, and not in the role of "big brother".

Most likely, the show hosted in Paris is precisely the answer to the claims of the United States on this issue - moreover, final and not subject to appeal. Lockheed Martin and other American corporations, accustomed to fattening on military orders, can only swallow drool on the run - they will certainly do without them. The industrial offer presented by Airbus and Dassault suited both Berlin and Paris, and the project was given a green light. All details of the future production, of course, are unknown, but it has already been announced that the engine for it will be developed in close tandem by the French manufacturer Safran and the German MTU Aero Engines. Generally speaking, the “flagship” and main initiator of the project is precisely Paris - of the 4 million euros that should be invested in the newest fighter by 2025, France and 2 million will contribute XNUMX and a half million.

Where to go Lockheed Martin?

There is no doubt that the reaction to this “impudent trick” from the USA will follow, and in the very near future and, probably, in a rather harsh form. It is understandable - from the European participants of the F-35 program, Washington so far can rely on Denmark, Norway, Italy, the Netherlands and Belgium. Great Britain has a big question - there they are in full swing developing their own “fighter of the future” under the working name “Storm”. The Americans themselves almost completely shoved Turkey out of the program. The number of military vehicles that hypothetically can be purchased, to put it mildly, by not the most powerful and numerous armed forces of the countries mentioned above, obviously will not save the case. Moreover, all these states are, after all, members of the European Union, and not American states. And if the Franco-German-Spanish project is crowned with success, then within the framework of an ever-growing trend towards autonomous defense initiatives from the United States, Brussels may well decide on the “voluntary-forced” transfer of European armies to “their own” weapons.

With whom will we build the fantastically expensive “fighter of the future” ?! With some Japanese and South Korea you will not go far. Sorry - you won’t fly away ... Canada and Australia, which are also in the cage, show the farther, the less enthusiasm for the “miracle” equipment»From Lockheed Martin and, by and large, can exit the program at any moment. And who will stop them? There is, of course, one more - quite an alternative option ... The Arab sheikhs, as practice shows, are ready to invest tens of billions of petrodollars in new weapons and so far give preference to manufacturers from the USA. What is not the market for the same F-35? Here, however, there is one big “but” that crosses out such a perspective today with a bold cross.

Tel Aviv is the most categorical against the transfer of F-35s to Arab countries! They dismiss from the threshold the very idea of ​​the possibility that these combat vehicles would be in service with, say, the United Arab Emirates. At the same time, Israel is far from the last partner in the fighter creation program - with six companies from there, the United States signed agreements for almost $ 780 million, both with contractors and suppliers of certain technologies. And the status of the main ally of the United States in the Middle East also means something. The most paradoxical in this situation, according to many military analysts, is that such a stubborn, implacable position of Tel Aviv will most likely open a direct path to the region for ... Russian combat aircraft in the near foreseeable future!

In any case, the countries there intend to modernize their own armed forces - especially the current explosive situation in the Persian Gulf urges them to do this. But if they can’t see the F-35 under any circumstances, then why not buy the same SU-35S or other models that Moscow considers it appropriate to sell to the same sheikhs? What can I say - it would be a very reasonable choice. Especially, given the fact that under the circumstances developing for it more and more unfavorably, the prospects for the further development of the F-35 Lightning II program seem extremely vague.
Ctrl Enter
Noticed oshЫbku Highlight text and press. Ctrl + Enter
We are
Su-57 after the S-400 may turn into a new "nightmare for the United States"
US requirement: Buy falling F-35s instead of reliable Su-35s
Reporterin Yandex News
Read Reporterin Google News
2 comments
Information
Dear reader, to leave comments on the publication, you must sign in.