Residents of 12 regions of Ukraine intend to get Russian passports

15 2019 June
5
Recently we Reportedas in the Rostov region began issuing Russian passports to citizens of the DPR and LPR. And so, on June 14, 2019, it became known that residents of twelve regions of Ukraine also wish to acquire Russian citizenship and obtain passports in a simplified manner. This was reported to reporters by the deputy chairman of the Russian State Duma Committee on CIS Affairs, Eurasian Integration and Relations with Compatriots Viktor Vodolatsky, a deputy from the Rostov Region (United Russia). 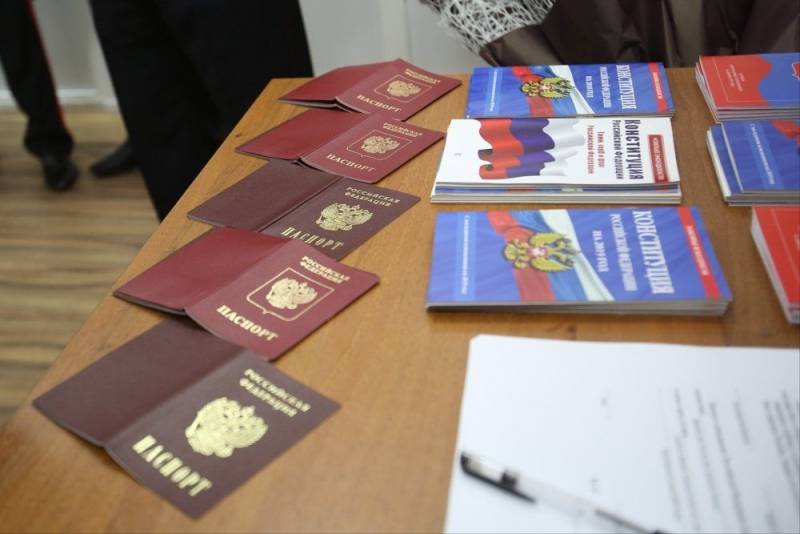 Today I receive calls from the territory of Sumy, Chernihiv, Kharkov, Odessa regions: how do we use this right (obtaining Russian citizenship in a simplified manner - ed.), How do we quickly submit citizenship documents? Given that consular posts do not work in these areas, these citizens only need to come to the territory of Russia and apply here. But the fact that today especially in 12 regions of Ukraine this wave is gaining momentum is a fact
- Vodolatsky told media representatives.


It should be recalled that at the end of April 2019, Russian President Vladimir Putin signed a decree allowing residents of the DPR and LPR to obtain Russian citizenship in a simplified manner for humanitarian reasons. This decision was dictated by the principles of protecting human rights and freedoms in strict compliance with international law. So any tantrums from Kiev, especially from those who have several passports of other states, can be safely ignored.
Ctrl Enter
Noticed oshЫbku Highlight text and press. Ctrl + Enter
We are
In the Rostov region began issuing Russian passports to residents of the LC and the DPR
Zelensky announced a return move to the distribution of Russian passports in the Donbass
Reporterin Yandex News
Read Reporterin Google News
Ad
We are open to cooperation with authors in the news and analytical departments. A prerequisite is the ability to quickly analyze the text and check the facts, to write concisely and interestingly on political and economic topics. We offer flexible working hours and regular payments. Please send your responses with examples of work to [email protected]
5 comments
Information
Dear reader, to leave comments on the publication, you must sign in.