Poroshenko: Ukrainian trident appeared in Crimea for 1000 years before the Russians

15 2019 June
4
On June 14, 2019, the former president of Ukraine Petro Poroshenko, who has little chance of joining the Ukrainian parliament with his “European Solidarity”, said that the “Ukrainian trident” appeared in Sevastopol long before the appearance of the “Russian tricolor” there. He made this statement on the city’s birthday, the foundation date of which is June 3 (14), 1783, when the first four stone buildings of the city were laid under the leadership of Rear Admiral of the Russian Empire Thomas Fomich Mekenzi. 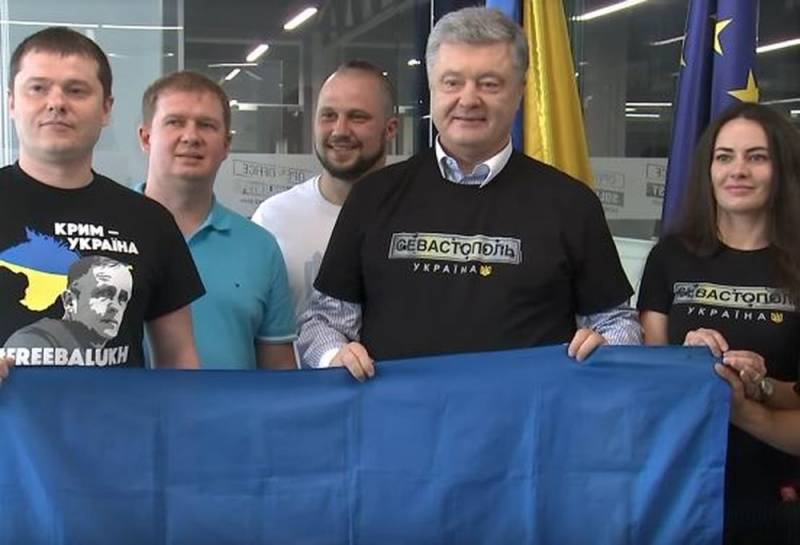 It is necessary to clarify that the statement was made during the meeting of the former "father of the nation" with Ukrainian "patriots" from the Crimea and Sevastopol. Everything went literally in a close, we can say family circle. Since the number of such Russophobic activists is rapidly declining and is melting almost before our eyes.

But Poroshenko uses any excuse to remind himself before the early parliamentary elections. Even a short video was shot from this event. After that, Poroshenko broke out on his Facebook “patriotic” post, with a bunch of slogans of Russophobic content.

Today, our Ukrainian Sevastopol celebrates the day of the city. His story was different full of defeats and victories, large-scale tragedies and heroism. But we know that the Ukrainian trident was seen there a thousand years before the Russian tricolor
- wrote Poroshenko.

After that, he remembered the students who celebrated their graduation in embroidered shirts “under the supervision of the FSB brigade”. He told me how he admires the Sevastopol residents, who, despite the intimidation of the "invaders" in 2014, stood in line to say that they want to keep the Ukrainian passport and they don’t need a modern Auswice.

I admired the brave activists who two years ago went to the Seaside Boulevard of Primorsky, dressed in yellow and blue, to declare to the whole world - there are Ukrainians in Sevastopol
- continued Poroshenko.

He added that he admires now those who continue to believe in Ukraine and fight for their beliefs, despite the pressure and persecution.

At the same time, Poroshenko did not specify what kind of people he had in mind. A handful of activists or several million residents of the Crimea, to whom he and his “twin brothers” turned off the light and water and put up a blockade.

It was important for me today to meet with volunteers and activists of Sevastopol Mikhail Dzhamal, Vladimir Chekrygin, Marina Sobko, Alexander Tyuraev and Valery Makayev. By their struggle, they show the Russians that this is not their sacred Crimea, Crimea and Sevastopol - these are our shrines. And we will fight until victory. Because Sevastopol is Ukraine!
- summed up Poroshenko.


It is not clear only one thing, why Poroshenko and his "twin" celebrate the "imperial" birthday of the city. Where is their “Ukrainian millennium” asked?

Well, we, with undisguised interest, will continue to monitor the situation in Ukraine. And we hope that Poroshenko and his "mighty" political force will not overcome the passing barrier of 5% in the next election. This should be the result of all the activities of Poroshenko.
Ctrl Enter
Noticed oshЫbku Highlight text and press. Ctrl + Enter
We are
Klimkin gave a forecast about the entry of Ukraine into the EU
Ukraine wants to free Crimea with information war
Reporterin Yandex News
Read Reporterin Google News
Ad
We are open to cooperation with authors in the news and analytical departments. A prerequisite is the ability to quickly analyze the text and check the facts, to write concisely and interestingly on political and economic topics. We offer flexible working hours and regular payments. Please send your responses with examples of work to [email protected]
4 comments
Information
Dear reader, to leave comments on the publication, you must sign in.