14 2019 June
5
On June 14, 2019, the Interstate Aviation Committee (IAC) website published a preliminary 104-page report on the investigation of the crash of the Sukhoi Superjet 100 airliner (SSJ100), registration number RRJ-95B (aircraft RA-89098), which occurred on May 5, 2019 at the airport Sheremetyevo. It contains photographs of equipment and damage, maps, diagrams, drawings, and in detail, every minute, everything that happened to the airliner, including the crew’s actions, is painted. 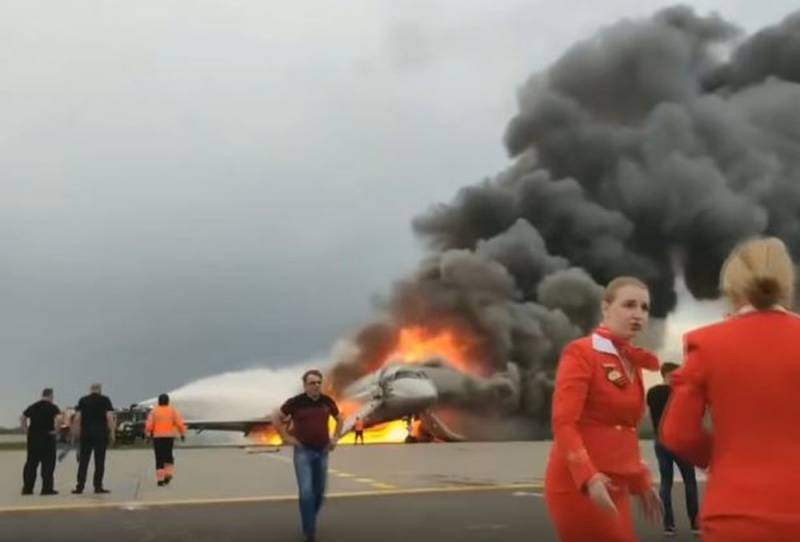 According to the IAC preliminary report, by 14:40 p.m. all the front and luggage compartment doors were closed. At 14:42:48, after receiving information from the ground personnel about the readiness for launch, the second pilot got in touch with the Sheremetyevo-Perron dispatcher. At 14:45:30, after a repeated request from the crew, the dispatcher allowed the engines to start.

At 14:50:15 the crew proceeded to taxi. At 14:51:05 the crew was transferred to contact with the taxi manager. At 14:51:40 the crew began to carry out checks before takeoff. At 14:54:25, after the report of the co-pilot on finding the aircraft at the preliminary launch, the crew was transferred to contact with the Sheremetyevo-Vyshka dispatcher. At 14:57:20, after obtaining the permission of the dispatcher, the crew taxied to the executive start of runway 24C, where they expected permission to take off for about 5 minutes. At 15:02:23, the dispatcher allowed the take-off. The crew confirmed permission. At 15:02:49 the traction control was turned on. The separation of the aircraft from the runway occurred at a speed of 285 km / h).

Lightning hit the plane at 15: 08: 09.7. It was at this time that a noise effect was recorded. At 15: 08: 11.9, the autopilot turned off, accompanied by an audible alarm and switched to the “direct mode” mode (direct control). From 15:08:12, problems were registered in the communication line. Manual piloting began at 15:08:16 from the left control post. After that, the commander (FAC) decided to return and instructed the co-pilot to report “pan-pan” (urgency signal). At 15:09:35 radio communication was restored at the emergency frequency. At 15:09:39, the second pilot reported to the dispatcher about the return to Sheremetyevo airport, reported a loss of radio communications and a transition to direct control. The dispatcher allowed the decline. The plane began to decline. At the dispatcher’s request whether any help was needed, the crew replied that so far everything was normal and regular.

At 15:12:32, the commander explained to the senior flight attendant that the plane was returning, while he drew attention:

Not emergency, nothing, just coming back
.

At 15:27:51, the dispatcher informed the crew of the weather information and authorized the landing. The crew confirmed the landing permit. At 15:28:26, when passing an altitude of 490 m along QNH (altitude along a radio altimeter 335 m), a weather radar alarm was recorded, accompanied by a voice message. However, this warning informing the crew about the possible presence of a wind shear ahead of the flight course, the pilots did not discuss.

At 15:29:54 at an altitude of 5.2 m, an audible alarm was triggered to reach the altitude recommended for cleaning the throttle (engine control lever) to the “low gas” position during the leveling process. Simultaneously with the appearance of an alarm, the commander began cleaning the ore. At 15:30:00, at a distance of ≈900 m from the entrance end of the runway and an instrument speed of 293 km / h, the first touch of the runway aircraft occurred.

In direct control mode, automatic release of the brake flaps (spoilers) is not provided, the crew did not produce manual spoilers. After the landing, there was a separation ("rebound") of the aircraft to a height of 2 m.

After the “bounce”, the BRU (lateral control stick) continued to be kept completely “away from itself”, this led to the development of the pitch angular velocity for diving to 10.5 degrees per second, a rapid decrease in pitch angle to 4 degrees for diving and re-landing of the aircraft ahead of to the front landing gear. Re-landing occurred 2.2 seconds after the first one at an airspeed of 287 km / h.

During the first “bounce”, when the aircraft was in the air, the commander turned the throttle to the “maximum reverse” position, but the opening of the reverse flaps did not occur. The second “bounce” from the runway occurred at a height of 5–6 m. 2-3 seconds after the second “bounce” of the ore, the throttle was moved to the “take-off thrust” position, and the BRU to the “self” position until it stops. This is interpreted as an attempt to go to the second round.

At 15:30:05 at an instrumental speed of 258 km / h, the third landing of the aircraft took place with a vertical overload of at least 5 g. The nature of the tracks on the runway at the third touch shows that the main landing gear by this time had already been partially destroyed. Then there was the breaking of the main landing gear, the destruction of the aircraft structure, fuel spill and fire. Flight recorders recorded information showing a possible loss of engine control.

The execution of sections of the “checklist” by the on-board tape recorder is not fixed. At 15:30:49 the crew of the flight attendants was recorded:

To unfasten belts, to leave everything, on an exit ...
. 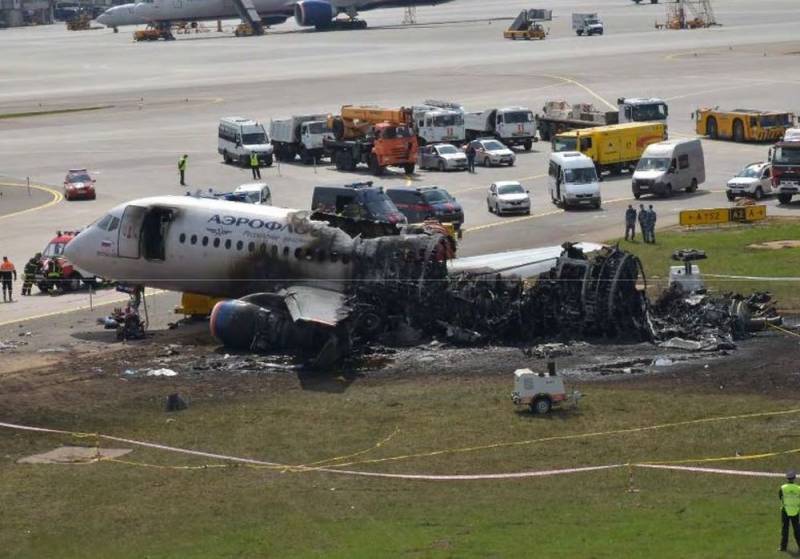 It must be added that systems and technique aircraft at the time of the accident worked normally. This was stated by the head of the Ministry of Industry and Trade Denis Manturov, referring to the IAC report.

The systems worked normally, with the exception of lightning striking the plane. When (due to lightning) the autopilot disconnected, but the system worked so clearly, it provided the pilot with the opportunity to continue flying. And it was possible either to continue the flight along a given route, or to be in the zone of fuel production for a subsequent landing, but the pilot made this decision (to land)
Said the minister.

In turn, the IAC reported that the Technical Commission outlined a large range of studies and necessary work, including with the participation of plenipotentiaries of states jointly involved in the development and production of this type of aircraft.
Ctrl Enter
Noticed oshЫbku Highlight text and press. Ctrl + Enter
We are
IAC became interested in leaking information about the SSJ-100 crash
The crash of the SSJ-100 in Sheremetyevo killed 41 people
Reporterin Yandex News
Read Reporterin Google News
5 comments
Information
Dear reader, to leave comments on the publication, you must sign in.