What will Crimea give to the new railway?

11 2019 June
6
In the first decade of December this year, it is planned to open the railway part of the Crimean bridge. The peninsula will finally be “tied” to continental Russia. Does the completion of infrastructural mega-projects that made Crimea the fastest growing region of the country mean the end of the “economic miracle”, as it was before in Sochi after the Olympics and in Primorye at the end of the summit, or is this just its beginning? 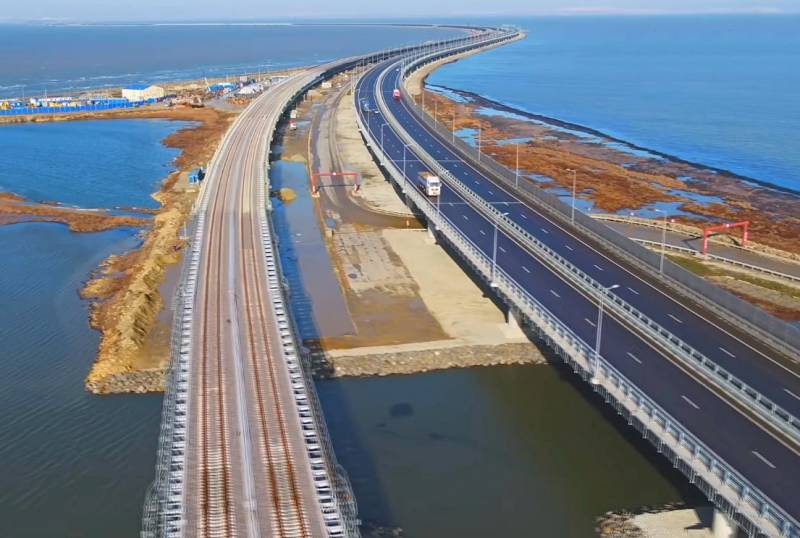 The Republic of Crimea and Sevastopol are the most special subjects of the Russian Federation, taking into account their geographical location and the circumstances of reunification with the "mainland." The previous “owners” did not invest money in the peninsula, which is why its infrastructure was in a deplorable state. It is the effect of the low base with large-scale investments that ensured its breakthrough growth in key indicators.

The volumes of construction and retail trade have increased, and wages in the public sector have grown. Crimea has become interesting to Russian tourists. However, this had its opposite side. Prices, for example, for foodstuffs, have seriously risen, and many questions arise for their pricing formula. Will reliable rail communication with the mainland help solve these problems and ensure further stable development of the peninsula?

The first trains will go from Crimea to Moscow and St. Petersburg, but by the next holiday season there will already be 11, and in total 29 pairs. To keep up to December, builders work without days off in several shifts, moving across the bridge towards each other. Recall that the contractor handed over the automotive part six months earlier than the contractual deadline.

The launch of car traffic has already given a powerful increase in tourists to the peninsula from 5,5 to 6,8 million. A huge number of residents of neighboring Kuban, Stavropol and Rostov region were able to easily ride a private car in Crimea for the weekend. With the beginning of the railway connection, the peninsula will become available throughout the Russian Federation. Yes, a new terminal was opened at Simferopol Airport, but the prices for air travel bite, because the increase in tourist flow that came to them did not exceed 2-3%. The representative of the tourism industry Dmitry Romashkin explains:

The route network of Russian Railways is many times greater. Many will be able to leave directly from their small town and get to the Crimean sea.

Economist Dmitry Kondratiev believes that 4-6 million more tourists will be able to arrive in Crimea by rail. But it is even more important that the cargo flow will increase, at the initial stage, by 1,5-3 million tons:

This will partially relieve the load from the Black Sea coast of the Caucasus.

This will have a very beneficial effect on the development of the construction industry in Crimea. Logistics will be simplified, and tariffs for the delivery of building materials will become more adequate. Increased mobility will contribute to the development of the regional labor market. Whether the launch of the railway will affect the reduction in food prices remains a very controversial issue. On the one hand, the head of the Republic, Sergei Aksyonov, believes that improving logistics and the emergence of new suppliers will allow prices to “stabilize”. That is, there is no question of lowering them. On the other hand, the aforementioned Dmitry Kondratyev assumes that the end consumers will not notice the effect, but Crimean entrepreneurs who will simply increase their own margins will benefit more from this.


Well, we won’t guess, we’ll see. In general, the completion of the construction of the Crimean bridge is an important milestone in the history of modern Russia. Finally, the peninsula will be reliably connected with the "big land", and ordinary Russians from the hinterland will be able to visit the main resort of the country.
Ctrl Enter
Noticed oshЫbku Highlight text and press. Ctrl + Enter
We are
Peace enforcement operation. Russia inflicts a preemptive strike on Kiev
US Global Economy: An End That Sneaks Noticeably
Reporterin Yandex News
Read Reporterin Google News
6 comments
Information
Dear reader, to leave comments on the publication, you must sign in.