Ukrainian general: the attack on the Donbass will result in huge losses

9 2019 June
0
The former deputy chief of the General Staff of the Armed Forces of Ukraine, Lieutenant-General Igor Romanenko, commented on the Ukrainian edition of Apostrophe a statement by the President of Ukraine Vladimir Zelensky regarding the aggravation in the Donbass and explained the general situation in the region. Romanenko held the above position from 2006 to 2010. 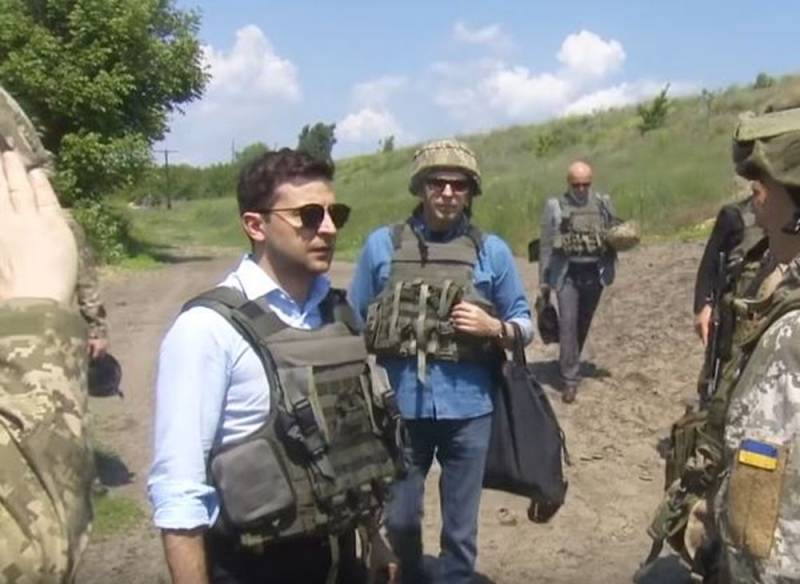 It should be noted that Romanenko rose to such a position and such epaulettes not because of his qualities as a military leader, but thanks to the continuously generated Ukrainian “patriotism”. By the way, it was he who, quite recently, in April 2019, proposed Ukraine to seize part of Russia in the event of its “collapse”. He repeatedly stated this, before that, that Russia would necessarily lose part of its territories.

As for Zelensky, the fact of exacerbation in the Donbass, coinciding with by appeal Leonid Kuchma to the settlement of the conflict, he considers "the loss of control over mercenaries." Then Zelensky called on the Russian side to "restore control over these units." And it was precisely these expressions of Zelensky that he considered it necessary to comment on Romanenko.

The aggravation in the Donbass is Vladimir Putin’s education of our young commander in chief. The Kremlin is threatening a new gas war. Putin did not congratulate Vladimir Zelensky on his inauguration - this is also very significant. When a truce is needed, the Russian president gives the command. When there is no command, or the opposite is given, what happens now. And we are forced to prevent this - they respect only power. If we sit in holes, they will move forward, which means losses among our military
- Romanenko reported.

After this, Romanenko added that the problem of control on the part of Moscow over the “fighters” always existed. The Russians allegedly even "removed" the leaders of uncontrolled detachments. Regarding the words of Zelensky, Romanenko said that the introduction of martial law could be a tough answer. However, Ukraine has already passed this. A break in diplomatic relations is also possible. But these are all extreme measures that will certainly not lead to peace and settlement.

I would talk to Putin on the phone. He would say: if we want to move forward to the world, let's not have shelling, let's establish trade. And hear him answer. Given the nature of Zelensky, he is able to do this. He does not have experience, but circumstances teach the supreme commanders. The state and people are paying for it, but we have no other way
- said Romanenko.

Romanenko said that the first thing to do is to stop the hostilities - not the war, since the war is a more complex issue and it will be possible to stop it not earlier than in a few years. Then, after the fighting has stopped, a real hostage exchange should take place. At the same time, you need to start recovery economic relations with the territories of Donbass not controlled by Kiev, but trade according to the laws of Ukraine. This trade is very profitable for Ukraine, and where they trade, "there is almost no war there." He called it an integrated approach. The main thing is to find common ground, but at the same time we must remember the strategic tasks of Ukraine. The general believes that a pure victory, as someone wants, is populism.

An active offensive is a gamble, given what forces we have and what they have. We gave not only nuclear weapons, but also missiles. We have a missile with a range of 120 km - "Tochka-U" and it is outdated. Where there are no modern weapons, the lives of soldiers are lost. Is this our way? Are we ready to put tens of thousands of our military to contain this aggression? I think no. Even our initiative should not be such
- emphasized Romanenko.

In his opinion, peace can be established through the "Plan of Truth" and the "Plan of Time." He added that in the next 10-15 years, Ukraine is not expected, either in NATO or in the EU. And the Russians, according to him, “started the war” because they were afraid that NATO troops would go into the Crimea and approach the borders of Russia.

Romanenko came to the conclusion that the situation in Ukraine is now the same as it was 100 years ago at the conclusion of the Brest Peace on March 3, 1918. Therefore, Romanenko proposes to conclude an agreement with Russia, during the presidency of Zelensky. Of course, with the participation of the Americans. He does not consider European leaders any guarantee, although he respects them. He believes that Europe has little impact on Russia. Moreover, the conflict in the Donbass lasts almost as long as the Second World War.

The United States must sign a partner agreement with us outside of NATO with the condition that for 5 years we will not join NATO and the EU and will not have a base in Ukraine. And the Russians will clean up from the Donbass and reduce the number of military presence in Crimea to the level of 2014 - from strategic to tactical. It will be very good for Donald Trump. Let them not be re-elected on the negative, as they are now digging under Joe Biden, and they are trying to squeeze Ukraine there. Let re-elected on the positive. Then he will receive not only a library, as is customary with American presidents after two terms, but also a Nobel Peace Prize
- summed up Romanenko.
Reporterin Yandex News
Reporterin Yandex Zen
Information
Dear reader, to leave comments on the publication, you must sign in.