April 13 2018
0
The U.S. aircraft carrier strike group (ACG), led by the nuclear-powered aircraft carrier USS Harry S. Truman, left Norfolk base on Wednesday, April 11, heading for the coast of Syria. In addition, the destroyer URO USS Porter is already in Syrian waters. A ship of the same class, USS Donald Cook, will be able to join the USS Porter on April 16th. 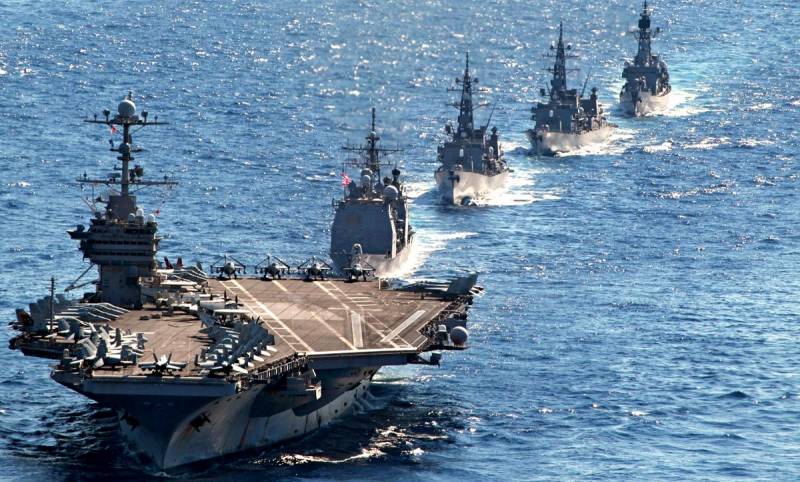 Although U.S. officials say the ACG was sent to the Mediterranean Sea as part of normal rotation, there is little doubt that the true reason is the upcoming and already widely publicized political, diplomatic and public channels missile strike on Syria.

Depending on the speed of traveling to the destination, the transfer of the carrier group from Norfolk to the coast of Syria, according to American practice and standards, will take 10 (speed 20 knots), or 8,3 (24 knots), or 7,1 (28 knots) days . Thus, Harry S. Truman with his protection will arrive in the Eastern Mediterranean no earlier than April 17, and no later than April 20.

Recall that in 2017, the Americans launched 59 Tomahawk cruise missiles at the Syrian air base Shairat, of which, according to the Russian Ministry of Defense, only 23, that is 38,98%, were hit. In other words, for guaranteed destruction of the target, it is necessary to launch no less than 2,56 missiles. Although the Russian military, who commented on the results of the attack on the Shairat base, reacted with irony to the effectiveness of the attack, in fact, for high-precision weapons, the result shown is very good.

At the same time, the planned punishment of Syria, due to several circumstances, does not belong to the number of routine and so beloved by the Americans actions in the framework of “diplomacy of aircraft carriers” and educational missile strikes.

At firstHaving declared Russia not so long ago as a “revisionist power" and having ranked it among the opponents of America, Washington cannot but realize that against the background of the newly appointed opponent it looks very pale. In the framework of power logic, it is Russia today that is successfully carrying out special, “hybrid” and military operations, and in the matter of informational influence on the world community, it has perhaps surpassed the achievements of the USSR in the 1970s and 1980s. Russia is acting effectively, and the US’s effectiveness in terms of global leadership is currently in question. Therefore, the refusal of a missile strike on Syria will result in a complete loss of the face of the American leadership.

SecondlyThe commitment of the American establishment to the ideas of network centrism and the information society has played a cruel joke with the planners of the Syrian operation. On April 11, US President D. Trump wrote on his Twitter page: “Russia promises to shoot down all the missiles launched over Syria. Get ready, Russia, because they will fly in - good, new and smart. Trump apparently considered his remark a successful response to a warning from the Russian Federation that it reserves the right to shoot down American missiles if it considers that they threaten the security of Russian citizens in Syria. In fact, Trump’s replica means that to the estimated number of missiles for hitting n targets it is necessary to add a minimum of + 25% if the number of missiles in the salvo is large enough, and at least + 100% if a limited-scale strike is planned. After all, now you need to take into account the reaction of “these Russians”, and who knows, suddenly they will really shoot down missiles?

Thirdly, should take into account the long-term effects of the strike on Syria. There is no certainty that this is well understood in Washington. Meanwhile, the US and NATO attack on Yugoslavia in 1999, in addition to the short-term consequences of the dismemberment and collapse of Yugoslavia, led Russian responsible and wider public circles to a cold understanding that Russia is the next on the list of defenseless victims of American aggression. The result of this understanding is known. This is exactly the Russia that exists today.
Ctrl Enter
Noticed oshЫbku Highlight text and press. Ctrl + Enter
We are
US put its fleet against the Crimean bridge
AUG USA enters Mediterranean Sea: Putin gathers military council
Reporterin Yandex News
Read Reporterin Google News
Ad
We are open to cooperation with authors in the news and analytical departments. A prerequisite is the ability to quickly analyze the text and check the facts, to write concisely and interestingly on political and economic topics. We offer flexible working hours and regular payments. Please send your responses with examples of work to [email protected]
Information
Dear reader, to leave comments on the publication, you must sign in.