3 2019 June
6
For the first time in the history of the domestic automobile brand Lada, its representative Lada Vesta SW Cross became a police patrol car in Europe. 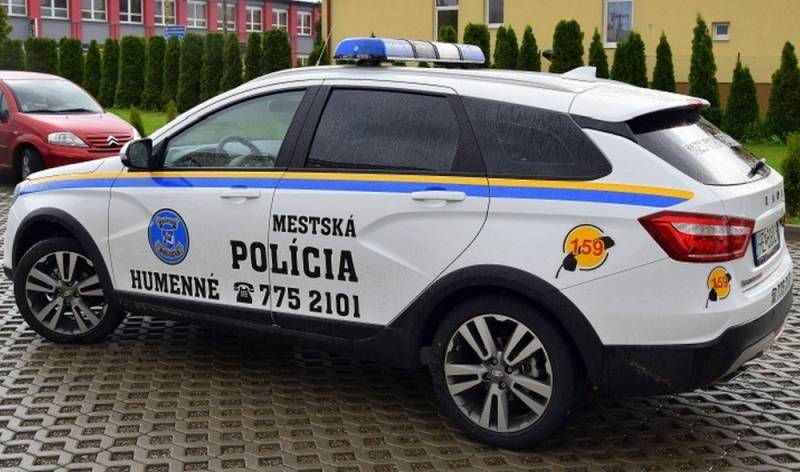 The authorities of the Slovak district of Humenne, bordering Ukraine, reported that a Russian-made police car Lada Vesta SW Cross, which was acquired by them under leasing conditions, will patrol the streets of the district’s capital. It is reported RT.

The choice of this particular brand of car was due to the fact that the capital of the administrative region, the city of Humenné, is a small and rather poor settlement with a population of 36 thousand people, in which low-cost KIA Seed and Skoda Fabia cars patrolled the city, which eventually developed their life.

Recall that the Lada Vesta is a Russian serial compact car of a small class, which has been produced since 2015, and the Lada Vesta SW Cross is a 5-seater passenger wagon with increased cross-country ability.

To date, more than a hundred cars of this brand are in operation of traffic police and traffic police of various regions of Russia. In particular, Lada Vesta is used in the Nizhny Novgorod and Sverdlovsk regions, as well as in Udmurtia.

This inexpensive, unpretentious car has established itself as an official car in regions with difficult weather conditions.
Ctrl Enter
Noticed oshЫbku Highlight text and press. Ctrl + Enter
We are
Domestic car became a sales leader in March
The diplomatic scandal between Moscow and Bratislava is gaining momentum
Reporterin Yandex News
Read Reporterin Google News
Ad
We are open to cooperation with authors in the news and analytical departments. A prerequisite is the ability to quickly analyze the text and check the facts, to write concisely and interestingly on political and economic topics. We offer flexible working hours and regular payments. Please send your responses with examples of work to [email protected]
6 comments
Information
Dear reader, to leave comments on the publication, you must sign in.