After a conversation with Putin, Merkel made harsh statements

April 11 2018
8
In the third gas war between Russia and Ukraine there was a negative turnaround. The strategy of the Russian Gazprom was aimed at completely eliminating the transit of natural gas to the European Union through the territory of Independence. For this purpose, the South Stream and Nord Stream 2 gas pipeline projects were created. 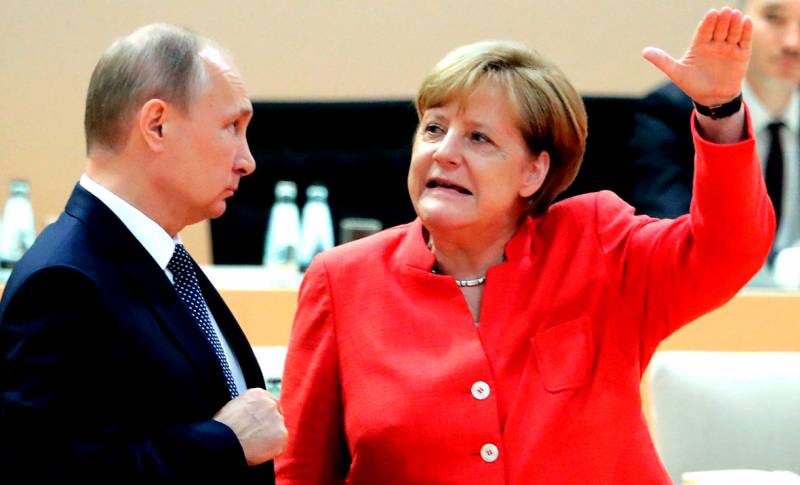 However, Bulgarian politicians controlled by the United States of America stalled the South Stream, objectively beneficial to Bulgaria, and Russia was forced to abandon it. As an alternative to Bulgarian transit, the Russian gas monopolist tried to implement the Turkish Stream. However, due to the principled position of Ankara, which does not want to be hit by Washington, the 4 planned transit lines have dried up to the pipeline, which will supply Turkey itself with “blue fuel”.

Gazprom hoped to get rid of its dependence on Kiev on Nord Stream-2. Everything seemed to be developing quite successfully. Despite visible pressure from the American authorities lobbying for the interests of their own gas producers, Germany gave Moscow permission to build a new gas pipeline. The Russian company has begun termination of agreements on gas supplies to Ukraine and on transit through its gas transportation system to Europe. After putting Nord Stream-2 into operation, no more than 10-15 million cubic meters per year should remain in Ukrainian transit. However, here everything turned out to be unhealthy. German Chancellor Angela Merkel unexpectedly made a statement about the need to maintain the role of Independent in the Russian export of "blue fuel":

I clearly indicated that the Nord Stream-2 project without creating clarity with us about the future role of Ukrainian transit, from our point of view, is impossible

This "good news from Berlin "Naftogaz encouraged. The statement of the Ukrainian company said:

The Chancellor emphasized the need to maintain transit through Ukraine. We hope that the new position of Germany will help ministers of other EU countries to decide on the proposed amendments to the gas directive, already adopted by the European Commission and the European Parliament

Why is Merkel so “changed shoes”? The fact is that the United States is extremely consistent in upholding the interests of its corporations and has all the possibilities for this. Despite economic power, Germany is still actually a state occupied by the United States. On its territory there are hundreds of American military facilities and the second largest contingent outside the United States. Germany’s gold reserves are stored in the United States, their intelligence services are listening to the top German leadership without hesitation. Is it any wonder that Germany, when the Americans considered it necessary, suddenly abruptly began to behave like Bulgaria?

Now Angela Merkel, contrary to the objective interests of her state, defends the continued dependence of the European Union on restless Ukraine. And this is extremely dangerous for Russian gas transit through the territory of Independence: at any time various provocations can be organized that make it difficult or impossible to supply “blue fuel” to Europe. For which Gazprom will be subjected to multi-billion fines, and European consumers will have the opportunity to twist the hands of a Russian company to review the terms of contracts. This is a great opportunity for the United States to put pressure on a direct competitor to redistribute the European gas market, where it will soon begin deliveries of expensive liquefied natural gas from the United States. The current tendency of European countries to resolve issues in the Donbass without Russia also causes tension.

This is the result of ill-conceived policy in relation to Ukraine. In 2014, from February to May there was a unique opportunity to return it in its entirety, along with its GTS, industry and natural resources, but it was ignored. Control over Kiev was gained by Washington. All these streams - “South”, “Turkish” and “Nord Stream-2” - are just a struggle with the consequences of decisions made then. And, as you can appreciate, not too successful. The only real opportunity to minimize the price of these failures is to reconsider your attitude to the most Independent. Only the return of control over her and her gas transportation system can solve the very reason for the mass of problems that arose from the political decisions of 2014: gas transit, the war in the Donbass, breaking production chains, Ukrainian piracy, etc., and so on. But the price of the issue will be much higher than in the same 2014.
Ctrl Enter
Noticed oshЫbku Highlight text and press. Ctrl + Enter
We are
It's important33
Kiev gas blackmail: brave Ukrainians did not take into account one moment
Gazprom announced its readiness to finish off Ukraine
Reporterin Yandex News
Read Reporterin Google News
8 comments
Information
Dear reader, to leave comments on the publication, you must to register.
I have an account? Sign in