Shots in Kosovo: will a new war begin in the Balkans?

29 May 2019
2
The Balkans continue to justify their dubious title of "the powder magazine of Europe." On the eve of a resonant event that could lead to an escalation of the conflict between Serbia and the unrecognized Belgrade Republic of Kosovo. Of particular importance is that as a result of the provocation of the Kosovars, a citizen of the Russian Federation, who is also an employee of the UN mission, was seriously injured. Will yesterday’s event turn out to be the “first shot” because of which Moscow will have to go “on principle” and intervene? 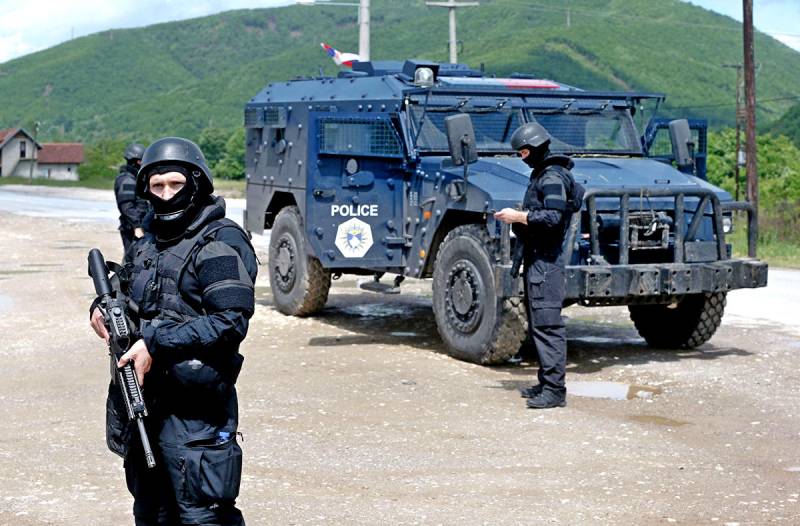 On the morning of May 28, two hundred special forces soldiers of the partially recognized Republic of Kosovo, with the support of armored vehicles, invaded Serb-inhabited areas. Their goal was allegedly an investigation into the death of an Albanian policeman. The Kosovo special forces had no right to break into Serbian municipalities with weapons mounted on armored personnel carriers, and the Serbs tried to stop them by building barricades on the way. However, the Albanians, without ceremony, engaged in firefights and stormed them.

As a result of a daring armed raid, the Kosovars captured captured Serbs, including our compatriot Mikhail Krasnoshchev among the detainees. The Russian citizen possessing diplomatic immunity was brutally beaten and taken away by Albanians. The severity of injuries may be indicated by a message from the UN:

Two people who are arrested citizens were taken to hospital. One of them is a Serb, the other is a Russian. They have bodily injuries.

The Russian Foreign Ministry condemned the actions of the security forces of the unrecognized Republic, rightly indicating that this was the result of many years of indulgence on the part of the United States and the European Union, and demanded his release. Serbian state television, in turn, stated that, on the orders of President Vučić, the country's army was put on full alert. Does this mean that Belgrade is ready for war with Pristina?

The fact is that on the eve of the Albanian provocation, Alexander Vučić publicly spoke about his attitude to Kosovo. Recall that this region, historically owned by the Serbs, was torn away from it by Albanian separatists in 2008 with the active support of the United States and its allies. As a result, a "pirate republic" appeared in Europe, which is under the auspices of Washington, about which we told earlier.

The Serbian leadership, despite the fact that in 1999 NATO bombed the country for 78 days in 2025, leads it to the European Union. The entry is expected to happen as early as XNUMX. However, the problem of Kosovo is on the “European path”. Belgrade is unable to recognize the fact that it has rejected its most important region. All existing plans to resolve the territorial problem were successfully torpedoed by Pristina.

Just a day before the Albanian special forces raid, President Vučić spoke very broadly about his attitude to secession from Kosovo from Serbia. According to him, this is a “grave national defeat”, however, it is necessary to move on. In fact, in a streamlined form, the Serbian president voiced the concept of "coexistence, but not recognition." On the part of the leadership of the state, whose population is extremely sensitive to the Kosovo problem, this is a big step forward.

However, the Albanian partners in the political process decided to go even further. They considered the hint of concession a manifestation of weakness and sent two hundred fighters with armored vehicles to restore order. The reaction of Belgrade and Moscow is very indicative. Despite the announcement of “full combat readiness,” the Serbian army has not yet carried out full-scale strategic deployment, artillery does not occupy combat positions, and military servicemen are not mobilized. Belgrade understands that if its troops cross the border of Kosovo, the United States and NATO will intervene on the side of Pristina, and everything will end badly. The Russian Foreign Ministry also limited itself to the traditional "concern." Thus, armed rudeness is winning.
Ctrl Enter
Noticed oshЫbku Highlight text and press. Ctrl + Enter
We are
"Russian trace in Kosovo": Moscow is trying to draw into the conflict in the Balkans
Kosovo: “pirate republic” is not averse to bite off a new piece from Serbia
Reporterin Yandex News
Read Reporterin Google News
Ad
We are open to cooperation with authors in the news and analytical departments. A prerequisite is the ability to quickly analyze the text and check the facts, to write concisely and interestingly on political and economic topics. We offer flexible working hours and regular payments. Please send your responses with examples of work to [email protected]
2 comments
Information
Dear reader, to leave comments on the publication, you must sign in.