Unsuccessful Tu-334: could Russia get an alternative to the Superjet?

20 May 2019
37
The crash of the Sukhoi Superjet 100 has put the entire program on the brink of existence. However, is there an alternative to it? 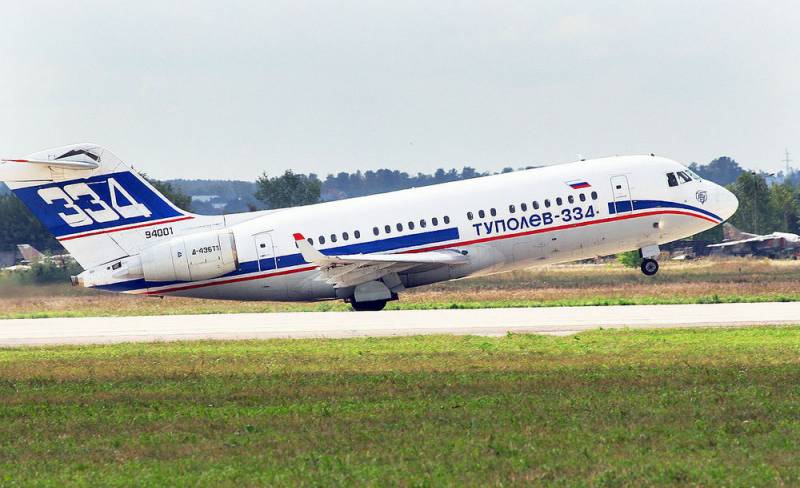 Around the crash of the Sukhoi Superjet 100, the debate will settle down soon. Recall that as a result of the disaster in Sheremetyevo killed 41 people out of 78 on board the aircraft. The people sitting in the back of the fuselage did not survive. At the same time, the thesis that suitcases that someone tried to save prevented their survival, apparently, is incorrect. Apparently, passengers caught in a fiery trap would have died even if none of the people in front had taken carry-on baggage with them.

The investigation has not yet been completed: apparently, a complex of factors led to the tragedy. In general, we will try to ignore the incident a bit and look at the situation from the side.

Oddly enough, the project is largely quite successful, by the standards of Russia. First you need to understand the conditions in which the "Superjet" was born: and this is not only in the dashing 90s, when the entire aircraft industry in Russia literally breathed in the air. Just before the Sukhoi Superjet 100, Russian aircraft manufacturers generally had no experience in creating truly modern winged vehicles.

To verify this, you can look in depth and honestly admit: the USSR could not produce passenger aircraft competitive in the Western market. Yes, with the combat aircraft of the Country of the Soviets, everything was more or less, however, this did not apply to passenger airliners. It is appropriate to recall the emergency first Soviet Tu-104 passenger jet: 200 out of 37 built vehicles crashed, and in total 1137 people died in accidents. The crown of the Soviet civil aircraft industry was the Tu-154, but its history is full of dark spots. Produced by a relatively modest by world standards series of 1026 cars, the plane got into serious accidents dozens of times: 71 cars were lost in total. One-year-old 154 - the American Boeing 737 - was not an example of a more perfect and reliable machine. Of the ten thousand aircraft built in accidents and disasters, 211 were lost. At first glance, it seems that this is a lot, but in percentage terms it is much less than the death of Tu-154 aircraft.

There is no faith in the late Soviet "miracle liners", which allegedly cut their wings. Four-engine wide-body IL-86/96 were not successful machines, which led to the actual abandonment of them. And the fact that they are now trying to revive the IL-96 in the “new wrapper” looks like a crime.

Finally, we came to the most important thing: could the Soviet / post-Soviet aircraft industry build a plane that would occupy the Superjet niche. Formally, there was such a plane. The short-range passenger Tu-334, the development of which the Tupolev Design Bureau began back in the 80s, some "experts" even now see as a worthy alternative to the Sukhoi Superjet. However, such an assessment is faced with a harsh reality, where the brainchild of the Tupolev design bureau is no longer in place.

Let's start with the good. As already mentioned, the Tu-334 is not just a paper project. In 1999, the machine completed its first flight and the main components and assemblies were created and tested long ago. The aircraft has a very different layout from the "Superjet". In technical terms, the aerodynamic design is a twin-engine low-wing with a rear turbojet engine, with an arrow-shaped wing and a T-tail. Externally, the Tu-334 looks like a greatly reduced and thickened Tu-154, which is not surprising when you consider that both machines were designed in the same design bureau.

The layout of the engines immediately attracts attention. Such a scheme provides several advantages, in particular, the placement of engines in the rear of the fuselage can improve the aerodynamic qualities of the wing and reduce noise in the cabin. This is where the major benefits end. But the drawbacks of the scheme used on the Tu-154/334, more than enough:


As you can see, the purely conceptual superiority of the Sukhoi Superjet 100 over the Tu-334 is almost complete. And this we do not take into account the dangerous design of the chassis of the latter, an archaic cabin with three crew members, on-board electronics that are very outdated today, as well as an outdated cabin. We are also silent about the Ukrainian D-436T1 engines manufactured by the Motor Sich plant, the supply of which under current conditions could only have been dreaming, had the plane been born.

In principle, the fact that the Tu-334 in the serial version did not appear can be considered a great success for the country, which is far from normal with the civilian aircraft industry. What about the prospects of the "revival" of the 334th? In the spring of 2016, information appeared that aircraft manufacturers were planning to resume production of the aircraft, but upon closer examination it turned out that it was just a study of the possibility of using the Askon software product using some Tu-334 parts as an example.

That is, the project is “dead” for today, and there is no question of its revival in a new look.

Changing materials, on-board equipment, units, using new engines is like creating a completely new plane. Long, expensive. Even with deep modernization, the Tu-334 will not be able to compete with modern airliners
- recently said the executive director of the industry agency Aviaport Oleg Panteleev.

The situation is similar with the An-148, which, we recall, could once become a competitor to the Sukhoi Superjet. And there is not much to talk about here, because the plane is Ukrainian. In the current political Under the circumstances, it would be absurd, frankly speaking, to hope for a restart of the Russian-Ukrainian program. Maybe later we will analyze the once promising aircraft in more detail, but it should be said right away that it can no longer be considered as a modern short-haul narrow-body aircraft.

In general, the Sukhoi Superjet 100 is correctly assessed not even as the "first Russian airliner", but as an attempt to create the first domestic passenger aircraft competitive on the world market, in general. Problems in this way could not be avoided, so the question can also be formulated in this way: is Russia ready to finance its aircraft industry? Or maybe it's worth buying all the planes abroad ...

Be that as it may, the cause of the recent tragedy was a set of factors showing the crisis of the entire Russian airline industry. And blame for all the troubles solely the creators of the Sukhoi Superjet 100 is not worth it.
Ctrl Enter
Noticed oshЫbku Highlight text and press. Ctrl + Enter
We are
“Killer Aircraft”: the failure of the Boeing 737 Max and its consequences for Russia
MS-21 airliner: there are risks, there is no plane
Reporterin Yandex News
Read Reporterin Google News
Ad
The publication is looking for authors in the news and analytical departments. Requirements for applicants: literacy, responsibility, efficiency, inexhaustible creative energy, experience in copywriting or journalism, the ability to quickly analyze text and check facts, write concisely and interestingly on political and economic topics. The work is paid. Contact: [email protected]
37 comments
Information
Dear reader, to leave comments on the publication, you must to register.
I have an account? Sign in