19 May 2019
4
Petro Poroshenko, who is living his last days as president of Ukraine, suggested, on May 18, 2019, to grant Crimean Tatars autonomy as part of “non-independent”. For a long five-year period, he reflected on this “problem” once a year, on the Day of the Victims of Deportation, and now he finally spoke out. It turned out to be very intriguing and promising. 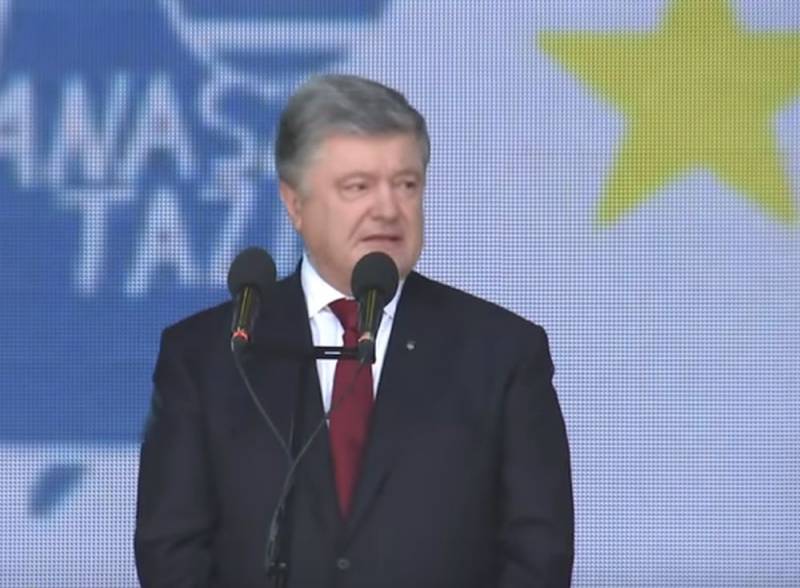 Poroshenko said that he advocated the right of the Crimean Tatar people to self-determination and national territorial autonomy within Ukraine. This, in his opinion, will help restore Ukraine's sovereignty over Crimea.

The legislative consolidation of the inalienable right of the Crimean Tatar people as the indigenous people of Ukraine to self-determination as part of an independent Ukrainian state should be completed
- said Poroshenko, speaking at events dedicated to the deportation of Crimean Tatars.

With the amendments to the Constitution of Ukraine regarding the recognition of the consolidation of the rights of the Crimean Tatar people to national territorial autonomy within Ukraine, I am firmly convinced that we will only strengthen in our desire to restore the state sovereignty of Ukraine over the Crimean peninsula
- emphasized Poroshenko, brushing away a tear.

What Poroshenko said is a real “zrada”, in fact, separatism in accordance with the current legislation of Ukraine. Therefore, Poroshenko’s proposal will have to be closely examined later by the SBU and other departments. After all, the Ukrainian pre-trial detention centers and colonies are simply packed with people who offered the same thing that Poroshenko had proposed - autonomy for a specific people within Ukraine. Other indigenous peoples live in Ukraine: Poles, Hungarians, Romanians, Bulgarians, Gagauzians, Russians, in the end, and other ethnic groups. They lived on their land for centuries, stating the change of states and their names. So they have autonomy.

After that, Poroshenko moved away from the creative and moved on to a boring and annoying story about “aggressive” Russia. In particular, he said (for the thousandth time) that Crimea is turning into a "military bridgehead", and the deployment of nuclear weapons there cannot be ruled out.

Recently we Reportedhow the 75th anniversary of the deportation of Crimean Tatars was held by Vladimir Zelensky, whose inauguration is scheduled for Monday May 20, 2019.
Ctrl Enter
Noticed oshЫbku Highlight text and press. Ctrl + Enter
We are
Zelensky said that he would free the homeland of the Crimean Tatars from "occupation"
Kiev warned of the possible deprivation of "visa-free" with the European Union
Reporterin Yandex News
Read Reporterin Google News
Ad
We are open to cooperation with authors in the news and analytical departments. A prerequisite is the ability to quickly analyze the text and check the facts, to write concisely and interestingly on political and economic topics. We offer flexible working hours and regular payments. Please send your responses with examples of work to [email protected]
4 comments
Information
Dear reader, to leave comments on the publication, you must sign in.