13 May 2019
21
American billionaire Jeff Bezos seriously intends to return the Americans to the moon. Now he introduced his new brainchild - the spaceship Blue Moon. 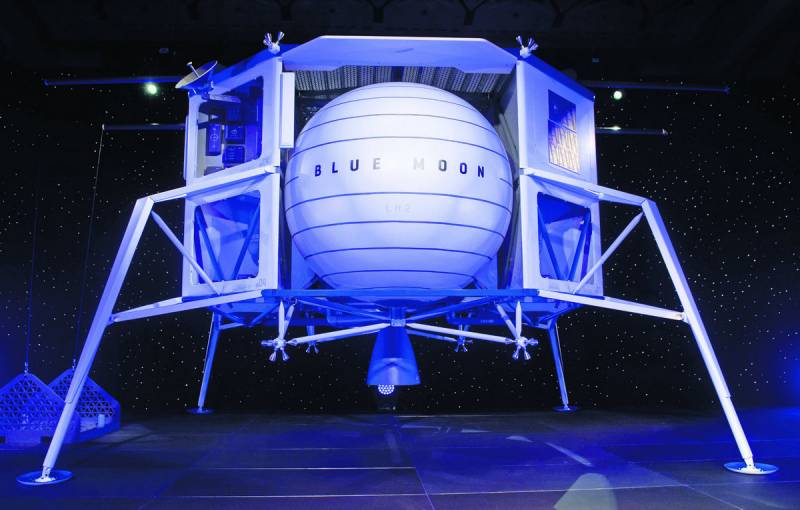 In space, no one will know about your billions

Jeff Bezos is a man of the era. No, it would be more correct to say that he is a man-era. In 1994, a little-known entrepreneur founded the online store Amazon.com, which sold books. Soon it will be possible to order audio and video products in it for every taste and color. And much more. Careful attention to competitors has led to the fact that now Amazon is the largest e-commerce market and cloud computing platform in the world. And in 2018, Forbes magazine estimated Bezos’s fortune at $ 135 billion: thus, the founder of Amazon is the richest man on the planet.

At the same time, Jeff Bezos is not alien to the romance of space flights. Back in 2000, he founded the private aerospace Blue Origin, which is now in full swing experiencing a suborbital tourist complex (reusable rocket + ship) New shepard, and in the foreseeable future, the company wants to build a heavy space rocket New glenn, which will be able to challenge the very Ilon Mask. 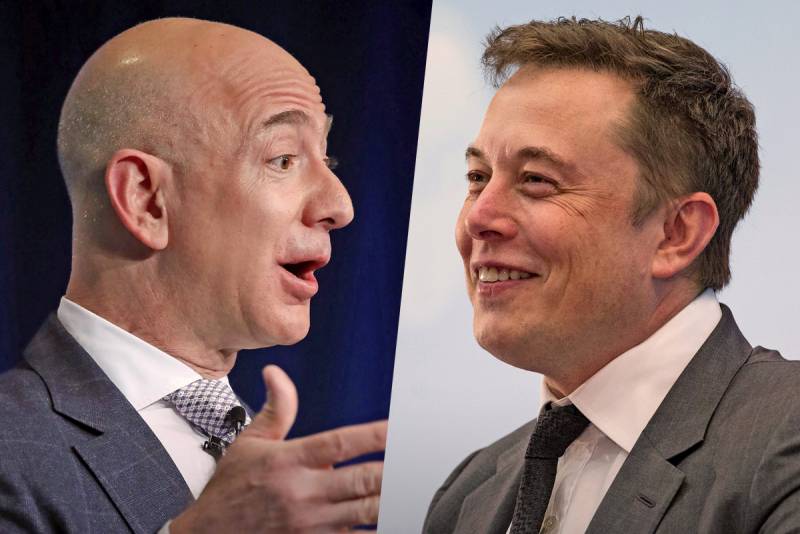 In general, the analogy with the most famous inventor of our time suggests itself. Moreover, they are not averse to “pinning” each other.

My friend who wants to go to Mars? Do me a favor: try to live on top of Everest for a start at least a year, and see if you like it. Everest is a garden of paradise compared to Mars,
- Jeff Bezos reacted to the mask's Martian ambitions.

In this case, in fact, Mask and Bezos are completely different people. And their approaches to work vary. SpaceX succeeded in a good low start, but do not discount Blue Origin. Now Ilona is compared with a hare, and Jeff Bezos - with a turtle. And as was the case with the heroes of the famous short animated film, the first may remain out of work. SpaceX companies generally often accuse excessive ambitions and senseless spending, and the desire to be the first often ends in accidents, such as in the case of the Dragon 2 ship. We recall, recently exploded during the tests.

However, let's get down to business. As we know, SpaceX focuses on Mars, where the company plans to deliver colonists on its Starship. Bezos has more modest plans, and he does not hide this. The creator of Amazon is not against flying to the Red Planet, but first wants to put all his strength to save the Earth and explore the Moon, which is incomparably closer to the distant cold Mars.

In May, Blue Origin held a press conference in Washington, sharing with the world new details of a large-scale plan for the colonization of the Moon. The main novelty was the presentation of the concept of the Moon Moon lunar landing module, which the company has been developing since 2016. A model of the device was demonstrated, which in the cargo configuration will be able to transport up to 3,6 tons of cargo to the satellite of our planet. Another option, more lifting, will be able to deliver to the moon up to 6,5 tons. Finally, the manned version will deliver astronauts, performing approximately the same function that the Apollo spacecraft once performed, on which Americans landed six times on Earth’s satellite. The “heart” of the Blue Origin concept is the innovative BE-7 jet engine, created specifically for Blue Moon. He will use liquid oxygen and hydrogen as fuel, developing thrust up to 40 kilonewtons. In the manufacture of BE-7 intend to widely use three-dimensional printing. Blue Origin intends to conduct the first fire tests this summer. 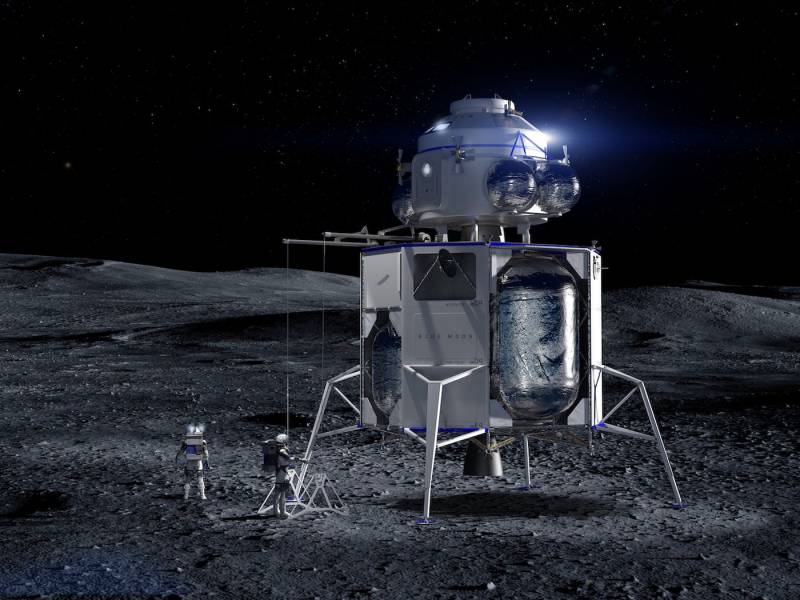 It’s worth a little distraction and recall that Bezos’s company, oddly enough, has vast experience in developing rocket engines. The company has already built and tested the revolutionary BE-4 in many respects, which they want to use for several future American missiles at once: the aforementioned New Glenn and Volcano. A distinctive feature of the engine is the use of liquefied natural gas as fuel. This, in theory, will create a reliable and relatively inexpensive to use engine, which, unambiguously, adds chances for the successful implementation of what was planned in the framework of the new Bezos project.

At the same time, both BE-7 and the entire Blue Moon complex are part of a much more ambitious plan.

We decided to use liquid hydrogen for the simple reason that, ultimately, it will be possible to extract it directly from water ice and to fill the apparatus directly on the surface of the moon. It's time to get back to the moon. This time to stay
- noted Jeff Bezos at the conference.

Journalists also drew attention to the fact that the concept of Blue Moon can also be considered in the context of Donald Trump’s intentions to return astronauts to the moon, making this a merit of the current government. Blue Origin names the year 2024 as the estimated date of the manned flight to the moon, which agrees with the plans previously announced by the White House. Back in 2017, Donald Trump signed the “Directive No. 1”, which implies the return of the United States to the satellite of our planet, and they want to do this (they didn’t say it directly, but de facto it is) due to the “reduction” of Martian ambitions, which now shifted indefinitely.

However, for the time being, it is not worth equating NASA’s “lunar” ambitions with the Blue Moon project, because the US space agency has long linked the exploration of deep space, primarily with the new superheavy rocket Space Launch System and the Orion spacecraft, which are also considering in the context of the creation of the lunar orbital station Lunar Orbital Platform-Gateway. That is, it may turn out that NASA is not on the way with either SpaceX (and its semi-fantastic ideas), or with Blue Origin (and its "Blue Moon"). Only time will tell which of these projects really deserves to become a tool for the exploration of the moon by humanity.

In this case, do not worry much about the Americans. Other countries, including Russia and China, can only dream about the opportunities that NASA or private owners have. One example: Europe still does not have its own manned spacecraft at all and it is not known when they will appear. 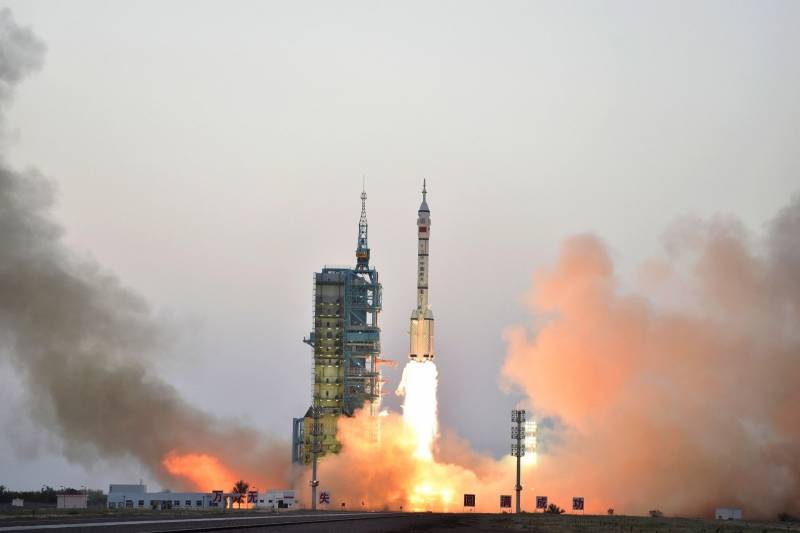 Russian experts, however, responded to the Bezos project in their own manner, by voicing plans for the distant future. Anyway, RIA News referring to an informed source the other day, it stated that the engineers of the Lavochkin NGO are considering the possibility of creating duplicates of the Luna-26 and Luna-27 research devices under the name Luna-26/1 and Luna-27/1. They may appear after 2030. In practice, we will probably have another version of the "fable" about the launch of the "Science" module or bringing the "Angara" to a working state.
Ctrl Enter
Noticed oshЫbku Highlight text and press. Ctrl + Enter
We are
The end of the "Union": the Americans did not leave Russia a chance
New Glenn Rocket: A Media That Could Crush Ilona Mask
Reporterin Yandex News
Read Reporterin Google News
21 comment
Information
Dear reader, to leave comments on the publication, you must sign in.