Ukraine without gas: what is the Kremlin doing?

April 29 2019
14
The gas issue is the cornerstone in the relationship between the Kremlin and Kiev. Due to the transit conditions of "blue fuel" to Europe, there were already two "gas wars", and a third was coming. The date of its possible offensive is known - January 1, 2020. 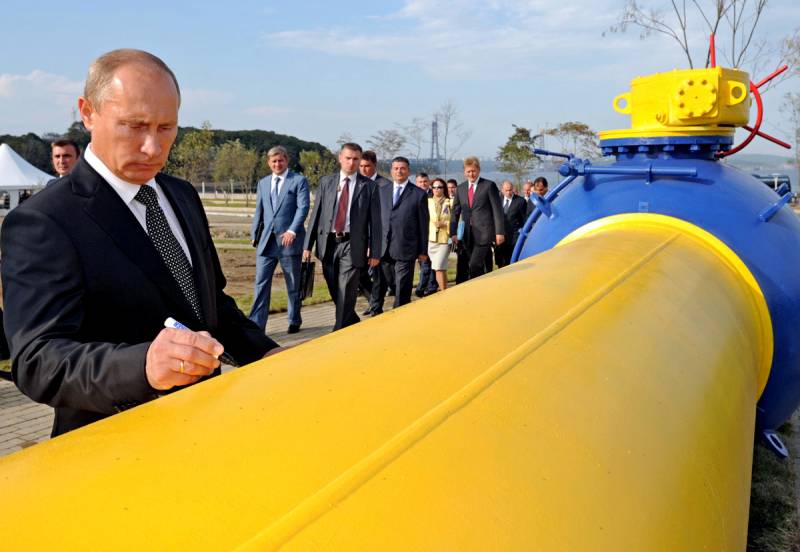 On this day, any of the parties to the expired transit agreement will be entitled to wrap the valve. The big question is, who would be worse off cutting off supplies - to the Russian budget or to Ukrainian and European consumers?

It will be hard for Gazprom, and therefore for Russian taxpayers. After the Maidan in 2014, it became clear that Kiev had lost political subjectivity and finally ceased to be negotiable. The domestic monopolist invested heavily in the construction of two bypass routes around Nezalezhnaya - Nord Stream-2 and Turkish Stream. Ideally, two pipelines could completely replace Ukrainian transit.

Unfortunately, Ankara has given the go-ahead for a gas pipeline that is half the capacity originally planned by Gazprom. Now, due to changes in European energy legislation, Nord Stream 2 may remain only half full. As a result of the actual failure to completely replace the Ukrainian direction, the Kremlin expressed its principled readiness to preserve transit through the Ukrainian gas transportation system after 2019. The only question is in the conditions.

In addition, there is another stumbling block. These are litigations between Naftogaz and Gazprom. The Stockholm arbitration sided with the Ukrainian company and awarded it $ 2,56 billion for the short supply of Russian gas. The domestic monopolist did not agree with such a statement of the question and challenged the decision of the arbitration. Despite the fact that the lawsuit continues, Kiev intends to recover the billions awarded to it in Stockholm, including by imposing a penalty on Gazprom’s foreign assets. The Russian side has repeatedly stated that in order to normalize relations, it is first necessary to resolve judicial claims. However, Naftogaz does not intend to backtrack.

Currently, the dispute is about the amount of gas that Kiev can get. Everything rests on the state of the gas transmission system itself. It is worn out and needs multibillion-dollar investments in modernization and maintenance. Naftogaz does not have that kind of money, and the Europeans, frightened by the level of Ukrainian corruption, are not ready to provide their hard-earned money for this. It remains to try to “shake” them out of Russia.

This can be done as follows: conclude a long-term agreement with Gazprom, for 10 years, and the maintenance of the dilapidated GTS will be assigned to the Russian budget. The volume of pumped gas in this case should be significant. The representative of the Ukrainian gas company Vitrenko said:

Of course, the Kremlin is not enthusiastic about these plans. The “partners” can only be encouraged to sign something like this by cutting off gas on January 1, 2020. The Russian budget is critically dependent on energy supplies to Europe. The dirty oil scandal has already hit the country's reputation and revenues. If gas supplies are also cut off, such a double blow will have the most dire consequences.

Another question is that Kiev is also at a high risk, hinting at the closure of the valve. The fact is that no “getting rid of energy dependence on Russia” in Ukraine did not happen, despite all the assurances of the Ukrainian authorities. President Putin bluntly stated:

Yes, the gas supposedly received from Europe via the reverse comes from there only on paper. In fact, it is also taken from the transit pipe. Closing the valve on the border with Russia would mean cutting off supplies to Ukrainian consumers. It is possible to hold out for some time on stocks from underground storage facilities, but this will not be enough for the normal functioning of the life of a large state. The residents of Eastern Ukraine and a number of Central regions will suffer the most.

The elected president Zelensky received great support from the population, opposing himself to Petro Poroshenko. But he can very quickly lose it if his own policy is even more adventurous than that of his predecessor. The situation is extremely serious. All parties to the conflict will suffer from the third gas war, and ordinary Ukrainians and Russians will ultimately bear its financial burden.
Ctrl Enter
Noticed oshЫbku Highlight text and press. Ctrl + Enter
We are
It's important5
The bill went for months: will Ukraine survive without Russian gas?
After a conversation with Putin, Merkel made harsh statements
Reporterin Yandex News
Read Reporterin Google News
14 comments
Information
Dear reader, to leave comments on the publication, you must to register.
I have an account? Sign in