April 18 2019
4
On April 4, Libyan field marshal Khalifa Haftar ordered his troops to free the capital of the country “from terrorists,” meaning the Government of National Accord, based in Tripoli. The cast from the desert to the coast was decisive and unexpected. The Libyan national army surrounded the city on three sides and took the suburbs. However, even today, April 18, Haftar’s troops are treading water on the spot, and Tripoli wasn’t taking it. Is it worth perceiving as the collapse of the “blitzkrieg” of the Libyan field marshal, for whom an arrest warrant has now been issued, and its strategic defeat? 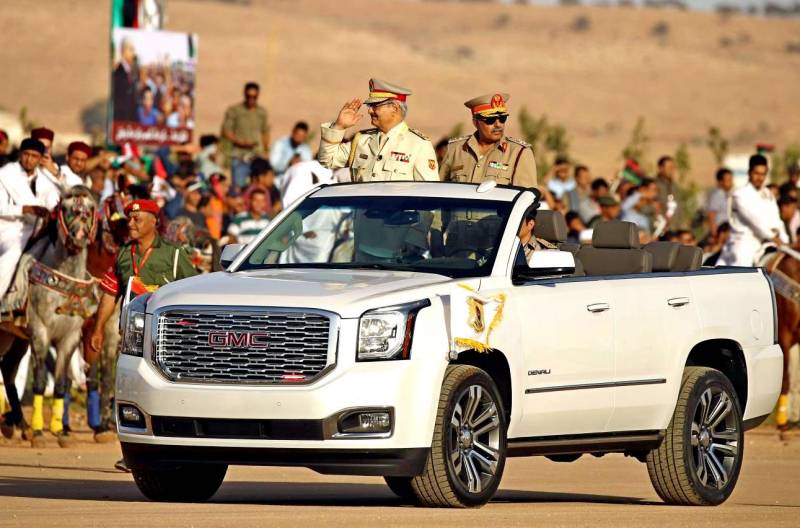 The situation around the Haftar throw on Tripoli is very confusing. Libya itself once prosperous after the aggression of NATO is a few disparate city-states controlled by various armed groups. In the west of the country in Tripoli, the so-called Government of National Accord Faiz Saraj is sitting, recognized as legitimate by the UN. In the east, the Libyan National Army, led by Khalifa Haftar, a former ally of Muammar Gaddafi, is a real force.

Since Libya today is de facto not an independent entity, but rather an external object policy foreign states, of great importance is who is behind the backs of each of the main parties to the conflict. The government of Saraj is supported by Turkey, Qatar and Italy, the former metropolis of Libya. Apparently, France, Egypt and the United Arab Emirates made a bet on Haftar. Opinions on the involvement of Paris are clearly held in Rome, Italian Prime Minister Salvini with a subtle hint of President Macron said:

Someone supports this blitzkrieg, but this is not Italy.

The British and Americans, contrary to their custom, are in no hurry to send aircraft carriers and marines to the shores of Libya, waiting for who will prevail. The Kremlin also does not take sides, maintaining contacts with both Saraj and Haftar. Honestly, almost any alignment will somehow benefit Moscow. While the war is on, the price of oil is above $ 70, reaching 72 already. If Haftar wins, there is a chance to agree with him on the return of Rosneft, Russian Railways and other domestic companies to Libya. If the field marshal loses, then, in general, Russia will not lose anything new, everything has already been lost before.

So who will prevail in the battle of Tripoli?

The government of national consent called for help from other armed groups who are fighting for their own freemen against Haftar, who has the idea of ​​uniting the country. The advance of the field marshal’s army was seriously slowed down. Aviation stood in defense of Tripoli. Why aren't Haftar’s troops using heavy machinery?

Russian political scientist Yevgeny Krutikov believes that this does not meet the plans of the one who considers himself a liberator:

It is not in Haftar's interests to enter the ruins. The fact is that he needs to gain political power in the capital, and not destroy it.

In his opinion, time already works for the Libyan national army. The city is under siege, there is no unity among its defenders. East is a delicate matter, and donkey loaded with gold can cross the highest city wall.

Apparently, the opponents of the field marshal understand the alignment. It is reported that on the eve of Tripoli was fired from the Grad system, which led to civilian casualties. Often, such incidents are used by external players to intervene in a conflict. The Libyan National Army denies any involvement:

Tonight, the Libyan army did not use heavy weapons during military operations.

It will soon become clear whether this was a provocation, and who decided to arrange it.
Ctrl Enter
Noticed oshЫbku Highlight text and press. Ctrl + Enter
We are
Should Russia support the army of Field Marshal Haftar?
Who is behind the field trip of Field Marshal Haftar to Tripoli?
Reporterin Yandex News
Read Reporterin Google News
4 comments
Information
Dear reader, to leave comments on the publication, you must sign in.