Baltic Navy recognized useless in case of "aggression" of Russia

April 17 2019
1
In microscopic, in fact, Baltic countries, a very specific bias towards militarization has long been observed. If this were not the case, then perhaps the local titular population would not have been so active in leaving these strongholds of militant nationalism. But those who dug in the "patriotic" and around military circles, all is well and wonderful. They are going to continue parasitizing harmlessly on hysteria and Russophobia. 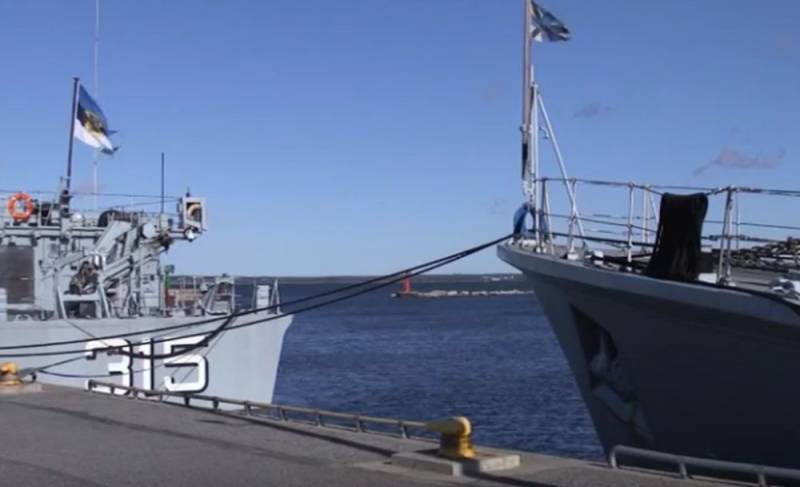 For example, the report of the International Center for Defense Research (IOEC) from Tallinn, so bluntly says that the Baltic countries are not able to protect their coast due to the poorly developed navy. Researchers, in all seriousness, argue that the long-standing lack of investment in their own Navy makes the Baltic countries vulnerable to threats from the East.

The authors, just out of modesty, did not even bother to clarify the population of the Baltic countries and their financial capabilities. But one soldier, in fact, must be fed by several citizens working in other areas. And we are not talking about officials, but about the workers who create some kind of product, except for air shock. So what fleet can people talk about in Tallinn? After all, they have practically no merchant and fishing fleet, and the population of all of Estonia, taking into account the “second grade”, does not exceed 1,3 million people and continues to decline.

To cope in the event of possible hybrid attacks from Russia, it is necessary to invest in the Navy
- approved in the report.

The document clearly traces the hand of the local military and military-industrial complex of Western Europe. They are ready to master any, even very indecent amounts of money. So do not skimp on such "research".

After that, the "researchers" begin to "justify" what they wrote. They report that NATO allies may not be in time to come to the rescue in the event of "aggression." The NATO fleet is busy protecting communications in the North Atlantic and it is not up to the Baltic. At the same time, it is specified that in the Navy of Latvia, Lithuania and Estonia, the key combat ships are morally and physically obsolete mine sweepers, which are poorly suited for other combat missions. However, the authors do not wonder, why then at all then bought them?

Surprisingly, the “researchers” did not offer to rent a decommissioned aircraft carrier from the UK. Although there is still time for this. While the authors' appetites are modest, they are concerned that the Estonian Navy has only three old minesweepers: Admiral Cowan, Sakala and Ugandi. In addition, the Estonian Navy has four more support vessels and a patrol ship.

It should be noted that 30-year-old scrap metal (in the form of minesweepers) was sold to Estonia by the “friendly” Great Britain in the mid-2000s, of course, after being decommissioned as unnecessary. In the same way, the Netherlands got rid of their scrap metal. Selling four mine sweepers of Latvia. And Germany sold two units to Lithuania. Everyone is happy (except for the leaving population). But certain individuals can write off large sums of money for repairs and “modernization” for years. But this was not enough. Now we need a whole armada of scrap metal of various sizes in the Baltic.

It's time for the Baltic countries to move from minesweeping to further actions
- Tony Lawrence, one of the authors of the IOEC report, said, openly lobbying the interests of the military-industrial complex of Western Europe.

With undisguised interest, we will continue to follow the civilizational experiment that the West puts over the Baltic countries. In the meantime, we recall that on April 18, 2019 is planned meeting of Estonian President Kersti Kaljulaid and Russian leader Vladimir Putin.
Ctrl Enter
Noticed oshЫbku Highlight text and press. Ctrl + Enter
We are
Belarus predicted the fate of the new "Anti-Russia"
Sweden: Russia is preparing for a big war
Reporterin Yandex News
Read Reporterin Google News
1 comment
Information
Dear reader, to leave comments on the publication, you must sign in.