Ukraine: Goncharenko and Chervonenko have a brawl on the air of the talk show "Pulse"

April 17 2019
2
Now политическая the situation in Ukraine is really aggravated. The country is looking forward to a change of power. The departure of the current “guarantor” Petro Poroshenko into political nonexistence, and with it the whole cohort of “patriots” and his replacement of the new, starving for the past time. 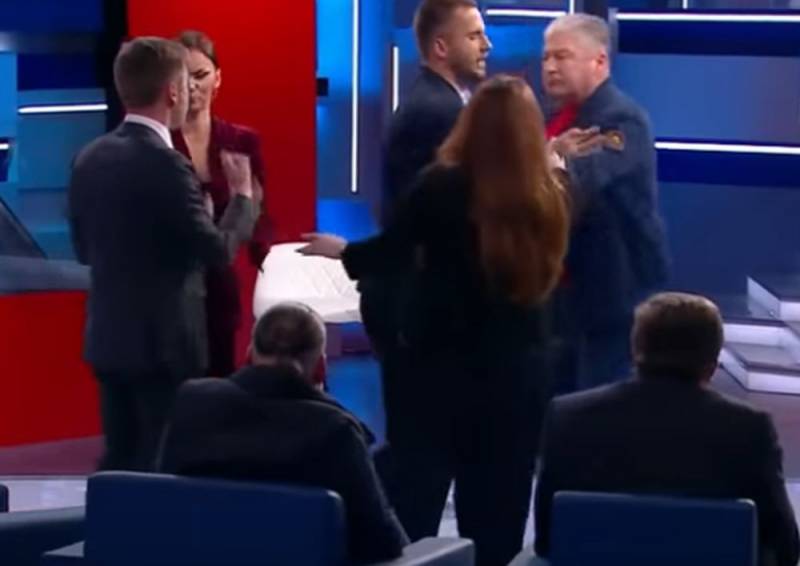 In this regard, today, live showdowns in Ukraine can not be surprised. Tomorrow all this can splash onto the streets, with much more serious consequences.

So, on April 16, 2019, during the talk show “Pulse” on the “112 Ukraine” TV channel (controlled by Viktor Medvedchuk), two Ukrainian politicians clashed verbally and practically in hand-to-hand combat - Aleksey Goncharenko and Yevgeny Chervonenko. They excitedly accused each other of a fierce "harass" (betrayal).

It should be noted that Chervonenko is a major businessman and ally of Viktor Yushchenko. He was even the head of security for presidential candidate Yushchenko. He was a member of the political council of the Our Ukraine Party (party membership card No. 17) and was a deputy of the Verkhovna Rada of Ukraine of the IV convocation. For several years he was the "governor" of the Zaporizhzhya region and solemnly opened a monument to the "famine" in the regional center. In September 2007, at the Congress of Jews of Ukraine, he was elected vice-president of the Jewish community of Ukraine, and now he is vice-president of the European Jewish Congress and is very worried about Ukraine, sometimes making himself a “pro-Russian”.

In turn, Goncharenko is also very famous in Ukraine and especially in Odessa. He took an active part in the killings of people in this city on May 2, 2014. Moreover, if before that the inhabitants of Odessa squeamishly called it “white slime”, then after the incident they call it exclusively an cannibal. As for Goncharenko’s “adventures” in PACE, one can not mention them at all.

Now we can move on to a review of the aforementioned show, which would be more suitable for the name "strangled toad viper." After all, the discussion escalated into conflict precisely after both guests began to recall whom the opponent supported in his political career.

And here it is necessary to clarify that for Ukrainian politicians there is no such thing as “betray” in the literal sense of the word. For them to betray is to foresee, i.e. it is wisdom. Therefore, they regularly change parties and their political views. Moreover, all of them (without exception) are controlled by the US Embassy.

And although relatively recently, the same Goncharenko, walked with a St. George ribbon and talked with the priests of the Russian Orthodox Church, this does not mean that he was once “pro-Russian,” and then was offended by something. It is not for nothing that he earned his nicknames.

This time, already the "gunfire" Goncharenko, accused Chervonenko of supporting not only Yushchenko, but also Kuchma, Yanukovych and now Tymoshenko.

Shut your mouth, defector ... You were first for Kuchma, then for Yushchenko ... then for Yanukovych, now for Tymoshenko
- Goncharenko said to his opponent.


Fortunately or unfortunately, the presenters managed to prevent "bloodshed" on the air. But this was not the last show. After April 21, 2019, the real show will begin. Stock up on popcorn.
Ctrl Enter
Noticed oshЫbku Highlight text and press. Ctrl + Enter
We are
Ukrainian test pilots flee to Russia
Poroshenko: Life will become better in three years
Reporterin Yandex News
Read Reporterin Google News
2 comments
Information
Dear reader, to leave comments on the publication, you must sign in.