April 10 2019
2
Astronomers from the European Southern Observatory for the first time presented for public viewing photographs of the event horizon of the black hole, which is located in the center of the M87 galaxy. 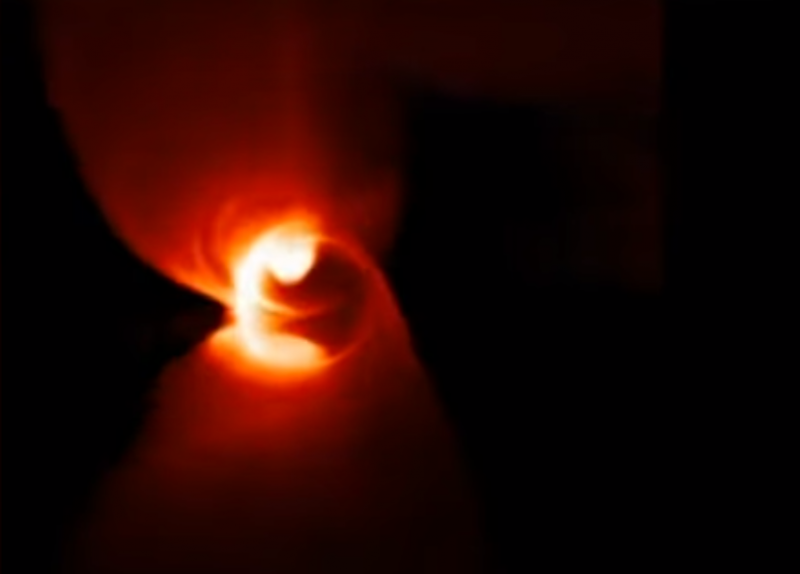 At a press conference of the European Commission and the European Research Council, scientists talked about what work they managed to do with the Event Horizon Telescope's global network of telescopes. So, astronomers managed to get an image of the “shadow” of a black hole. This is a dark area against the background of visible radiation, which corresponds to the event horizon. The distance of the studied object is 53 million light years from Earth.

The black hole, previously considered invisible, in fact, as we see in the photo, resembles a flaming orange and yellow-black ring. Some astronomers hastened to draw parallels even with fantastic works. So, Jessica Dempsey from the East Asian Observatory in Hawaii compared the black hole with the Eye of Sauron from the works of John Tolkien.

In addition to the “shadow” of the black hole, astronomers also tried to photograph the compact radio source Sagittarius A *, which is located in the center of the Milky Way and is also a black hole. The mass of the black hole is four million times greater than the mass of the Sun, and in size it exceeds the Sun by eighteen times.

The image of the black hole was so large that it could not be sent by e-mail and sent from the observatory to the processing center using hard drives. Processing the amount of information received took two years.

Recall that the Event Horizon Telescope combines eight observatories in different parts of the globe, which function as one telescope with a diameter of 10 thousand kilometers. Thanks to this, the resulting images have high resolution and high detail.
Ctrl Enter
Noticed oshЫbku Highlight text and press. Ctrl + Enter
We are
Viktor Yanukovych moved from the Rostov region to another region
EU accused Russia of "illegal export" of cultural property from Crimea
Reporterin Yandex News
Read Reporterin Google News
Ad
The publication is looking for authors in the news and analytical departments. Requirements for applicants: literacy, responsibility, efficiency, inexhaustible creative energy, experience in copywriting or journalism, the ability to quickly analyze text and check facts, write concisely and interestingly on political and economic topics. The work is paid. Contact: [email protected]
2 comments
Information
Dear reader, to leave comments on the publication, you must to register.
I have an account? Sign in