The world is preparing hard to abandon SWIFT

April 8 2019
13
The United States of America continues to gradually give up its position as the sole superpower. The danger loomed over the international cross-border payment and transfer platform SWIFT, based on the use of the dollar. Leading economic Powers are preparing alternative systems and are no longer afraid of the US threat of disconnecting from SWIFT. 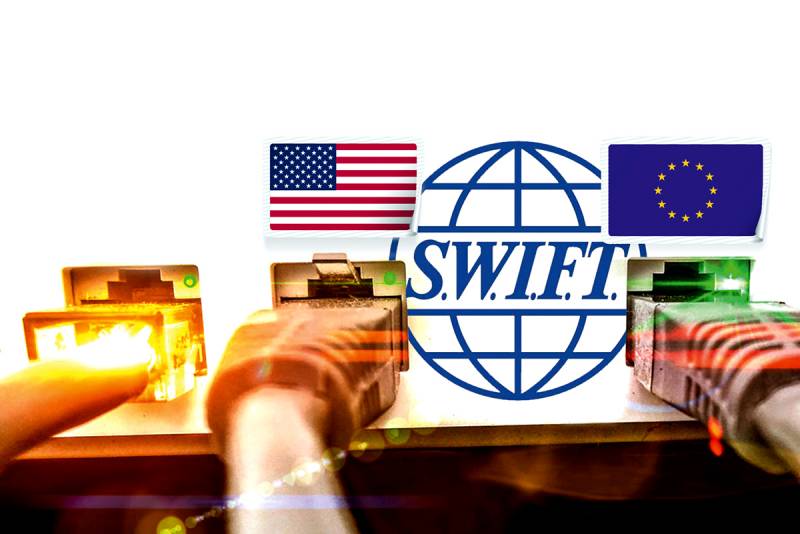 Formally, SWIFT is a European organization registered in Belgium. But since 2011, the “Belgian cooperative” has been under the hood of Uncle Sam, who is very curious to look into other people's wallets. Earlier, Iran was disconnected from the SWIFT system as part of the international isolation program. They started talking about similar measures in relation to the Russian Federation after the events of 2014. Apparently, such prospects did not inspire Beijing at all, and in Brussels no one is delighted with the annoying “guardianship” of the United States.

In 2008, a single Euro Payments Area (SEPA) was created in Europe. This system in the conditions of the financial crisis was designed to provide savings when moving capital in the European economy. SEPA was not able to completely replace SWIFT, but it became an additional tool for economic security of the European Union from its “overseas cousin”. Actually, at the moment, Europeans are working hard on yet another system of international payments, which is designed to completely eliminate dependence on SWIFT.

In Russia, the development of a domestic analogue of SWIFT began already in 2014 due to the threat of disconnecting banks from a US-controlled financial instrument. It is called the financial messaging system (SPFS). In 2017, the head of the Central Bank Elvira Nabiullina said that SPFS is ready to ensure the reliable functioning of the Russian financial system in the event of new American sanctions. More and more customers in our country are connecting to SPFS, one of its advantages is the lower cost of service than in the western counterpart.

But that is not all. In 2015, China launched its own counterpart to SWIFT called the Chinese International Payment System (CIPS). It is believed that this is the most serious competitor to the Western system. So far, its scale is not comparable: for example, last year through CIPS transactions worth $ 13 billion were carried out per day, and through SWIFT - by 6 trillion. But Beijing has a huge trade account surplus, unlike the United States, and has allocated an unlimited limit to its own payment system. The Chinese have provided their customers with direct access to finance around the clock.

The result was not long in coming: importers of Chinese goods began to purchase them through CIPS per yuan even with a liquidity shortage. It turned out to be so beneficial that China’s eternal rival, Japan, joined the system. They are also trying to keep up with them in Russia. The representative of the Central Bank of the Russian Federation said:

A number of (Russian) banks are already connected to CIPS, which simplifies the routing of payments.

So far, the Chinese analogue of SWIFT takes into account the yuan peg to the dollar, but in the future this can be abandoned, for example, in favor of the gold equivalent. Then the situation with the American currency will not be very good.
Ctrl Enter
Noticed oshЫbku Highlight text and press. Ctrl + Enter
We are
Western SWIFT is no longer needed by Russia
Russia - to the West: You can disable your SWIFT
Reporterin Yandex News
Read Reporterin Google News
Ad
We are open to cooperation with authors in the news and analytical departments. A prerequisite is the ability to quickly analyze the text and check the facts, to write concisely and interestingly on political and economic topics. We offer flexible working hours and regular payments. Please send your responses with examples of work to [email protected]
13 comments
Information
Dear reader, to leave comments on the publication, you must sign in.