April 6 2019
7
The light military transport aircraft Il-112V, whose project was dusting on a shelf for two decades, did not suit the Russian Ministry of Defense. The test flight of the transporter took place in late March, a lot of good words were said. However, military experts revealed so many problems in it that it cost posts to Alexei Rogozin at the United Aircraft Corporation and the Ilyushin Aircraft Complex. So what did the selection committee discover that it “brought down” the deputy prime minister’s son? 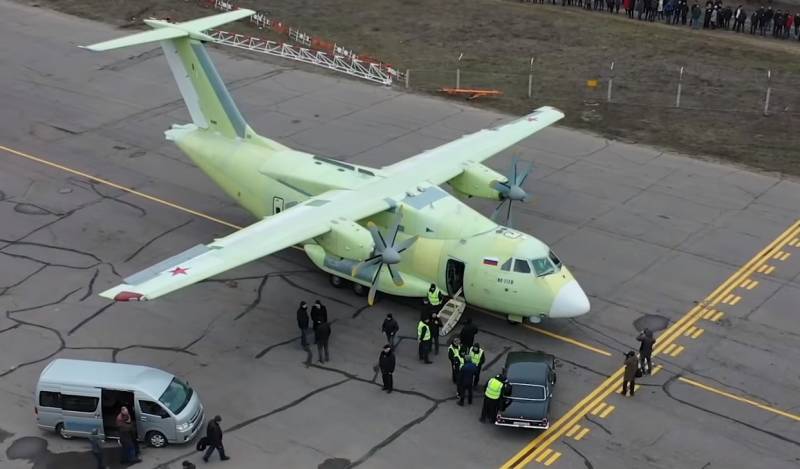 The Il-112V should replace the obsolete An-26 in the Russian Military Transport Aviation, the supply of components for which was prohibited by the Ukrainian authorities. Domestic aircraft could have been created two decades ago, but for various reasons, this project was put off the table, about which we told earlier. As a result, the "new old" transporter was created with great difficulties and delays in time. The experience of developing an airplane with our own efforts “from scratch” showed that we “got a little bit of a nuisance” to do this.

So what did the customer want?

The Russian Defense Ministry needs a transport aircraft that can take off and land at all types of airfields, reliable and safe, whose flight range will be 2400 kilometers with a load of 3,5 tons, and 1200 for a loaded one. In the new transporter, in comparison with the An-26, there is an increased cargo compartment, and the new engine should give fuel savings of 2,4 times greater. In addition, the Il-112V is additionally equipped with a ramp, convenient for parachuting and landing. equipment, and the defense complex "Vitebsk", designed to protect against enemy homing missiles.

All this is wonderful, but it turned out that despite the use of modern materials, the plane turned out to be too heavy. This was acknowledged even by Nikolai Talikov, chief designer of IL. But that's not all, the developers managed to disrupt the weight distribution at the center of gravity of the aircraft, making the bow easier. Now, to restore balance, it will have to be heavier. Why are not considered options for facilitating the tail, it is not entirely clear.

As a result, the transporter does not meet the technical specifications of the Ministry of Defense of the Russian Federation. Not even about 5,5 tons of payload is out of the question, it is good if he can handle 3,5 tons. Some pessimists even say that in its current form, the Il-112V will hardly lift a ton of cargo.

It will take at least a year to resolve the problems identified. Why did this happen? In fairness, we note that "airborne diseases" occur in all aircraft in Russia and abroad. What are the latest problems of the Boeing?

Disturbing another. The mentioned chief designer of Il Talikov explained such a slurred result by the fact that the new generation of designers turned out to be “weak”. And this is not a matter of “childhood illnesses” of a particular aircraft, but the training system in the country as a whole.

IL-112V is the first military transporter independently developed in the Russian Federation. And he demonstrated that our design school has weakened. It’s not for you to assemble constructors from imported components, such as the Superjet.
Ctrl Enter
Noticed oshЫbku Highlight text and press. Ctrl + Enter
We are
IL-114: the most “popular” aircraft will change air travel in Russia
What will Russia do when the ISS does not
Reporterin Yandex News
Read Reporterin Google News
Ad
We are open to cooperation with authors in the news and analytical departments. A prerequisite is the ability to quickly analyze the text and check the facts, to write concisely and interestingly on political and economic topics. We offer flexible working hours and regular payments. Please send your responses with examples of work to [email protected]
7 comments
Information
Dear reader, to leave comments on the publication, you must sign in.