April 1 2019
0
A joint project of ESA and Roskosmos called ExoMars, whose goal is to search for a possible life in our “red neighbor”, enters the finish line. The first phase of the program was implemented in 2016, when the Trace Gas Orbiter module successfully entered the Martian orbit. In 2017, it was possible to get the first pictures from the device. And now, preparations are in full swing for the second stage, within the framework of which the rosalind rover and the Kazachok landing platform will be sent to the Red Planet. The launch is scheduled for the summer of 2020. 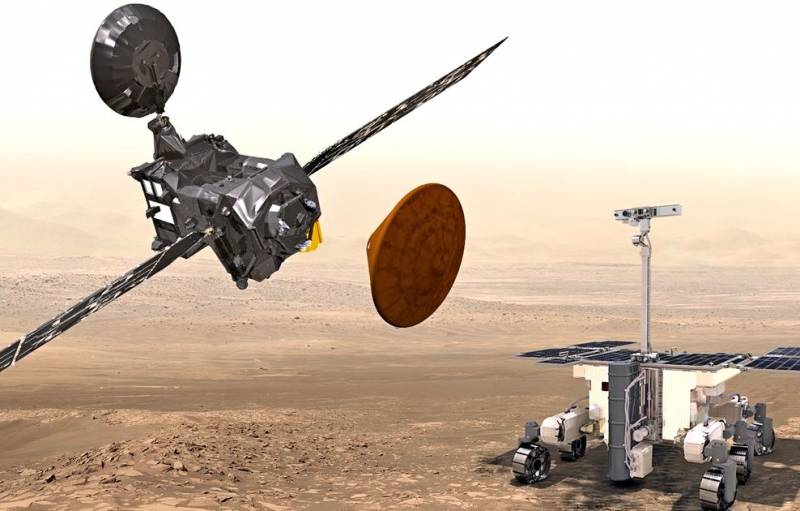 The device "Cossack", developed by NPO them. Lavochkina, currently understaffed with new tools and is preparing for testing in the Italian city of Turin. Later, the landing platform will be connected to the Rosalind rover. The latter is equipped with a panoramic camera system, a drill and other research equipment.

According to the plan of Roscosmos and the European Space Agency, the Kazachok landing platform will provide a soft landing for the rover, which will first drill a two-meter hole in the surface of the Red Planet and take soil samples. After that, the rover will be able to move around, collecting the necessary data, and the landing platform will continue to conduct research at the landing site.


As mentioned above, the goal of the ExoMars mission is to seek life on the Red Planet. Scientists hope that in the course of research they will be able to find organics, which once could long ago have reached Earth. And this, in turn, will allow you to take a fresh look at the history of the origin of all life on our planet.
Ctrl Enter
Noticed oshЫbku Highlight text and press. Ctrl + Enter
We are
The first drilling rig appeared on Mars
Russia is preparing a unique "space parachute"
Reporterin Yandex News
Read Reporterin Google News
Ad
We are open to cooperation with authors in the news and analytical departments. A prerequisite is the ability to quickly analyze the text and check the facts, to write concisely and interestingly on political and economic topics. We offer flexible working hours and regular payments. Please send your responses with examples of work to [email protected]
Information
Dear reader, to leave comments on the publication, you must sign in.