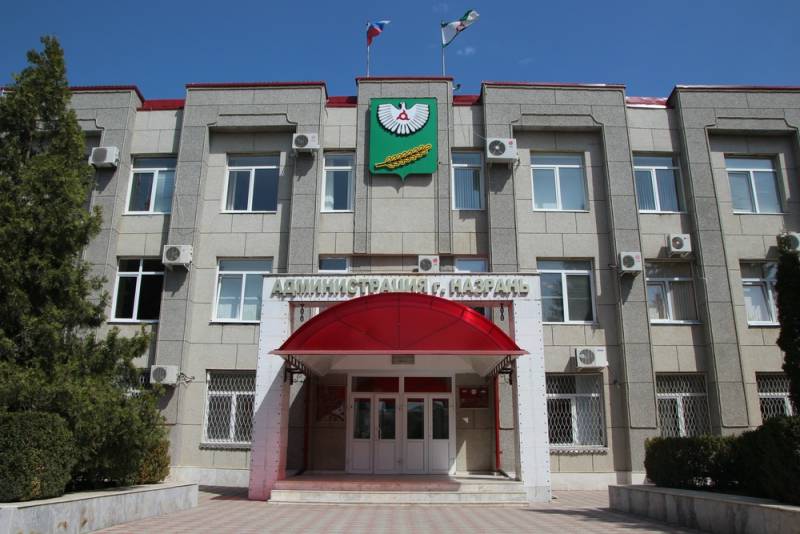 Having arranged a shootout at City Hall, the attackers fled. Now the Ingushetian police are engaged in their searches.

As a result of the shooting, three injured people were injured. Among the victims - the son of the mayor of Nazran Alikhan Tumgoyev and the guard of the mayor. However, the injuries of the victims are small.

As one of the versions of the brawl at the city hall, the conflict is considered, which occurred on the afternoon of March 28 near the central mosque of the city, during a meeting of the leaders of the spontaneous rally of the opposition with their supporters. Allegedly, the mayor of Nazran Alikhan Tumgoyev was the initiator of the conflict.

The day before the conflict, on March 27, the Kavkaz highway was blocked by the opposition. They demanded recall from consideration of the draft law “On the referendum in the Republic of Ingushetia”. The protest rally ended with the participants throwing stones at the Russian Guard officers.

However, the press secretary of the President of Russia Dmitry Peskov said that it is not necessary to connect the incident at the city hall with the opposition protests taking place in Ingushetia.
Ctrl Enter
Noticed oshЫbku Highlight text and press. Ctrl + Enter
We are
"Fairytale" Bali: two Russians killed in the attack on the "exchanger"
Why do oil workers complain about Rosguard
Reporterin Yandex News
Read Reporterin Google News
Ad
We are open to cooperation with authors in the news and analytical departments. A prerequisite is the ability to quickly analyze the text and check the facts, to write concisely and interestingly on political and economic topics. We offer flexible working hours and regular payments. Please send your responses with examples of work to [email protected]
Information
Dear reader, to leave comments on the publication, you must sign in.