What will Russia do when the ISS does not

March 28 2018
3
The other day, the Chinese station "Tiangong" will fall to Earth. Out of 8 tons of mass, less than half can reach the ground. Of course, in a very ruined form. However, the press on this occasion raised a sensation that the station could fall in one of the regions of Russia. And all this is written without knowledge of the topic, without knowledge of physics and demonstrating the absence of common sense. This is called illiteracy and blatant lack of professionalism. 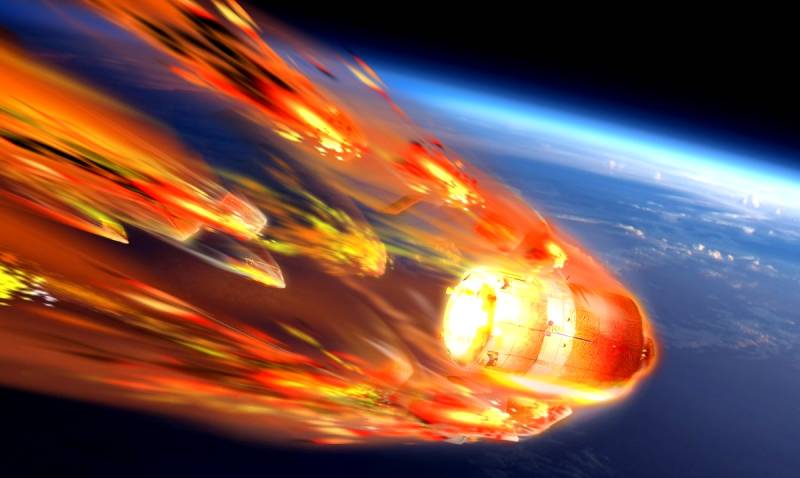 However, for publications on the subject of space such an approach is more likely a rule than an exception. On the other hand, I’m even glad that they write so badly. I have a desire to overcome my laziness and write instead of these losers.

The fact is that the very first Chinese orbital station is about to fall. She long ago worked out her resource. And completed all the tasks for which it was created. Moreover, the second station, which was created as a backup, was also launched a long time ago, worked out the program and will also fall in a few years. In fact, it seems that the Chinese manned research program is being done with some excessive reliability. There are many facts confirming this. The presence of a third station of the same kind, which, for reasons of economy, it was decided not to run at all, cuts the mind.

The next Chinese station will be modular. Like all Chinese cosmonautics, it was clearly created under the influence of Soviet stations, especially the last of them, Mir. Up to the fact that the mass of the blocks - 22 tons, is similar to the Soviet blocks launched with the help of the Proton rocket. Nevertheless, this is still the development of ideas. In addition to the base unit and two auxiliary units, it is assumed that there is a third unit that will fly in the same orbit. But on their own. And dock to the station for refueling and maintenance. Maybe this is not a big step in the development of the principles of manned space exploration. But the main thing is that this is a step in the right direction.

Moreover, this block is conceived as astronomical. Summoned to surpass the notorious American Hubble, no less. That is, in the future, the Chinese will surpass everyone in basic research. Someday this will lead to the fact that basic science will offer something for practice. That is, now the Chinese Communists are laying the foundation for the long term. For which they respect and respect!

Well, now a little conspiracy theories. Four years ago, a message flashed about the possible launch of a purely Russian high-orbit station. Since childhood, I had to be in the "Star", some of the connections have survived to this day. However, my main sources of information are not at all there. So, I was confused by some "inconsistencies" in information from various sources. What I, in fact, voiced in the above articles. And now I have additional information that can be combined in the framework of a more or less consistent version.

The fact is that the treaty on the International Space Station is about to expire. After its completion, the fate of individual ISS blocks is not obvious. In general, without the Russian bloc, it cannot fully exist. Theoretically, the option of undocking the base unit and other Russian modules is possible. And the creation on their basis of a purely Russian station. Actually, this option is the main, most simple and probable in case the contract is not renewed. There is an option that it will be extended. Then, in principle, nothing will change.

However, relations with the Wild West are currently far from cloudless. and it is absolutely possible that they will deteriorate so much that they begin to interfere with the full use of the station. Moreover, Soviet orbital stations conducted far from only fundamental and applied research. Part of the activity was of defense importance. Engaged in military research on the ISS, in principle, is not always possible. And there are serious suspicions that the high-latitude station was conceived as a military one. However, using old ISS blocks for a high-latitude station is quite difficult. The fact is that changing the orbit plane requires the consumption of very large volumes of fuel. Depending on the height of the orbit and the desired change in the angle of inclination, on average, they are comparable with the amount of fuel to remove such a block from the Earth.

Four years ago, I expressed the only version in which fuel consumption did not matter. This is if Russia would create an interorbital tug with a nuclear power plant. Which, by the way, is quite possible. Such works were carried out. And Putin’s March statement on cruise missiles and torpedoes with nuclear power plants on a related topic. Research can be carried out within the framework of a common topic, covering some studies with others. And using the backlog, equipment and specialists in several topics. By the way, the presence of a MOB with a nuclear power plant is the only option for a quick flight to the same Mars.

But if there is no interorbital tug yet? Then it’s easier to launch a new base unit. Given the fact that the old does not have much time to live, this will make sense. Moreover, the older the unit, the more time the crew spends on repairs. This trend was observed very clearly in long-term operating systems, starting from Salyutov 6 and 7, then Mir and the ISS. This is both natural and understandable. However, a high-latitude station, allowing you to see most of the Earth’s surface, is more expensive to operate. One and the same carrier brings to the equatorial and polar orbits very different mass objects. And if you use the old Soyuz to visit the high-latitude station, it would make sense to remove the third crew member. Otherwise, the payload and reserve in case of unforeseen accidents catastrophically fall.

But Russia does not have a free base unit at the moment! Creating blocks is the task of several years. And it requires the cooperation of enterprises throughout the country. Part of the equipment is generally imported. And here the third body of the Chinese OS pops up. Which, for reasons of economy, was not launched. There are suspicions that all of these four-year-old movements are related to the leakage of information on sounding the soil about wider cooperation with China in manned space exploration. Especially, regarding the Orbital Stations. Let me remind you those who are not in the know. Our western "partners" insisted precisely on the flooding of the Mir station. even the opportunity to transfer part of the unique equipment from Mira to the ISS was not given. But part of the equipment on Mir was transported from the previous Salyut-7 station! That is, the idea is not new, and there was experience in its implementation. The Chinese then generally offered the "World" or buy or rent. No, we refused money, and went against our national interests, taking the lead from the Wild West.

But there were a lot of options for fruitful cooperation even then. It was possible to begin with "practice on cats." I mean, launch the third building of Tiangong into the notorious high-latitude orbit. Not so much even to learn about mineral deposits, such as missile mines and command bunkers, but to get real experience of interaction between representatives of countries with very different cultures. In general, if something went wrong, there was always the opportunity to say that "not really wanted to." Anyway, the third building never flew. Although the costs of its creation were incurred. In fact, the price of the issue is the price of one launch of the launch vehicle.

The high-latitude station made sense not to be constantly operating, but to be visited. The next crew arrived, made repairs and maintenance of the systems, conducted very scientific experiments on the territory of potential “partners” and returned home. In addition, there is still no alternative to cooperation with the Chinese. On March 26, sales of oil futures for the yuan started. With the ability to convert to gold. This makes the future of petrodollar far from cloudless. And in the future - and not necessary. Hence, in the future, the United States will not be able to make a significant part of its expenses simply by printing unsecured dollars. So in the distant future, US spending on space expects a significant sequestration. This means that it is necessary to probe the soil for the use of the Russian ISS blocks together with China. And about the participation in the project of the Chinese Modular Station. Here the parties have something to offer each other.

There are many ways to cooperate with China. You can be partners. And if not, it will turn out as always. Quotes from Wiki:

“The Shenzhou spacecraft is largely repeating the Russian Soyuz spacecraft. “Shenzhou” has exactly the same layout of the modules as “Soyuz” - the instrument-and-aggregate compartment, the lander and the household compartment. Shenzhou is about the same size as the Union. The entire structure of the ship and all its systems are approximately identical (taking into account the conversion to the standards applicable in the PRC) of the Soviet spacecraft of the Soyuz series, and the orbital module is built using of technologiesused in the Salyut series of Soviet space stations

In 2005, the director of TsNIIMash-Export CJSC Igor Reshetin and four employees of the same ZAO were arrested on suspicion of spying for China and the transfer of space technology. In 2007, Academician Reshetin was sentenced to 11,5 years in a maximum security prison. The Chinese government requests the release of Igor Reshetin and the four workers who were arrested and sentenced to 11 years in prison in Russia and requests that they be transferred to their custody in China

That is, in the first case, the Russian Federation receives a lot of useful opportunities. In the second - only legal costs and the need to feed prisoners for decades. Receiving dollars for their obsequiousness to the Wild West, they are trying in every possible way to push sticks in the wheels of cooperation with China. Just think about what will happen when the same dollar turns into cut paper? So, I repeat, there is no alternative to cooperation with China from the word “completely”. And we must deal with this issue seriously and as early as possible. Otherwise, it would be a betrayal of the national interests of the Russian Federation, for the sake of the opportunity to bend once again before the Wild West, which is rapidly losing its influence and significance. To join the one who, due to the construction of the Great Silk Road, still loses, not even as much as betrayal, but as a mistake.

These are the things here!
Ctrl Enter
Noticed oshЫbku Highlight text and press. Ctrl + Enter
We are
US forces Russia to abandon ISS in favor of its project
The US is trying to bend Russia under itself in a grand project
Reporterin Yandex News
Read Reporterin Google News
Ad
The publication is looking for authors in the news and analytical departments. Requirements for applicants: literacy, responsibility, efficiency, inexhaustible creative energy, experience in copywriting or journalism, the ability to quickly analyze text and check facts, write concisely and interestingly on political and economic topics. The work is paid. Contact: [email protected]
3 comments
Information
Dear reader, to leave comments on the publication, you must to register.
I have an account? Sign in