“Killer Aircraft”: the failure of the Boeing 737 Max and its consequences for Russia

March 23 2019
2
Recent ones news more reminiscent of references to aircraft accidents that were at the dawn of jet aviation. 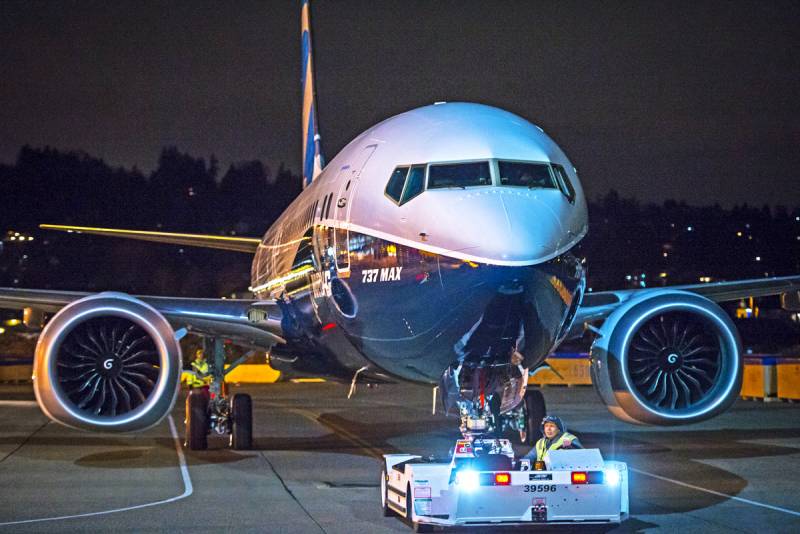 Modern airliners have almost fantastic reliability: the fear of flights is already perceived not only as a phobia, but also as complete ignorance of the essence of the matter. This has not always been the case. Gazeta.ru, which recently published interesting material about a new catastrophe, recalled the Soviet Tu-104. As you know, in the 50s the USSR tried to catch up and overtake the capitalist world: sometimes it even worked out. However, the new Tu-104 passenger plane became a real curse: of the 200 aircraft built, nearly 40 crashed, and in total, 1137 passengers and crew members died in accidents involving the airliner. It feels like we were talking about military losses in the war, but the thing is that the plane had a lot of conceptual flaws. Aeroflot abandoned it in 1979.

Of course, the “glory” of one of the first-born passenger jet aircraft does not threaten the new Boeing 737 MAX: all the more so since the entire 737 family has a fantastic ten (!) Thousand aircraft already built. They have been in excellent operation around the world since 1968. Boeing was justly among the most reliable passenger aircraft. Until this day.

What exactly happened in the sky over Ethiopia on March 2019, 149 is still not known. And it’s not a fact that we will someday be able to pinpoint the cause of the tragedy. Only the sad result is known: the crashed plane took 2017 passengers and eight crew members into the afterlife. This, as many experts rightly point out, is a very “strange" disaster. The fact is that the Boeing 737 MAX, which was put into operation only in 29, had already managed to get into another, no less terrible accident. More recently, on October 2018, 737, a Boeing 8 MAX crash occurred near Jakarta, the capital of Indonesia. The data has been decrypted. It turned out that the crew prevented lowering of the nose of the aircraft more than twenty times, caused by the new automatic system MCAS (maneuvering characteristics augmentation system), which became know-how specifically for the models MAX 9 and MAX XNUMX. This system is designed to help pilots “steer” the aircraft by adjusting its position in in the air. It was assumed that MCAS will be needed due to an increase in engine thrust on new machines, as well as a change in engine position in the aircraft structure. However, obviously, the system did not work correctly, as it was guided by incorrect sensor readings. There is nothing you can do about it: she, as they say, simply does not turn off. But it is not all that bad. At least at first glance.

MCAS comes into operation only in manual control mode and only with retracted wing mechanization. If the angle of attack sensor determines that the aircraft is in the designated area, MCAS begins to shift the stabilizer to dive at a speed of 0.27 degrees per second, that is, create a tendency to lower the nose of the aircraft, moving the airliner away from dangerous angles of attack in case of disproportional operation by the helm
- wrote in his new article pilot Denis Okan, working as a Boeing 737 commander. 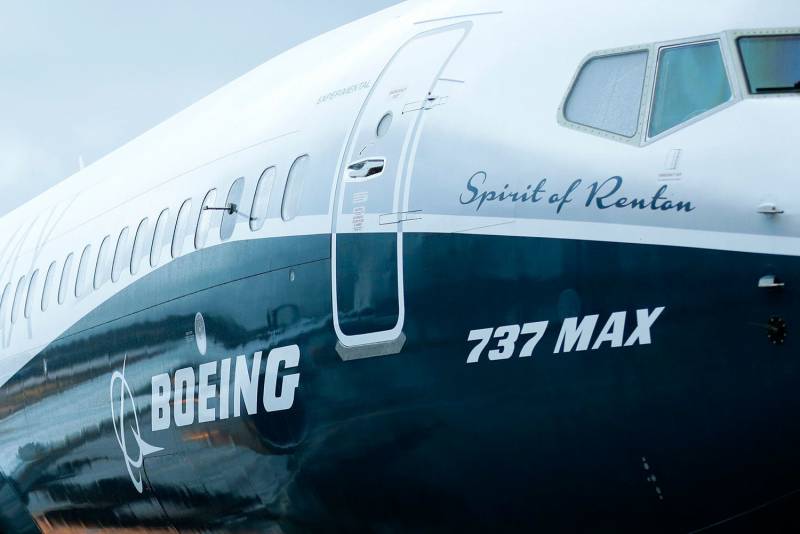 The latest disaster involving 737 Max occurred in very similar circumstances. The plane was obviously operational, and the accident occurred shortly after take-off. At the same time, the pilots reported problems, clearly realized the impossibility of controlling the aircraft in normal mode, and tried to return back. Later it will become known that the plane then sharply lost altitude, then again soared into the sky. In a minute, the fluctuations reached almost 500 meters, which, in general, is not so bad. With one “but”: if the flight is controlled and if the car is at high altitude, and not just just soared into the sky. According to the pilots, the airliner most likely automatically “dived” down, while the pilots tried to lift its nose.

And the plane flew abnormally fast.

The fact is that the most incomprehensible is its speed. The speed is very high. The question is why? The plane accelerated much faster than it should
Says John Cox, a former Boeing 737 pilot.

This acceleration can be explained by only one: the car dived uncontrollably. And experienced (and not even experienced) pilots were well aware that this should not be so. All this will allow us to state with great confidence that the cause of the disaster is not the human factor, but the MCAS system.

On March 15, new evidence of system guilt appeared. Reuters wrote that among the wreckage, there was a part of the stabilizer, indicating that at the time of the crash, the stabilizer was in a position that caused the nose of the aircraft to go down. Perhaps a strange feature, as for an airplane that is about to touch the ground (despite the fact that the pilots obviously clearly saw the danger).

In general, the answer to the question “who is to blame” seems to be found. Now you have to answer the question "what to do." 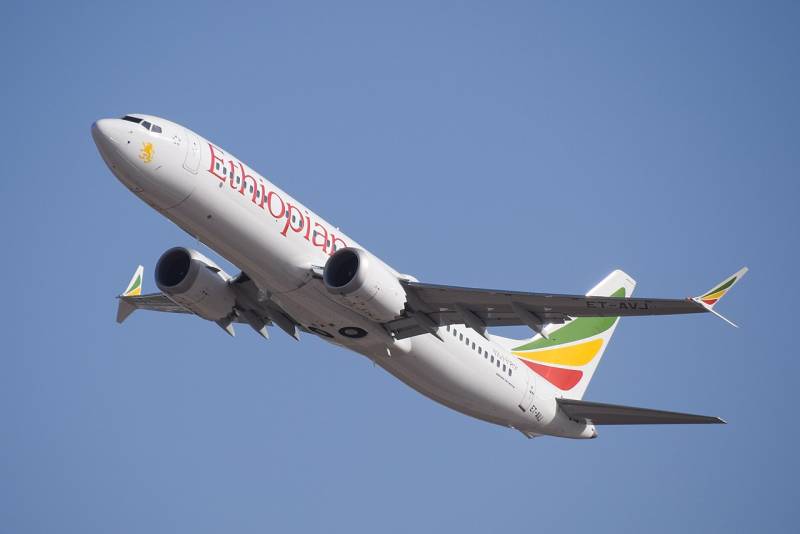 Competitors do not sleep

Airbus knows best the answer, which has received 11830 orders and delivered 6456 aircraft over the past twelve years. Roughly speaking, as much as Boeing. Airbus can now feel even more confident in the market and promote goods more aggressively. By the way, it has now become known that Indonesia is canceling an order for 49 Boeing 737 Max 8s ...

However, as some analysts say, Europeans simply will not be able to significantly increase the production of cars. Enterprises are already loaded for many years to come. As for Boeing, it will have to be more careful about the description of the device of its aircraft. “There was no MCAS description in FCOM (Flight Crew Operations Manual, - Reporter). Although the abbreviation was on the list of these, ”writes Denis Okan. This, of course, is strange.

Some important conclusions by the Americans have already been made. As early as March 14, Boeing Corporation recommended suspending the operation of all 737 MAX aircraft, although bans on the operation of machines had already been introduced by everyone who could. It also became known that Boeing plans to release a software update for the 737 Max family aircraft in about ten days. This is, without a doubt, the simplest and most correct solution. However, the reputation of the new 737th will still be very much tarnished.

Will Russia be able to take advantage of this? You can, of course, dream up, but it is better to give a short and honest answer: "no." It's all about the difficulties of the MS-21 itself - a conditional competitor to both the Boeing 737 MAX and the Airbus A320neo. Recall that now the MS-21 airliner exists only as a prototype (recently a third test board soared into the sky). 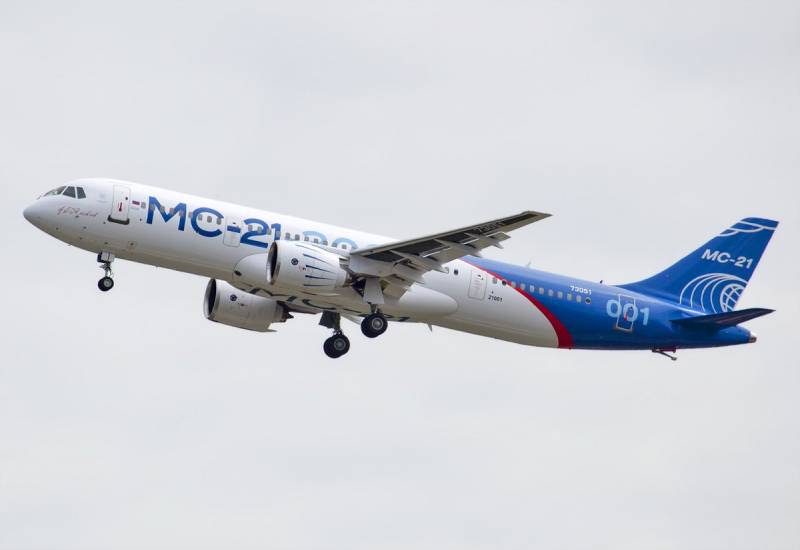 The most unpleasant for the project is sanctions. The West easily blocked the purchase of raw materials from the American Hexcel and Japanese Toray Industries, so that the aircraft was left without a composite wing. Earlier it became known that the creation of the Russian wing will require an additional 2,7 billion rubles and, which is also very important, time. Due to this kind of perturbation, the MS-21 aircraft will be able to start mass production no earlier than 2021. Finally, the third important outcome of the sanctions will probably be the rise in price of the aircraft.

Although even if its value does not “fly up”, it is still far from every customer will want to contact a country that may be banned. Aircraft need not only to buy, but also to discuss, repair. All this requires the closest possible cooperation between the supplier and airlines throughout the world. Policy here plays if not the main, then one of the most important roles.
Ctrl Enter
Noticed oshЫbku Highlight text and press. Ctrl + Enter
We are
The sky will be Chinese: big plans for the Comac C919
MS-21 airliner: there are risks, there is no plane
Reporterin Yandex News
Read Reporterin Google News
2 comments
Information
Dear reader, to leave comments on the publication, you must sign in.