What threatens Russia with the Serbian Maidan?

March 18 2019
6
The Balkans is a traditional “European powder magazine” and a place of collision between the “Russian” and “Western” worlds. After the collapse of Yugoslavia, Serbia was probably the only truly friendly country in this key region of the Old World. The United States of America has begun to develop a certain program "to combat Russian activity in the Balkans." And what do we see? 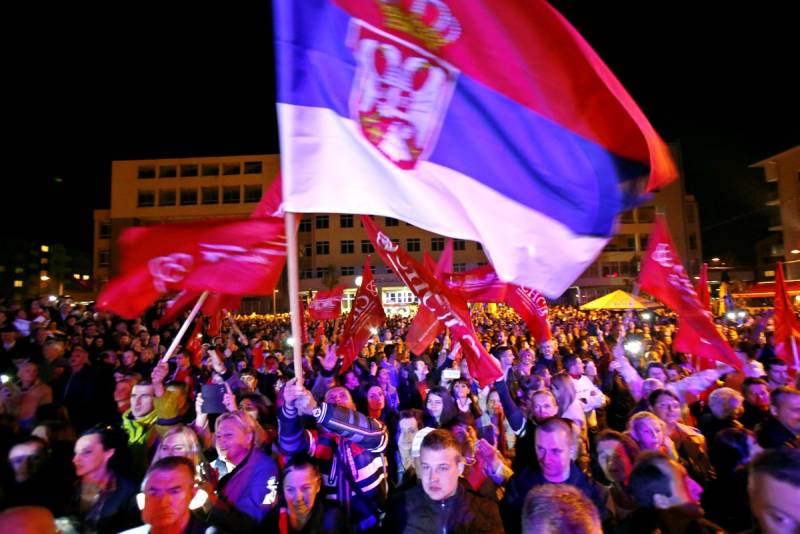 The protests in Serbia since December last year have moved to a new level. Protesters massively took to the streets of Belgrade, some wearing yellow vests. A group of activists broke into the building of the Serbian television center, and only thanks to the correct actions of the police managed to avoid human casualties. The word "Maidan" soars elusively in the air. President Vučić, who was familiar with the Ukrainian events, warned that the authorities would react harshly to acts of violence. Recall that the protests began right before the visit of President of the Russian Federation Vladimir Putin to Serbia and have not stopped since then.

Who took to the streets? Very diverse representatives united against the current government political forces. They are leftists, liberals, and center-right people, supporters and opponents of European integration. They have no common constructive program, they were united by a common protest against President Vucic and the demand for his resignation and early re-elections:

The only requirement we put forward is the cessation of the rule of a poor political regime. We want elections, but freedom must come first.

Protesters call Vučić a "thief", who in response to the opposition - "oligarchs" and "fascists." It is alleged that the unofficial adviser to the president is the son of billionaire George Soros, who has an extremely mixed reputation. In general, the rhetoric is quite familiar in that I saw preparations for the Ukrainian Maidan. It turns out that the State Department intends to overthrow our "brother" Vuchich, like Yanukovych?

For a correct understanding of the situation, it is necessary to realize that President Vucic, on the whole, is not a pro-Russian leader. He is a representative of the pro-European forces. The Serbian population itself is pro-Russian, in contrast to the ruling elites, who are forced to pursue a "multi-vector policy" and flirt with the Kremlin with their rhetoric.

At first, this is a question of Kosovo. Recall that this region of the country, which is most important for the Serbian people, was torn away from it with the active assistance of the United States and Western countries. The opposition accuses Vučić of being ready to recognize the “Republic of Kosovo” and make a territorial exchange. But experts in the Balkans refute this:

In fact, Vučić does not make concessions to the West on the issue of recognizing Kosovo, and the West no longer knows how to force Belgrade to do so. All options were sorted out: negotiations with Pristina have stalled so much that they are unlikely to continue, economic the pressure didn't help.

SecondlyThe Serbs remember very well how several decades ago, NATO countries helped to tear Yugoslavia apart, and then bombed Serbia and its capital. Eurointegration, on the other hand, means Serbia’s indispensable entry into the North Atlantic Alliance, which is essentially immoral and at the top of cynicism.

Thirdly, it is necessary to take into account the special attitude of the Serbian people towards Russia and the Russians, who repeatedly came to the rescue. Recall that the Serbs are the only of all our "brothers" who did not take part in the Second World War against the USSR on the side of the Third Reich. Joining NATO will automatically put Serbia on the other side.

Given these factors, it seems that the United States has decided to replace the moderately pro-Western President Vučić with a more radical one, which will begin to set the Serbs against Russia and accept all Western demands for Kosovo, citing the need for military protection from NATO by the “Russian imperialists”, pursuing a "revisionist policy."
Ctrl Enter
Noticed oshЫbku Highlight text and press. Ctrl + Enter
We are
Putin's phenomenon is Russia's main problem
Ten "defeats" of Putin
Reporterin Yandex News
Read Reporterin Google News
Ad
We are open to cooperation with authors in the news and analytical departments. A prerequisite is the ability to quickly analyze the text and check the facts, to write concisely and interestingly on political and economic topics. We offer flexible working hours and regular payments. Please send your responses with examples of work to [email protected]
6 comments
Information
Dear reader, to leave comments on the publication, you must sign in.