Riots in Serbia: protesters break through to the presidential palace

March 17 2019
4
In the fall of 2000, a “bulldozer revolution” raged on the streets of Belgrade. It was a special operation by US intelligence agencies, as a result of which pro-Western "democrats" came to power. They dismantled the remains of Yugoslavia and transferred the Serbian leader Slobodan Milosevic to the Hague tribunal, in which he later died in prison. 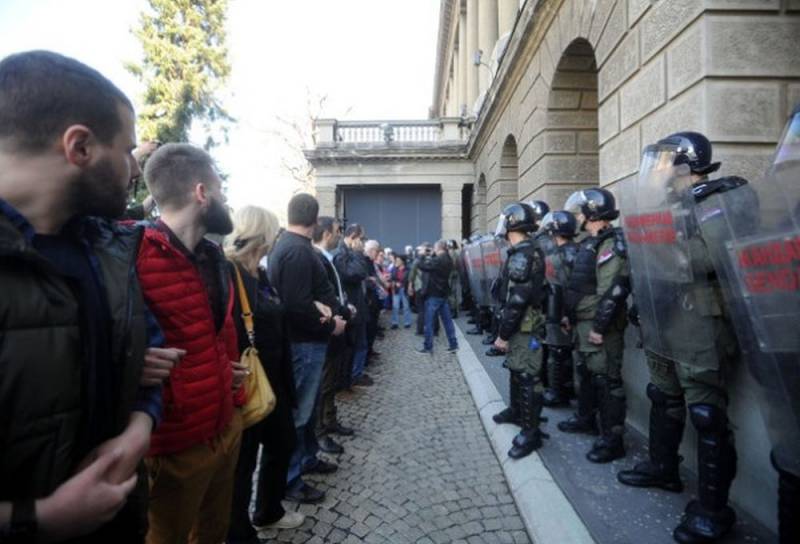 Currently, the next “color revolution” is trying to flare up on the streets of Belgrade, the name has not yet been invented, but it already has a pronounced anti-Russian character, as it is aimed not only at changing the power in the country, but at ending the cooperation between Serbia and Russia. The US is trying to hinder the implementation of Russian gas transportation projects in the Balkans, and at the same time they want to include the entire region in the orbit of the "peace-loving" NATO unit.

On March 17, 2019, the “peaceful protesters” even managed to break through, with the help of a truck, through the cordon of the police to the residence of the President of Serbia, Alexander Vucic. Despite this, at 12:00 (14:00 Moscow time), the President of Serbia began a press conference from the besieged residence. He is confident that the police will ensure security, so he asked reporters not to worry about the "demoniac."

Their only problem is that fewer people are going. There were 1584 of them at night, and now even fewer. So they are nervous because of this. And there is a lot of noise, because the fascist Obradovich and the oligarchs Djilas and Jeremic want to return to power
- Vučić explained to the media. 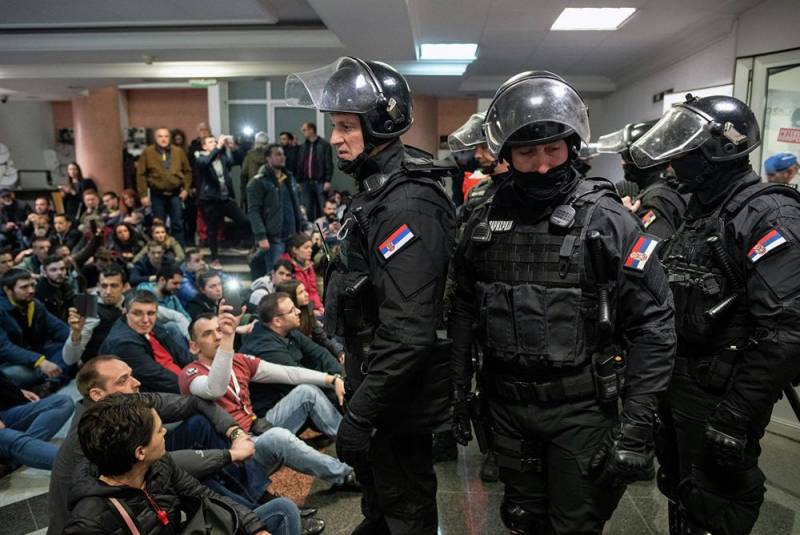 It should be reminded that in the evening of March 16, 2019, the opposition broke into the building of the state television center. A large group was led by the leader of the Doors movement, Bosko Obradovici, to which Belgrade Mayor Dragan Djilas joined. They demanded to provide them with ether for performances. However, they were refused. At the same time, the Serbian police managed to escort uninvited guests from the territory of an important object until 22:00 (00:00 Moscow time), avoiding collisions.
Ctrl Enter
Noticed oshЫbku Highlight text and press. Ctrl + Enter
We are
Lavrov: Russia will consider the creation of a second base in Kyrgyzstan
Serbia intends to conduct joint exercises with Russia more often
Reporterin Yandex News
Read Reporterin Google News
Ad
We are open to cooperation with authors in the news and analytical departments. A prerequisite is the ability to quickly analyze the text and check the facts, to write concisely and interestingly on political and economic topics. We offer flexible working hours and regular payments. Please send your responses with examples of work to [email protected]
4 comments
Information
Dear reader, to leave comments on the publication, you must sign in.