March 15 2019
8
The Ison company began to develop an unmanned spacecraft that can perform maneuvers at hypersonic speed. 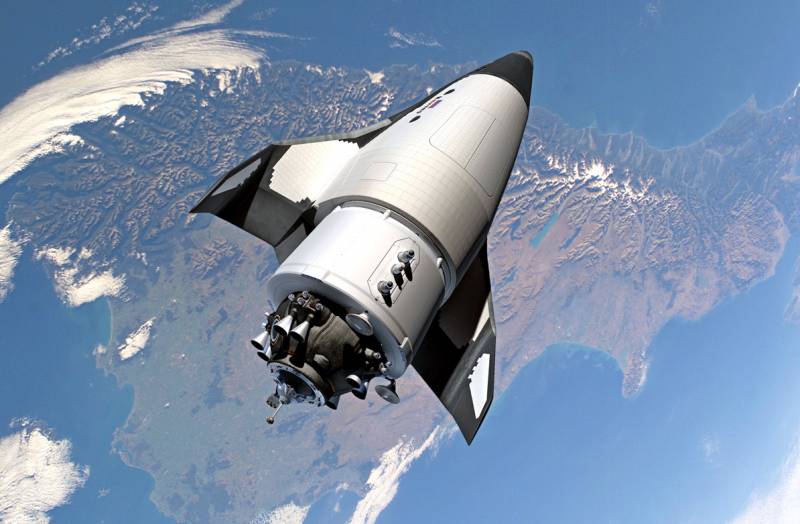 Space industry at a crossroads

In recent years, the Russian space industry has shown the world a huge number of various projects of the future. If some quite succinctly supplement the agenda, others look, to put it mildly, too ambitious. It is enough to recall the projects of the Don and Yenisei superheavy missiles, for which they have not already approved the concept, not only have to be approved after the corresponding improvements.

The reason for such phenomena, in general, is understandable. Every year, the space industry of the Russian Federation faces new difficulties that accumulate like a snowball. Here there are sanctions, and the successes of competitors (primarily SpaceX), and the lack of a clear development strategy for modern Roscosmos, which only the lazy have not kicked in recent times. But most of all, the deplorable situation was affected by the scientifictechnical progress as such.

If earlier the RD-180 liquid-propellant rocket engine could be called the “pinnacle of evolution” (as we know, it was even actively bought by the Americans), now such a statement is rather puzzling. Leading rocket scientists are gradually switching to new types of engines, using, for example, a pair of liquefied natural gas / liquid oxygen instead of a kerosene / liquid oxygen fuel pair. The latter, both in the West and in Russia, has long been recognized as the most promising. The problem is that so far Russia does not have such engines, although work in this direction is underway.

One can criticize the Space Shuttle or the Soviet Buran for an infinitely long time (one and the other had serious flaws), but the general trend is becoming more apparent today: space systems are becoming more and more reusable, in simple terms. This applies to both carriers and spacecraft. And here Russia, which has considerable experience, could declare itself: provided, of course, that a number of problems and contradictions are resolved.

But to aim at creating an analogue of Starship would be a crazy waste of money: it is better to start small. Now, the Ison Russian company has decided to develop a relatively small spacecraft of a completely new type. The company itself is a member of the Skolkovo project. The official website says: "JSC" ISON "was registered in 2011 and carries out its activities in close scientific cooperation with its strategic partners - Project Technique Corporation, Roscosmos State Corporation, FSUE KBMM named after A. Isaev, OJSC "EMZ named after V.M. Myasishchev", FSUE "MOKB" Mars ", FSUE" TsAGI ", etc." 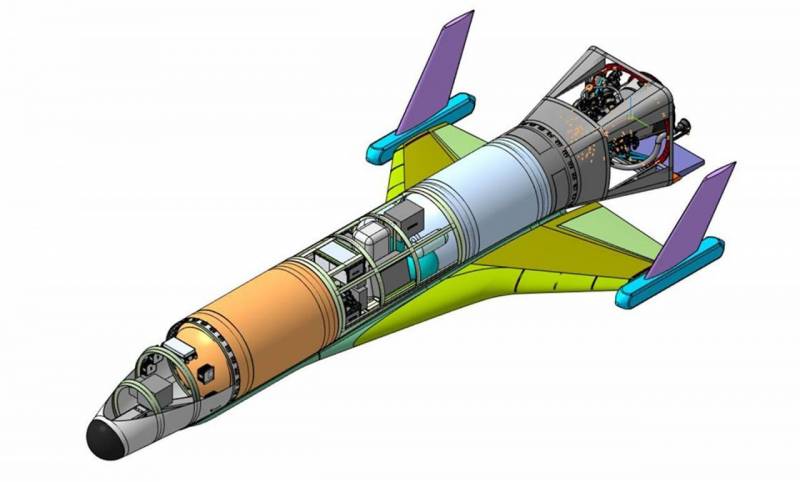 The first images of the RIA apparatus News introduced in February 2019. Strange as it may seem, this can be called a success: often Russian developers do not advertise the appearance of their offspring at all, except, perhaps, for status projects such as Federation. Again, the general concept is thoroughly worked out. Before us is an aircraft-type drone having one engine and capable of controlled flights both in space and in the Earth’s atmosphere at hypersonic speed.

It is worth mentioning right away: of course, we are talking about a prototype. In its future, they will be able to create something in the future that Roskosmos can use in its interests. In theory, such devices can be used to monitor the surface, fight space debris, and even for military tasks. However, these are only assumptions. According to the director general of Eason Yuri Bakhvalov, they do not intend to use the spaceship as a weapon.

It is known that the spacecraft will receive the C5.98M engine: the same one that is used on the Breeze-M booster block. This is a Soviet liquid engine that uses a pair of diazot tetraoxide / heptyl. It is assumed that the spacecraft will be able to fly at an altitude of up to 160 kilometers and put satellites into orbit up to an altitude of 500 kilometers. According to the idea, one orbital aircraft can be launched at least 50 times. 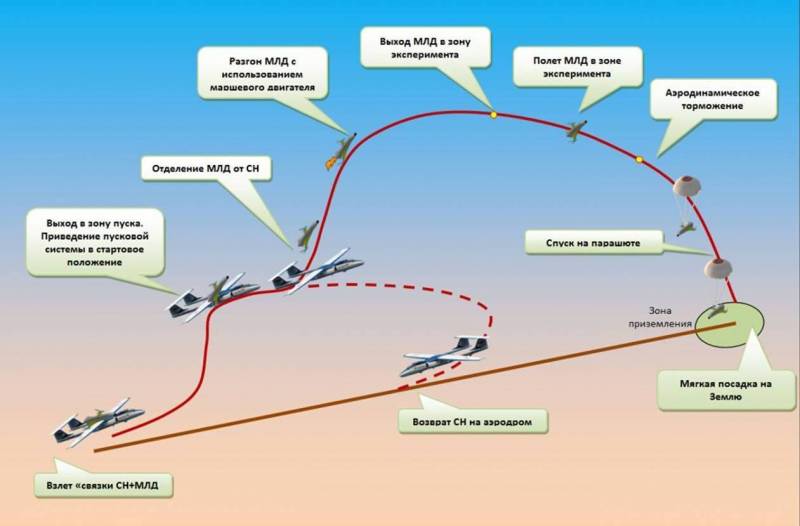 The most interesting is the return scheme. The developers chose the option of the so-called “air launch” - a method of launching from a height of several tens of kilometers, where the launch vehicle delivers the carrier aircraft. The stratospheric aircraft M-55 Geophysics should play its role. This machine, made in only a few copies, has more than an interesting fate. Initially, it was a combat aircraft, which was created to intercept high-altitude reconnaissance balloons that were regularly launched by the Americans and flew into the territory of the USSR. Then, when the balloons left the agenda, they wanted to make the M-55 reconnaissance-strike complex, well, and with the end of the Cold War they decided to turn it into a carrier of spacecraft. As you can see, this idea is still alive. We add that the M-55 is a rather large and lifting aircraft, really capable of raising a hypothetical spacecraft to a certain height. Provided, of course, that it will not be the size of an American shuttle. 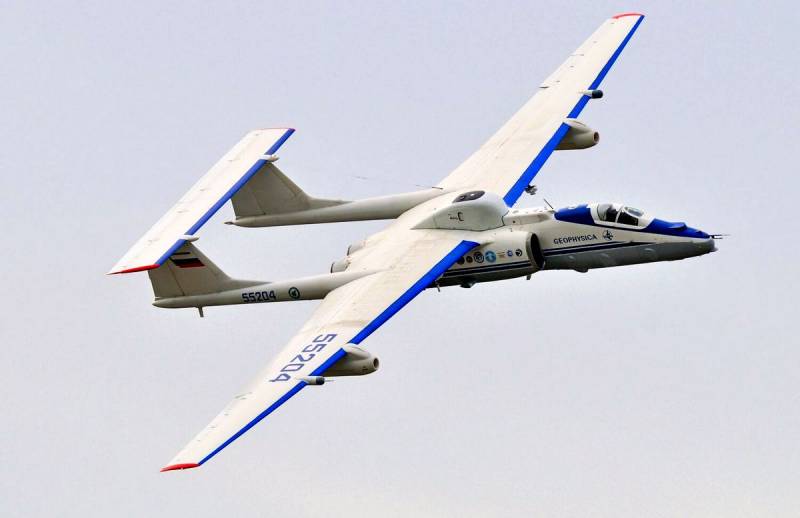 After launching and solving the tasks, the spacecraft from the Ison company should return to the ground, descending by parachute. In other words, he will not land on the runway, like shuttles of past years. Apparently, the creators decided to save on weight. The fact is that when choosing an airplane landing scheme, the device would have to bear the additional load in the form of landing gear elements and associated systems and subsystems, which, of course, would make the launch more expensive and complicate operation. But the parachute scheme is also not without flaws. Indeed, in this case, the spaceplane will be hit when it touches the surface of the Earth, albeit not the strongest. What is normal for disposable vehicles may not be acceptable for a fully reusable spacecraft. Therefore, so far, the choice of landing scheme is obviously not final.

Let's talk about analogues. The most significant of them is the famous American Boeing X-37. This is an experimental orbital aircraft designed to test future technologies. The device is able to quickly change orbits, maneuver and, in theory, can be used to solve military problems. Various experts (including Western ones) are talking about this more and more often, emphasizing that there are not so many peaceful tasks for the X-37. That is, they are, however, they can be successfully performed by existing, much cheaper and easier to operate spaceships. At the same time, the ability to make sharp maneuvers, carry a solid load and be in orbit for a long time can be very useful, if we are talking, for example, about intercepting enemy satellites. This is not specifically about the X-37, but about the spacecraft of the future, which can be performed on its basis. Simply put, the Boeing X-37 is really experimental, but it's hard to say what exactly they are experimenting with in the States. 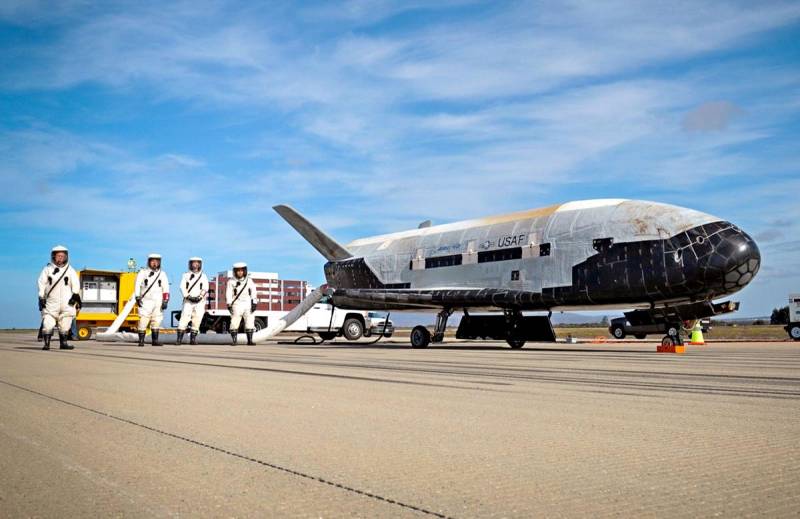 Perhaps the Ison project has also become part of a broader reorientation of the Russian space department to defense tasks. In this case, he has a chance of implementation, similar to how the United Aircraft Corporation is trying to build an inconspicuous strike drone "Hunter". However, these are only assumptions. And the whole space industry cannot provide only one defense: this is a dead end.
Ctrl Enter
Noticed oshЫbku Highlight text and press. Ctrl + Enter
We are
Quiet Don: What is heard about the most powerful rocket in Russian history
Trillion "Baby": Why Russia needs a super-heavy Yenisei rocket
Reporterin Yandex News
Read Reporterin Google News
Ad
The publication is looking for authors in the news and analytical departments. Requirements for applicants: literacy, responsibility, efficiency, inexhaustible creative energy, experience in copywriting or journalism, the ability to quickly analyze text and check facts, write concisely and interestingly on political and economic topics. The work is paid. Contact: [email protected]
8 comments
Information
Dear reader, to leave comments on the publication, you must sign in.