The flight of the American "Dragon": the Russian "Unions" remained out of work

March 4 2019
21
There have been many discussions and debates about this spacecraft. It looks like a huge futuristic bullet. True, his flight speed is much higher. We are talking about the brainchild of SpaceX Corporation, which was called Crew Dragon ("Passenger Dragon"). 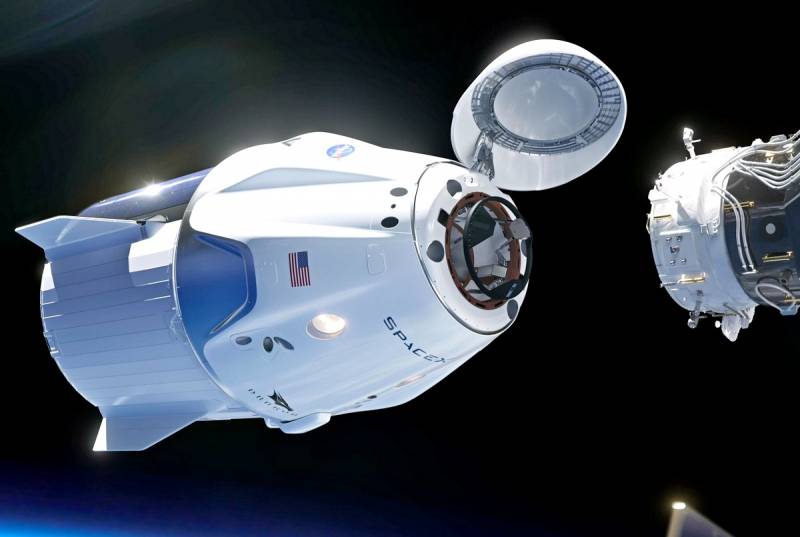 The first commercial ship of the United States for many years, designed to deliver people to the ISS, launched from platform 39A in the Space Center. Kennedy March 2. Falcon 9 was used as a launch vehicle. The next day, he successfully docked to the International Space Station.

As a matter of fact, there is nothing “supernatural” in the new spacecraft. Earlier, more than 39 ships for various purposes, which had more ambitious tasks, not to mention their technical characteristics, started from the same site 109A. However, it is worth noting that they all belonged to extremely expensive state projects of a national scale.

Crew Dragon is something else. So, professor emeritus of space policy at John Washington University, John Logson noted that the new SpaceX device will be a modest step that will bring humanity closer to more affordable commercial space flights.

In general, it is. Government project Crew Dragon is not like all the previous ones. And SpaceX Corporation can become exactly the company that will open the era of entrepreneurship in space. That according to Chad Anderson, the CEO of Space Angels, now deserves great respect.

At the moment, the priority goal for NASA is to "launch an American spacecraft with American astronauts, which will start on American soil." This will happen for the first time since 2011, when the US space shuttles stopped "carrying" people to the ISS.

All this time, for the delivery of American representatives to the International Space Station, I had to rent a place in the Russian Soyuz spacecraft. Now, after the Crew Dragon has successfully passed the tests, astronauts Robert Benken and Douglas Hurley will be able to make the first flight aboard the new device in July this year.

The eight-meter “capsule”, designed for 7 passengers, was able to take 200 kg of payload with it as part of a test flight. The mission was called Demo 1. Its main goal was a five-day docking with the ISS and further flooding off the coast of Florida. The important thing is that the ship itself and the Falcon 9 booster are designed for reusable use, which will save millions of dollars.

However, despite the success of the project, NASA still added a fly in the ointment for the honey barrel for SpaceX. The corporation, owned by Mask, has a competitor in the person of Boeing. The latter plans in April to conduct a test flight of its version of the device called the CST-100 Starliner. If successful, astronauts Eric Bo, Nicole Aunapu Mann and Christopher Ferguson will fly it in August.

It is worth noting that Boeing has been playing the role of an aerospace contractor for NASA for several years. As it became known, Boeing will receive $ 4,2 billion for identical missions, and SpaceX - about 2,6 billion. Such a noticeable difference is due to the fact that the competitor Mask will launch using the "disposable" Atlas 5 rocket, which, naturally make them more expensive.

And also, with a successful set of circumstances, Boeing will have the opportunity to seize the palm. However, this is not so important. After all, as the same John Logson said, "the US is now faced with the task of restoring access to space and freeing up hope in the Russians."

Russian "Unions" remain out of work?

The US space industry seems to have entered its heyday and is not going to slow down. Jeff Bezos (Amazon founder) sponsors Blue Origin, Richard Branson sponsors Virgin Galactic. In addition, other ambitious projects are constantly coming into the industry. But still, the last word today remains with SpaceX.

During the Cold War, when space programs were an important part of the confrontation between the USA and the USSR, huge funds were allocated for them. Naturally, aerospace companies benefited from this maximum, as they understood the extreme importance of each mission for the government and knew that they could continue to earn even if they went beyond the budget. After all, the exact cost of this or that space program was not known to anyone at that time, and there was a "eloquent" answer to the dissatisfaction of taxpayers in the spirit of patriotism: "The future of US freedom is at stake."

Over time, the Americans moved to reusable shuttle shuttles, which were designed to reduce the cost of flights to the ISS, but this did not happen. Starts were still unreasonably expensive.

A breakthrough for the American astronautics occurred in 2009, when SpaceX published estimated prices for the commercial launch of cargo. Now, customers knew exactly how much money they needed to attract for the implementation of a mission.

Despite the fact that 412 companies "invested" in SpaceX, and the size of investments amounted to 18 billion, business was not so easy. There were missile launches and mass layoffs of employees.

But still, heaven opened before SpaceX. And this merit belongs entirely to the aggressive and uncompromising policy of the company. Now Washington welcomes the participation of private firms in space programs, and the cost of delivering cargo and astronaut flights into space has become more affordable than ever.

Now that prices have ceased to be “cosmic,” ideas and proposals from various stakeholders have surged, as if from a “cornucopia”. True, to a greater extent we are talking about the launch of satellites, and not astronauts.

However, anything can change at any time. The ambitious Elon Musk and his colleagues are sure that if the upcoming mission involving Crew Dragon and astronauts Robert Benken and Douglas Hurley goes without a hitch, then the next goal of SpaceX will be Mars.
Reporterin Yandex News
Reporterin Yandex Zen
21 comment
Information
Dear reader, to leave comments on the publication, you must sign in.