Quiet Don: What is heard about the most powerful rocket in Russian history

March 2 2019
6
Recently it became known that Russia wants to create the most powerful of all ever designed domestic missiles. 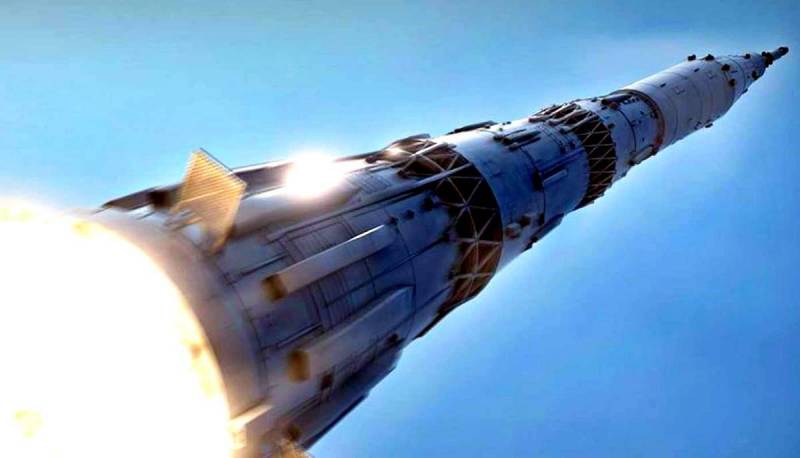 The most powerful rocket

Before the passions around the promising Yenisei had calmed down, the Russian space industry started talking about an even more powerful carrier. With an equally poetic name - “Don”. Given the choice of the name “Irtysh” for the new Soyuz-5 (not to be confused with a Soviet-developed missile), the real dependence of the space department on the water element can be traced. However, the names are not so important, if only because of the speed with which they change. Apparently, the whole point is in the mood of the new head of Roscosmos Dmitry Rogozin, who, recall, recently proposed to change the name of the ship “Federation” to another, because it is “too feminine”. “Still, the ship should not be called like a girl, but by a man’s name,” said the current head of the space industry of the Russian Federation.

But whatever the name of the promising missile, it can already be said to go down in history. Neither the Soviet Union nor the modern Russian Federation had a more powerful missile. If someone forgot, then recall that the most powerful rocket in Soviet history was the N-1 to launch astronauts to the moon. With a starting weight of almost 3000 tons, it could launch up to 100 tons of cargo into a low reference orbit. The fate of the rocket, however, was difficult: all four launches ended in accidents, and then the project was completely closed. Similar characteristics were possessed by Energy (the one that was part of the Energy-Buran complex). Its most powerful version - Vulcan - has never been realized. 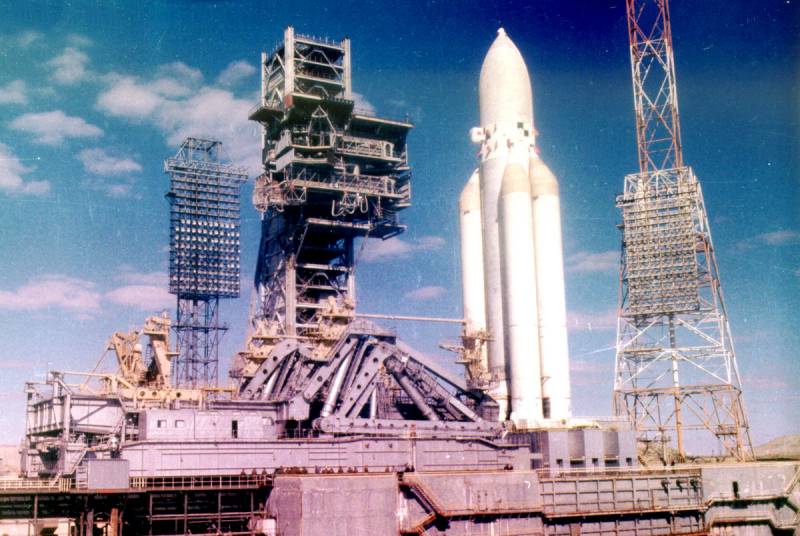 The difference between the Don and the Yenisei will be the addition of one more step, which will make the Don more load-lifting than the Yenisei. The Yenisei (or the first-stage superheavy class launch vehicle, STK-1) will be able to put payloads from 88 to 103 tons into low Earth orbit, and from 20 to 27 tons into lunar orbit. At Don (or the second-stage superheavy class launch vehicle, STK-2), these figures will be 125-130 tons and 32 tons, respectively
- declared RIA News source in the space rocket industry.

Thus, we can expect that the Don rocket will become a thickened version of the Yenisei, which received the fourth stage. Nowadays, it is quite difficult to imagine such a "high-rise building", especially when you consider that even the superheavy Falcon Heavy has two steps. However, the aforementioned H-1 had, for a second, five (!) Steps. And they all should have worked fine. At least on paper. 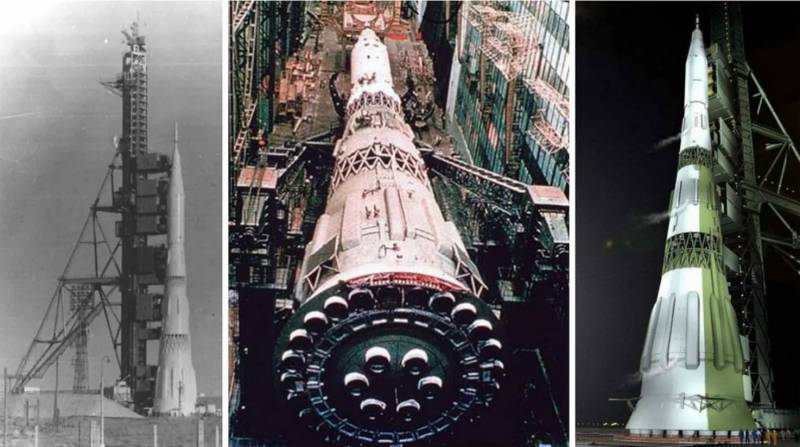 Super Heavy Class H-1 Booster
It may seem that the Don will be just a variation of the Yenisei, but this is not entirely true, since all issues related to the creation of superheavy rockets - the most complex, expensive and heavy carriers of all - require special control and incredible efforts. That is, just take and add one step will not work. Just look at the torment of SpaceX with the Falcon Heavy, which, in general, was the development of the long-running Falcon 9.

To understand more specifically what Don will be, you need to look at its prototype in the person of the Yenisei, which we already know enough about. Her general concept looks like this

- The first stage will consist of 5-6 blocks from the promising Irtysh missile. The engines chosen were RD-171MV;
- The second stage is one unit with engines RD-171MV or RD-180;
- The third stage will become a modification of the unit from the Angara-A5V launch vehicle.

The described concept has both obvious advantages and quite noticeable disadvantages. Let's start with the good. Russian promising superheavy rockets are based on reliable and proven engines based on the RD-170 - the Soviet liquid rocket engine developed by Energomash in the 80s and designed, which is noteworthy, for another superheavy rocket - Energia. She, as we know, has long been “dead”, but engines built on the basis of the 170th are in demand both in Russia and in the West (RD-180 is used for the Atlas V American missile).

The flip side of the coin may be that by the time the Yenisei and Don rockets are tested, the engines will already be out of date. Even if nothing revolutionary appears (perhaps it’s not worth waiting for a new nuclear rocket engine), developed countries can already by the end of the 2020s completely switch to new, more economical methane engines, the advantage of which was recognized in Russia itself.

To the greatest extent these requirements (the requirements of the modern market - approx. Reporter) are met methane today, since it has a more developed raw material base, and surpasses kerosene in energy
- said in 2018 the general director of Energomash Igor Arbuzov. 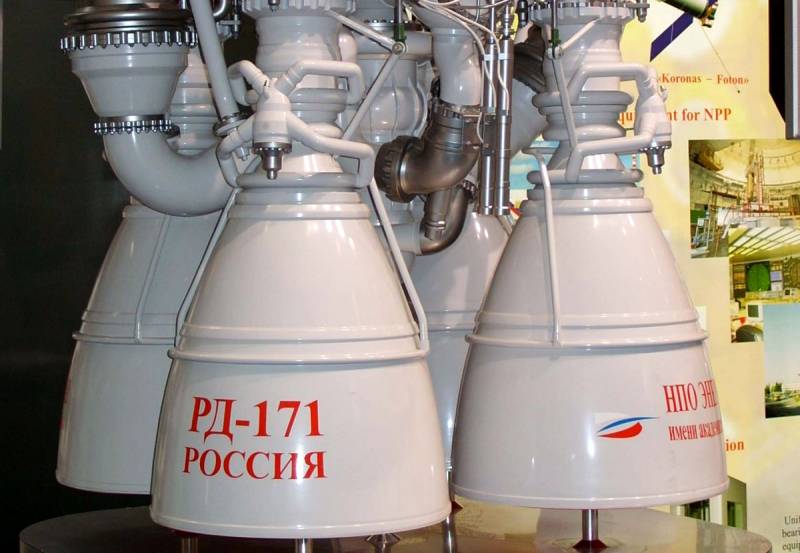 A promising Russian methane rocket engine, which has already begun to develop, was called RD-169. We are talking about a new development based not on Soviet technologies, but on the developments of the 2000s. However, the timing of his tests is very vague (de facto, nothing concrete has been announced), and since last summer, no important News about RD-169 no. It is unknown whether many other ambitious Russian space projects will suffer its fate, but when the survival of the entire industry is at stake, there are not many options. Either do something modern, or do nothing.

Flying in a dream and in reality

According to the source mentioned above, the Don rocket will carry out its first flight in 2029 as part of the sending to the moon of the take-off and landing complex, which they intend to use to work out the lunar missions of the future. As a conditionally typical load, they are now considering the Federation manned spacecraft (which is no longer the Federation), the lunar-landing module for the future lunar base.

Strictly speaking, most likely there will be no other load for the rocket, since it is possible to launch satellites and spacecraft to the ISS with the help of cheaper medium and heavy class rockets. And to use superheavy media, which by default is much more expensive than them, there is no sense. Simply put, the Don is needed exclusively for the realization of Russia's lunar ambitions, which are not fully understood and that are constantly changing, following economic situation in the country. For the sake of justice, Russia here is not a unique example. NASA is also constantly rushing about in its dreams: from the moon to Mars and vice versa. On the other hand, the American taxpayer is a generous taxpayer. And the States can afford to start the lunar program, and then collapse it, without inflicting the fatal damage to its space industry. In this case, Russia will have to act more selectively. If, apart from the Moon, there are no other goals for flights (and, most likely, it will turn out that way), then it makes sense to cooperate as close as possible with Europe, the USA or China to achieve the goals set.
Ctrl Enter
Noticed oshЫbku Highlight text and press. Ctrl + Enter
We are
Soyuz-7 rocket: first, real, reusable
How do you like this, Elon Musk: Soyuz-5 risks repeating the fate of Angara
Reporterin Yandex News
Read Reporterin Google News
Ad
We are open to cooperation with authors in the news and analytical departments. A prerequisite is the ability to quickly analyze the text and check the facts, to write concisely and interestingly on political and economic topics. We offer flexible working hours and regular payments. Please send your responses with examples of work to [email protected]
6 comments
Information
Dear reader, to leave comments on the publication, you must sign in.