Kaliningrad can relax: Rail Baltica will never be built

February 28 2019
0
We have repeatedly written about the construction of a railway in the Baltic states called Rail Baltica, indicating that with its help, NATO could more quickly deploy its military contingents in this region, for example, in case of an attempt to attack Russian Kaliningrad. Well, you can, as they say, relax: the next "European integration" project was a complete dummy. The rails, which, according to the original plan, were to “take the Baltic States away from Russia” and serve as “protection against its aggression”, turned out to be a road to nowhere. 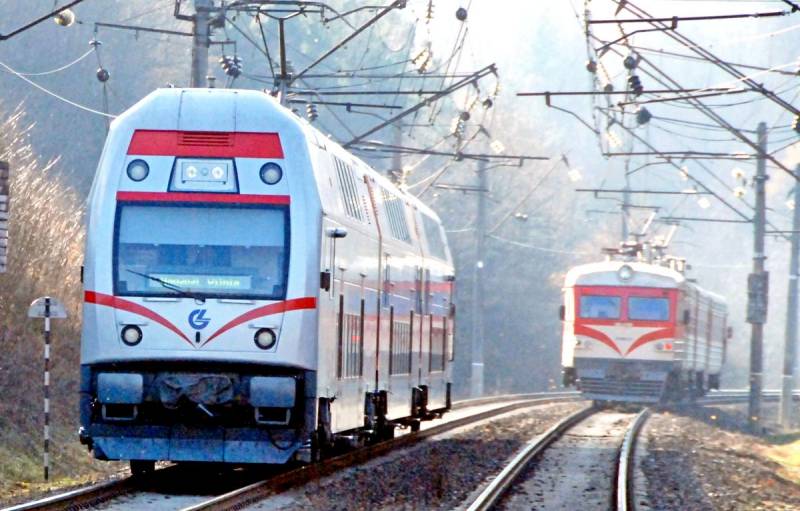 No wonder - after all, having conceived this “construction of the century”, its inspirers and organizers tried to create not even parallel, but the most perpendicular reality. From time immemorial, railways in the Baltic were laid from East to West. Why is that? Yes, because their purpose was to connect first the Russian Empire, and then the Soviet Union with ports on the Baltic Sea. Quite intelligible and reasonable economic the rationale that gave life to these steel transport lines. The idea of ​​building Rail Baltica was originally based not on the economy, but on ideology. The narrow-gauge “line” of the railway going from North to South was to not only connect Riga, Tallinn, Kaunas, but also Warsaw with Berlin and even Venice! It was to become a symbol of a complete break with Russia, with the “damned communist past” and “Soviet occupation”.

The fact that this “highway” was destined to become a knowingly unprofitable project was clear from the beginning. Neither passenger traffic, nor the volume of freight traffic that could make it cost-effective, never existed in nature. And after the Baltic countries completely broke off economic and economic ties with Russia, the construction of the road, which the Baltic states needed, roughly, like the Zulu cosmodrome, completely turned into sheer madness. Why do we need a “piece of iron” in those parts of the world where you can get to anywhere in the car much faster, cheaper and easier? By the way, this also applies to trips to Europe. But the whole railway structure, in addition to the construction, must also be maintained, maintained in working condition, and, in the end, protected! However, officials from the Baltic micro-powers did not visit such mundane thoughts either at all, or simply did not embarrass them at all.

Perhaps the truth, and another explanation - “going out” was going to the money of the European Union, which declared Rail Baltica “part of the Pan-European Corridor No. 1” and, adding to the list of “EU priority projects”, included in the program of European Communication Networks (TEN-T) on 2007-2013, and later in the Connecting Europe Facility project. True, Brussels did not agree to finance the full cost of the construction, but only half. The remaining 50% were to find those countries on whose territory the road, in fact, was supposed to pass. But, since it was a question of billions of euros, in the Baltics they decided not to twist their nose, but to “run through” what they give. The construction began ... grandiose plans. Clearly blew New Vasyuki. What they just didn’t dream of was a new train station in Riga, bridges and even tunnels under the Baltic Sea. In a word, solid hubs with hyperloops.

In reality, everything turned out to be much more modest. The first rail section, which could be attributed to Rail Baltica, was the “highway” seven kilometers between the centers of world civilization Motskava and Szastokai, the opening of which was celebrated in a festive atmosphere. I don’t know if gold crutches were hammered, banquets were rolled up, but I suppose it was ... Actually, it became possible to speak about real construction as such after the new railway in 2016 connected Warsaw and Kaunas. Given that the contract for the construction of Rail Baltica was signed by the ministers of Estonia, Latvia and Lithuania in 2001, the pace is impressive. In any case, there were much more scandals, corruption charges and loud dismissals in the joint venture RB Rail created for the project, than the laid rails and sleepers. What was the cost of one epic conflict between the representatives of Latvia and Lithuania, who could not share the main chair among themselves. The fight of a beaver with a donkey of all Baltic scale ...

The real movement along the “great Trans-Baltic path” - both in legal and in the civil engineering aspect began only from the end of 2017. Many experts believe that some kind of new “life” in this initially stillborn project was inspired by the escalation of Russophobic-militaristic sentiments in the region, which are zealously inflated both by Poland and the Baltic countries. However, in the most interesting place, as they say, a bummer came up. Big-big ... The other day, the Minister of Transport of Latvia Talis Linkits made a stunning statement, who told the world: “That's it! Arrived ... The train does not go any further. "

According to the official, the construction of Rail Baltica on the territory of Latvia, which is, as you can easily see with the help of a simple geographical map, exactly in the middle of the “highway”, is postponed indefinitely. The reason is banal to shivering - the simple-minded Linkits frankly admitted: With the money that the European Union has allocated, it’s impossible to build anything bigger than a children's railway for toy trains! Well, the minister literally said: “nothing big” ... But Latvia, which has escaped from under the Soviet occupation and is flourishing in the family of European peoples, simply does not have its own money. Even on the model of manual trolley. Linkites, trying to save face, tried to talk about the “postponement of construction, which they planned to start in 2020 for a couple of years,” but only those who are far from the “accounting” of the European Union can deceive such excuses. In fact, you can finally put an end to Rail Baltica.

Just in 2020, the seven-year financial period of the EU ends. "Be careful, the doors are closing! Who did not have time - he was late! ” There will be, of course, the next one - but absolutely nothing shines in Latvia (and not only it). It is known for certain that Rail Baltica, as well as all other undertakings related to the Baltic States, are not included in the list of promising projects of common interest of the European Union (projects of common interests; PCI). The lists, as they say, do not appear. Brussels, you know, you can understand - initially the cost of building the railway was estimated at "some" 3.6 billion euros. Then this amount somehow quietly doubled - to almost 6 billion. Recently, voices have begun to sound louder (including from Latvia), which, probably, will also be scarce 7-8 billion. In the European Union they listened to all this, watched, satanically slowly - and finally got enraged: "Shish to you with oil, and not billions on your long journey in the dunes!" In any case, the EU Commissioner for Transport, Violeta Bulz, made it clear that the prospects for Rail Baltica after 2020 are covered in fog of uncertainty and are extremely doubtful. There would be the consequences of Brexit!

So, most likely, no “Abrams” and other “Leopards” with vile and aggressive goals for the “high-speed Baltic narrow gauge” will not rush. Due to the lack of such ... Scattered sections of Rail Baltica will remain a "monument" to stupid ambitions and Russophobia, leading, as you know, to nowhere.
Ctrl Enter
Noticed oshЫbku Highlight text and press. Ctrl + Enter
We are
Three years left: Ukraine will be sold in parts
“The dark August night came the one whom the Ukrainians were waiting with horror”
Reporterin Yandex News
Read Reporterin Google News
Information
Dear reader, to leave comments on the publication, you must sign in.