February 26 2019
0
US aviation intelligence at the borders of Russia does not stop for a single day. The day before we Reportedas the Americans intensified intelligence in the Black Sea. And now, the US Air Force strategic drone RQ-4B Global Hawk made a many-hour reconnaissance flight along the demarcation line in the Donbass, during which it approached the borders of Russia eight times. 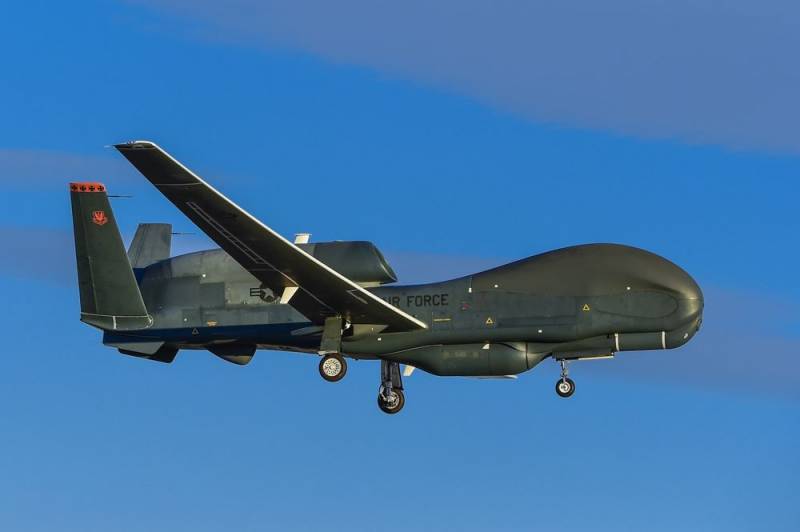 It should be noted that Global Hawk can be in the sky for up to 30 hours. Therefore, it is not surprising that the aforementioned "strategist" flies from afar. After all, he is based, along with the patrol Boeing P-8A Poseidon, at NATO airbase Sigonella (Sigonella) on the island of Sicily (Italy).

Western aviation monitoring sites report that they detected the take-off of the aforementioned Global Hawk from the indicated air base and traced its entire route. He is very tortuous, intricate, but interesting. The drone flew over Italy, Greece, Bulgaria, Romania, Moldova and Ukraine. That is, he did not “cut corners” and, on a campaign, conducted reconnaissance of these territories without informing his allies about this so as not to upset them.

Arriving in the Donbass, the "strategist" began to fly along the demarcation line back and forth, making one turn over the Sea of ​​Azov, and the second at the junction of the borders of Russia, Ukraine and the LPR in the Luhansk region, not flying into the airspace of Russia.

It should be recalled that the RQ-4B Global Hawk is not in vain considered strategic. And this is connected not only with the duration of his flight. The thing is that he has the corresponding "filling". The equipment and equipment on board allows the drone to collect data and conduct reconnaissance to a depth of more than 300 kilometers.
Ctrl Enter
Noticed oshЫbku Highlight text and press. Ctrl + Enter
We are
USA intensified aerial reconnaissance near Crimea
US sent planes to monitor Crimea
Reporterin Yandex News
Read Reporterin Google News
Ad
We are open to cooperation with authors in the news and analytical departments. A prerequisite is the ability to quickly analyze the text and check the facts, to write concisely and interestingly on political and economic topics. We offer flexible working hours and regular payments. Please send your responses with examples of work to [email protected]
Information
Dear reader, to leave comments on the publication, you must sign in.