In Kiev, expect a grand failure Poroshenko in Munich

February 15 2019
1
The 15th Munich Security Conference is being held in Germany from February 17 to 2019, 55. Moreover, the Germans with the agenda already have decidedthey are worried about the threat from the United States. However, the Ukrainian delegation, represented by Petro Poroshenko, decided to preoccupy everyone with "evidence of Russian interference" in the elections in Ukraine. 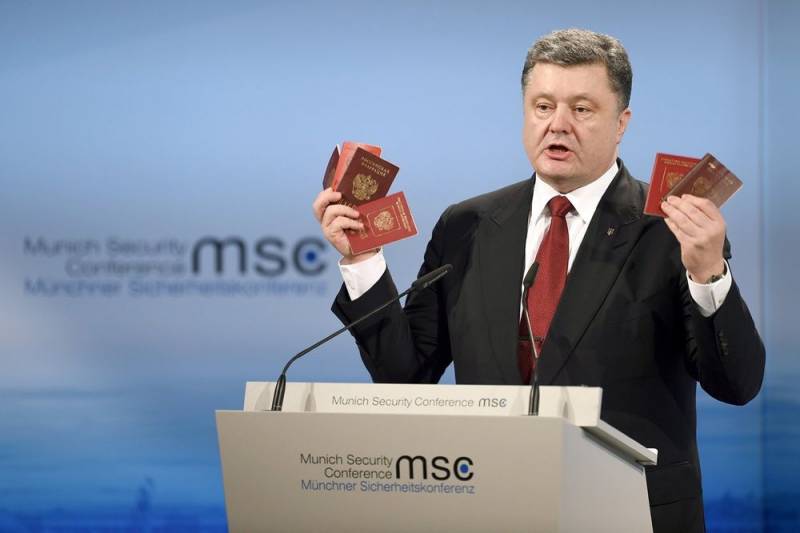 It should be noted that no one has ever found out the mental state of health of Ukrainian presidents. Therefore, it is not surprising that Poroshenko is convinced of the strong desire of the Kremlin to intervene in the electoral process in Ukraine, after which the "free nation" may face the revenge of the "totalitarian empire." Indeed, according to Poroshenko, Moscow desperately wants to block the movement of Kiev to the West and return it to its sphere of influence.

At the same time, Poroshenko said on the eve that only part of the information on “Russian intervention” would be made public at the conference.

I will release some of the information about Russian intervention during the Munich Security Forum
- Poroshenko said hopefully.

The thing is that the agency under the leadership of Pavel Klimkin, which is still called the Ministry of Foreign Affairs, did not have time to properly prepare for this issue by the beginning of the conference, i.e. come up with as many different fakes as possible. So the "guarantor" will voice what is, and then simply begin to improvise. He is not used to it, since he has been doing this for the fifth year.

In this regard, some representatives of the Ukrainian establishment fear that Poroshenko would simply ruin such an important conference. For example, the deputy of the Verkhovna Rada of Ukraine (since 2006) Yuriy Miroshnichenko, who is currently included in the Opposition Platform - For Life, believes that the Ukrainian delegation will traditionally raise the issue of Crimea and Donbass. Miroshnichenko spoke about this on February 15, 2019 on the air of one of the Ukrainian TV channels.

Ukraine can fulfill its task at this conference - to pose the problem of Donbass, Crimea and form support from our Western partners ... We must formulate not only our vision of the situation, but also offer realistic scenarios for solving the Crimea problem, first of all, solving the Donbass problem
- said Miroshnichenko.

Today’s conflict in Ukraine could be the beginning of a great confrontation on the European continent. We should not draw attention to the dangers of such incidents as in the Kerch Strait, everyone is aware of this already. We must be active in the matter of how to act? We are not the first to encounter such problems. We have a number of recipes, standards, international legal acts that govern the actions of countries in such cases. From the whole set of tools, we had to formulate a clear plan, coordinate it with the OSCE, and attract the United States and European partners. And to promote it through the platform of the Munich Conference, through the UN, etc. with a single position. Thus, we would formulate our agenda for unleashing the problem of war.
- added Miroshnichenko.

In this regard, we will follow the development of events with undisguised interest and inform our readers.
Ctrl Enter
Noticed oshЫbku Highlight text and press. Ctrl + Enter
We are
US State Department: Venezuelan Civil War Scenario Ready
Washington talks again about Russian intervention
Reporterin Yandex News
Read Reporterin Google News
1 comment
Information
Dear reader, to leave comments on the publication, you must to register.
I have an account? Sign in